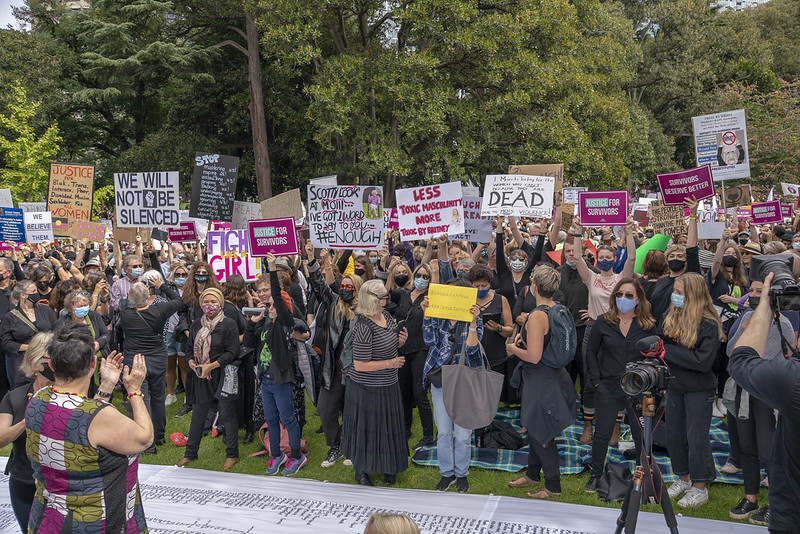 Over 110,000 people in at least 40 cities and towns took part in the demonstrations, according to event organizers. Janine Hendry, the main organizer, told the New York Times that “there are huge numbers of women around the country that have had enough, quite frankly, of their appalling response to sexual assault and harassment.”

“We want change and we want it now,” she said.

Morrison’s conservative Liberal Party has been roiled by recent sexual assault allegations. Earlier this month, Australian Attorney-General Christian Porter confirmed he stands accused of raping a 16-year-old in 1988 who, after writing down what she said happened to her, killed herself last year. Porter denies the allegation.

On the lawn of Parliament House in the capital city of Canberra, Brittany Higgins—a former Liberal staffer who says she was raped by a male colleague in a government minister’s office in 2019—delivered a powerful address that brought many in the audience to tears.

“We are here because it is unfathomable that we are still having to fight this same stale, tired fight,” said Higgins. “My story was on the front page for the sole reason that it was a painful reminder to women that it can happen in Parliament House and can truly happen anywhere.”

“I was raped inside Parliament House by a colleague and for so long it felt like the people around me did not care about what happened because of what it might mean for them,” she continued. “It was so confusing because these people were my idols. I watched as the prime minister of Australia publicly apologized to me through the media, while privately the media team actively undermined and discredited my loved ones. I tuned into Question Time to see my former bosses, people that I had dedicated my life to, downplay my lived experience.”

“I have been crying for weeks because I thought I would never see this day,” said Ward. “It feels like a tidal wave of rage is sweeping the land.”

In Melbourne, demonstrators laid out a 100-foot-long list containing the names of nearly 900 women and children killed by men since 2008.

In the Tasmanian capital of Hobart, Grace Tame—an activist, sexual assault survivor, and 2021 Australian of the Year—told demonstrators that “evil thrives in silence.”

Australian of the Year Grace Tame delivered this empowering speech at the March4Justice in Hobart, joining thousands of women across Australia marching against sexism and gendered violence. pic.twitter.com/hwc6nsznaH

“Behavior unspoken, behavior ignored, is behavior endorsed,” added Tame. “But if one of these barriers to progress is silence… it gives me hope because the start of the solution is also quite simple—making noise!”

The Australian protests came days after the World Health Organization released a report on the largest-ever study of the prevalence of violence against women. According to the report, one in three females worldwide, or around 736 million women, have been subjected to physical or sexual violence, mostly by intimate partners.

In the United States, the National Domestic Violence Hotline is 1-800-799-SAFE (7233) and a live chat service is available at www.thehotline.org. Both offer 24/7, free, and confidential support.

In Australia, if you or someone you know is in immediate danger, dial 000. Click here for a list of national and state crisis line numbers.