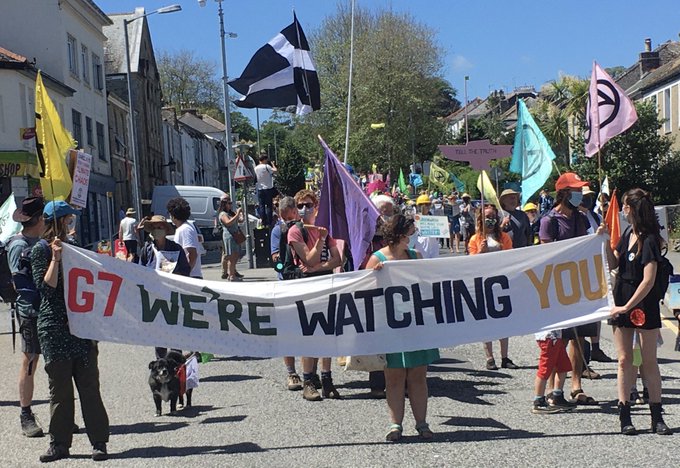 Oxfam calculates that if patent protections were waived by the World Trade Organization (WTO) and vaccine production ramped up worldwide people in low- and middle-income nations could be adequately vaccinated for an estimated cost of $6.5 billion, but that if pharmaceutical companies are allowed to retain their for-profit stranglehold on production and distribution that cost would soar to $80 billion.

“Without a waiver, we would effectively be spending up to 10 times more that we need to in order to get enough doses—much of which will be money that will go directly into the pockets of the shareholders of these companies,” a spokesperson for the global anti-poverty group told The Guardian.

This is not about profit it is about saving lives. Lift barriers to #TRIPSwaiver NOW!
Sign the petition. Demand protection for everyonehttps://t.co/OJAxXQFocK#PeoplesVaccine pic.twitter.com/Q58U1WEGyQ

The assessment come as anti-poverty and public healthy campaigners have issued harsh rebuke to an agreement announced by G7 leaders on Friday, warning a collective pledge to donate at least 1 billion vaccine doses to the developing world should be seen as little more than a giveaway to powerful corporate interests and nowhere near adequate to protect the world’s most vulnerable from the ravages of Covid-19.

“If the best G7 leaders can manage is to donate 1 billion vaccine doses then this summit will have been a failure,” said Oxfam’s health policy manager Anna Marriott in statement on Friday.

With an estimated 11 billion doses needed to end the pandemic, Marriott said the G7 plan—as nice as it might sound to some on paper—is not going to cut it.

“Dose sharing is part of the solution if done immediately,” she said, “but charity is not going to fix the colossal vaccine supply crisis. In order to ramp up production, the G7 should break the pharmaceutical monopolies and insist that the vaccine science and know-how is shared with qualified manufacturers around the world.”

Nick Dearden, executive director of the U.K.-based Global Justice Now—which along with Oxfam is part of an international coalition backing the WTO waiver and calling for a “People’s Vaccine” regiment—said the Carbis Bay Agreement, named for the body of water in Cornwall where the G7 has gathered, exemplifies the failures that have become a hallmark of the world’s powerful during since Covid-19 hit last year.

Big pharma greed is adding over $70 BILLION to the cost of vaccinating the world.

We need to suspend the patents NOW!#PeoplesVaccinehttps://t.co/aj3DQbGKXF

“The lessons from this pandemic are clear; we can’t just hand over publicly funded research to private companies and expect them to deliver vaccines fairly in the public interest,” said Dearden in a communique from Cornwall on Saturday. “But here we have a plan carved out by the same companies who have driven an artificial shortage of Covid-19 vaccines. And the lower income nations who are most impacted have been frozen out the room too.”

Instead of solutions by the G7, said Dearden, “we have a back-room deal by the wealthiest that risks repeating all of the mistakes made so far in this pandemic.”

The international campaign demanding a “People’s Vaccine” that puts public health needs above the profit-seeking interests of pharmaceutical corporations has been adamant since its inception during the pandemic that five things must be done at a global scale in order to end the Covid-19 outbreak resolutely and equitably:

While some leaders at the G7—including U.S. President Joe Biden and more recently President Emmanuel Macron of France—have backed the WTO waiver, many in the G7 continue to stutter and object to such a move.

Oxfam’s Marriott suggested further delay is not only unacceptable—but deadly.

“The lives of millions of people in developing countries,” she said, “should never be dependent on the good will of rich nations and profit hungry pharmaceutical corporations.”