“We are fighting to defend our territory, our rivers, our forest, our fish, and our animals,” one Indigenous leader explained. “Without our forest and without water, we cannot live.” 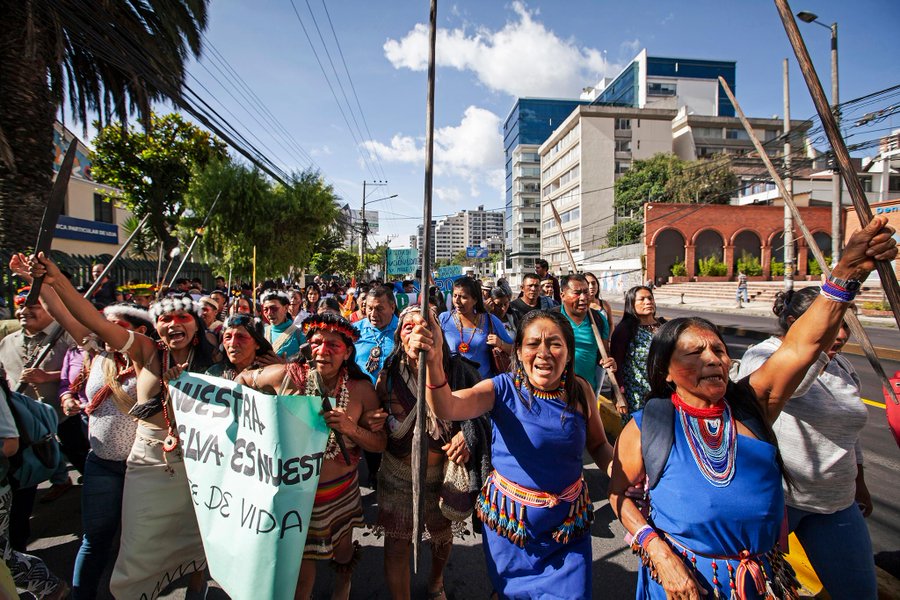 Indigenous Amazon protectors on October 18, 2021 filed the first in a series of lawsuits challenging a pair of decrees by Ecuadorian President Guillermo Lasso in service of expanding the fossil fuel and mining industries. (Photo: Amazon Frontlines/Twitter)

In a bid to halt what one Indigenous leader called a “policy of death,” communities from Ecuador’s Amazon region on Monday sued the country’s right-wing president, who is planning a major expansion of fossil fuel extraction and mining that threatens millions of acres of pristine rainforest and the survival of native peoples.

In the first of a series of lawsuits against President Guillermo Lasso, Indigenous nations, groups, and advocates allege that Executive Decree 95—which aims to double the country’s oil production to one million barrels per day by deregulating the fossil fuel industry—violates their internationally recognized right to free, prior, and informed consultation and consent.

Lasso, a former banker who defeated progressive economist Andrés Arauz in a second-round runoff election in April, has also said he wants to make mining one of Ecuador’s leading income sources.

Monday’s lawsuit will be followed by a second suit against Executive Decree 151, which loosens environmental controls to expedite foreign mining companies’ entry into the Amazon region against the wishes of Indigenous peoples. The plaintiffs are demanding Ecuador’s Constitutional Court strike down both decrees.

“The Ecuadorean government sees in our territory only resource interests,” Waorani of Pastaza (CONCONAWEP) President Nemonte Nenquimo said outside the Quito court, according to Reuters. “Our territory is our decision and we’ll never allow oil or mining companies to enter and destroy our home and kill our culture.”

According to Amazon Watch:

These decrees are a threat to the Amazon, its peoples, and the climate. They pave the way for a massive expansion of extraction in some of the most ecologically fragile and culturally sensitive areas, and if history is any lesson, promise continued rights violations of Indigenous peoples and nature.

Viktor Quenama, president of the A’i Kofan community of Sinangoe, said, “We are fighting to defend our territory, our rivers, our forest, our fish, and our animals. Without our forest and without water, we cannot live.”

“We have made a firm decision to keep our territory free from mining,” he added. “We don’t want the Aguarico River and its tributaries to be exploited and contaminated. Our elders, youth, men, and women are all united in this struggle. We want to care for our territory so that future generations can live well. The Ecuadorian government must respect our rights and let us live freely.”

María Espinosa, an attorney with the advocacy group Amazon Frontlines, said that “we are presenting these lawsuits against Executive Decrees 95 and 151 because we consider that these decrees are in clear violation of Indigenous people’s rights to prior consent and pre-legislative consultation.”

“These decrees seek to accelerate extractive activities such as oil and mining, which generate grave and irreparable impacts against the physical and cultural survival of Indigenous peoples,” she continued. “Through unconsulted administrative procedures and the pretext of economic development, President Guillermo Lasso intends to impose an extractive agenda and sacrifice the lives of thousands of Indigenous families who inhabit these territories.”

Confederation of Indigenous Nationalities of Ecuador (CONAIE) President Leonidas Iza said that the Ecuadorian government seeks “to continue this policy of death.”

“This isn’t a problem of the Indigenous,” asserted Iza, “it’s one of civilization.”