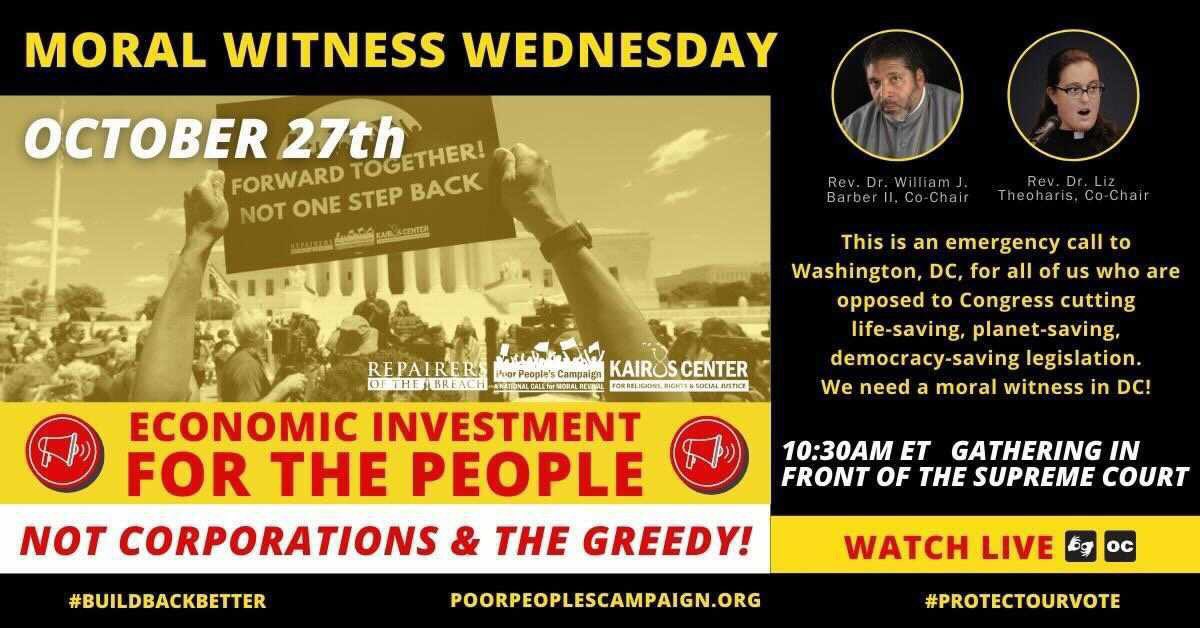 “We need to stop asking, ‘How much does a bold Build Back Better agenda cost?’ and instead ask, ‘How much does it cost not to Build Back Better?'” Rev. Dr. William J. Barber II, president of Repairers of the Breach, said during Wednesday’s rally, which was organized by the Poor Peoples’ Campaign: A National Call for Moral Revival, an effort that he co-chairs.

Wednesday’s event came as more details were emerging about a hollowed-out version of the Build Back Better framework, a legislative package that can be passed through the filibuster-proof budget reconciliation process but only if all 50 Senate Democrats and all but three House Democrats back it.

Due to several months of obstruction from a handful of conservative Democrats—bankrolled by the same corporate interests engaged in an anti-Build Back Better lobbying blitz—the package’s agreed-upon 10-year spending level has been cut in half, from $3.5 trillion to $1.75 trillion. According to the latest reporting, the following items have been removed or watered down as a result, though Public Citizen president Robert Weismann argued Thursday that “it’s not too late to improve” the bill:

Working-class Americans who will be most hurt if Democrats refuse to pass the full $3.5 trillion package explained how the proposed cuts would negatively affect them.

“I want you to hear me really clear when I say this: The relief that the child tax credit has provided me as a single mother—to make an extra $300—has allowed me to meet my basic needs, my son’s basic needs with less stress,” said Kristen Olsen of West Virginia, the home state of right-wing Democratic Sen. Joe Manchin.

The yacht-residing Manchin has been one of the Democratic Party’s biggest obstacles to progress, including attempts to limit the child tax credit. To take away that relief, Olsen said, “is wrong.”

“I’m Kristen. I’m a mother. I’m a teacher,” she added. “And I am the cost of cutting the Build Back Better plan.”

Joan Steede, a home healthcare worker from Phoenix who specializes in caring for hospice patients, said that she is the last person that some people “will see on this Earth, but I can’t get $15 an hour?”

“Let’s put our money into where we want it to go and that’s the American people,” she added.

We’re headed to the Hart building to deliver our message to @SenatorManchin and @SenatorSinema! The people will not allow them to stop our progress! pic.twitter.com/9geh0TanqF

“Essential workers are the backbone of our economy, the beating heart of our communities, and the reason why stakes are so high in this Build Back Better package,” said Lee. “From housing to voting rights to healthcare to immigrant rights, from child poverty to action on climate change, these are all the issues that just can’t wait.”

Multiple speakers addressed what the Poor People’s Campaign called “the lie that the country can’t afford Build Back Better.”

“We’ve said this stuff is absolutely critical,” said Barber. “We’ve said we had the worst attack on voting rights since the end of the Civil War. We say that the climate is in trouble. And we say it’s urgent. But then we treat it as though we’ve got options and more time. And we do not.”

Manchin, for instance, asserted on Monday night that expanding Medicare to include dental, vision, and hearing benefits is “not fiscally responsible.” Only hearing benefits are included in the reconciliation package for now, even though West Virginians suffer more from a lack of dental care than the residents of any other state.

Manchin’s comment from Monday parroted his statement from last month that the nation faces a so-called “brutal fiscal reality” and that spending $3.5 trillion over a decade to meet human needs is “fiscal insanity”—a line of thinking endorsed by Sinema, who has also pushed for drastically slashing social investments while simultaneously being opposed to raising revenue through Medicare drug price negotiation and tax hikes on the rich.

As many progressive critics have pointed out in recent weeks, these ostensible deficit hawks are rejecting an average yearly expenditure of $350 billion on healthcare, green energy, and other vital programs despite having voted for every $700 billion-plus annual Pentagon budget—described by the Security Policy Reform Institute’s Stephen Semler as “a yearly bailout for arms corporations”—since joining Congress.

Remember: the biggest non-election-related lie in American politics is that we can’t afford $350 billion a year on what’s in the Build Back Better plan. It’s a demonstrable lie. We are literally in the midst of passing a new defense budget worth $750 billion a year.

Projected military spending over the next decade is $8.3 trillion, or $4.8 trillion more than the reconciliation bill costs over the same time period: https://t.co/SxXC1YTGDC pic.twitter.com/MP01cxW9S0

“Democrats are putting America on the path to spend $8 trillion on the regular Pentagon budget in the next decade,” tweeted The Daily Poster‘s David Sirota. “The Biden plan released today proposes to spend 1/20th of that amount to fight the climate crisis that threatens all life on the planet.”

The gutted reconciliation bill includes $555 billion in climate funding over 10 years, but thanks to the intransigence of Manchin, a coal profiteer and Congress’ top recipient of oil and gas industry donations, the most powerful provisions to penalize fossil fuel corporations and spur widespread renewable energy development have been abandoned.

During Wednesday’s event, Rabbi Jonah Pesner, director of the Religious Action Center of Reform Judaism, argued that the Build Back Better agenda is not about “the price.”

“It’s about what we are for,” said Pesner. “We are for living wages. We are for healthcare access. We are for the ability of families to take care of their children. And we are for a clean, green economy where people have a shot to actually make it in this world and have a right to live.”

That sentiment was echoed by young climate activists participating in a hunger strike, such as Abby Leedy, who said that “I am furious with the Democrats who will not stand for me, will not fight for my generation and who are going to let us burn and drown… We deserve to live.”

Rev. Dr. Liz Theoharis, co-chair of the Poor People’s Campaign and director of the Kairos Center for Religions, Rights, and Social Justice, said that the goal of the press conference was “to make clear that the people most impacted by compromises made to healthcare and paid sick leave, the child tax credit and earned income tax credit, saving the planet, early childhood education, and veterans benefits will not be silent.”

Our children deserve better. And it won’t happen unless we build it. We have to #BuildBackBetter https://t.co/9GRMi0r02j

As Common Dreams reported earlier on Thursday, Rep. Pramila Jayapal (D-Wash.), chair of the Congressional Progressive Caucus, and other progressive House Democrats including Reps. Ilhan Omar (Minn.), Rashida Tlaib (Mich.), Alexandria Ocasio-Cortez (N.Y.), and Cori Bush (Mo.), have reiterated that they will not vote for the Senate-passed bipartisan physical infrastructure bill without seeing the final legislative text of the Build Back Better Act and without assurances that it will pass the Senate.

Sen. Bernie Sanders (I-Vt.), for his part, has vowed to keep fighting to get vision, dental, and lower drug prices into the reconciliation package.