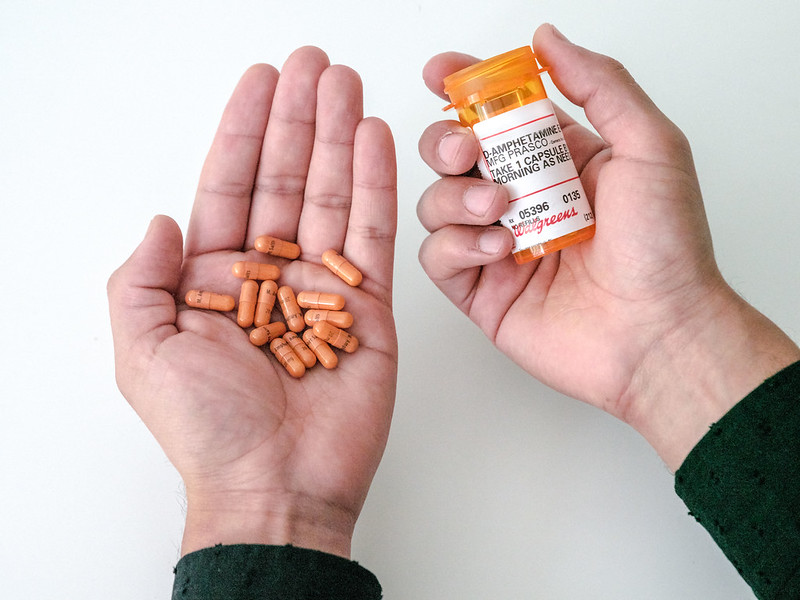 As Common Dreams has reported, pharmaceutical corporations and private health insurers spent $171 million on lobbying through the first nine months of the year, the most of any industry. Big Pharma’s 1,600 lobbyists outnumber members of Congress by a ratio of three to one.

Although the industry lobbies on a variety of issues each year, H.R. 3—which would empower Medicare to directly negotiate medicine prices with pharmaceutical companies and served as the model for the Build Back Better Act’s original plan to lower prescription drug costs—”was the bill most often cited that PhRMA lobbied on,” the Post noted. “It appeared in its reports 35 times so far this year.”

The influence campaign at times worked through groups whose funding sources are hidden. At least 20 different advertisements were run on television and online across the country. The advertisements were augmented by a campaign by PhRMA, which spent nearly $23 million on lobbying through the first nine months of 2021, according to data compiled by OpenSecrets, which tracks corporate spending and political influence. That puts PhRMA on track this year to beat its own spending recording of $29.3 million in 2019.

This is a horrifying #darkmoney story. Pharma boldly spending millions to limit the drug pricing reform that would help regular Americans afford their medicines. We need the #moneyinpoliticsreforms in the #freedomtovoteact https://t.co/ckNcZVxkGj

Last week, in an attempt to appease a few conservative Democratic obstructionists led by Sens. Kyrsten Sinema (Ariz.) and Joe Manchin (W.Va.), President Joe Biden unveiled a heavily gutted Build Back Better framework that slashed the social welfare and climate package’s previously agreed upon 10-year spending level in half, from $3.5 trillion to $1.75 trillion. The bill can be passed through the filibuster-proof budget reconciliation process, but only with the support of all 50 Senate Democrats and all but three House Democrats.

Despite the fact that 83% of U.S. adults want the federal government to reduce the costs of medications, for which Americans pay two to four times more than people in other countries, the provision that would have authorized Medicare to do so was briefly removed due to the intransigence of a handful of right-wing Democrats bankrolled by Big Pharma—including Sen. Bob Menendez (N.J.), Sinema, Manchin, and Reps. Kathleen Rice (N.Y.), Scott Peters (Calif.), and Kurt Schrader (Ore.).

Thanks to the efforts of progressive advocates and lawmakers, including Sens. Bernie Sanders (I-Vt.) and Ron Wyden (D-Ore.) as well as Rep. Susan Wild (D-Pa.) and 14 other House Democrats, however, a compromise was reached. Although the deal does not go as far as many had hoped, it “still delivers reforms that could cut costs for millions of Americans by capping out-of-pocket spending for seniors at $2,000 a year, capping insulin costs, barring price increases from rising faster than inflation, and allowing Medicare to begin negotiating the prices for some drugs,” the Post noted.

Even the limited drug pricing reform remains in jeopardy as of Friday, however, as Rice, Peters, and Schrader are reportedly pushing to increase the duration of market exclusivity for drugs prior to the start of a two-year-long negotiation process—advocating for nine to 12 years, up from seven to 10.

“What we’re trying to do is defying one of the most powerful special-interest lobby groups in Washington, D.C.,” Rep. Andy Kim (D-N.J.) told the Post. “The fact that we were able to get something that will meaningfully help people was important.”

Kim, Rep. Elissa Slotkin (D-Mich.), and other lawmakers who support making lifesaving drugs more affordable were targets of Big Pharma’s offensive, the newspaper explained, as their districts were flooded with misleading mailers, digital ads, and text messages accusing them of pushing a “socialist healthcare plan to control what medicines you can get.”

Research by Patients for Affordable Drugs Now, which advocates for lower prices, found that PhRMA and its allies spent at least $26.5 million on television and digital ads attacking proposals on price negotiations between July and early November. That included $2.7 million spent by PhRMA, but also $4.5 million in ads by the 60 Plus Association, which bills itself as a conservative version of AARP and did not respond to a request for comment.

“The intensity right now of K Street and the deployment of lobbying and dark money is extraordinary,” Nick Penniman, chief executive of Issue One, which advocates for transparency in Washington, told the Post. “It is a frenzied state right now.”

Brian Newell, a spokesperson for PhRMA, the pharmaceutical industry’s chief lobbying arm, said in a statement that “our advocacy has focused on delivering solutions that will lower what patients pay out of pocket for prescription medicines, while opposing reforms that would ultimately… restrict access to lifesaving medicines.”

Recent research, however, shows that prescription drug costs have been soaring, with list prices increasing by 159% from 2007 to 2018. Last year, West Health Policy Center warned that if these trends continue, cost-related nonadherence to drug therapy—skipping doses to save money—will be “a leading cause of death in the U.S., ahead of diabetes, influenza, pneumonia, and kidney disease.”

According to the Council for Informed Drug Spending Analysis (CIDSA), allowing Medicare to directly negotiate drug prices with pharmaceutical corporations could prevent nearly 94,000 deaths per year while also reducing Medicare spending by almost $476 billion by 2030.

Gilbert, for her part, called on congressional Democrats to pass the Freedom to Vote Act, which includes reforms to limit the power of money in politics.

Last month, Senate Republicans deployed the 60-vote filibuster rule to block debate on the legislation, which is a compromise bill crafted after the GOP filibustered the more far-reaching For the People Act twice.

While there is a consensus among progressives that U.S. democracy is in grave danger, available legislative remedies cannot pass until Senate Democrats repeal the filibuster.