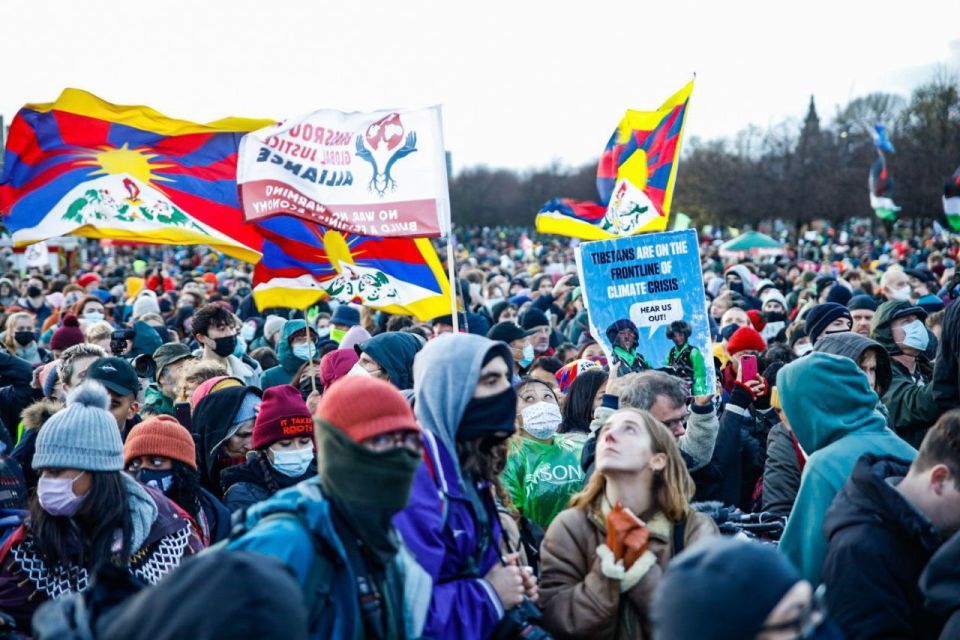 “Many thousands of people took to the streets today on every continent demanding that governments move from climate inaction to climate justice,” Asad Rehman, a spokesperson for the COP26 Coalition, said in a statement. “We won’t tolerate warm words and long-term targets anymore, we want action now.”

Activists from all over the globe are mobilising to demand a future that works for all of us.

We reject false solutions. We reject empty promises. We demand system change and we demand it now. ✊ #UprootTheSystem #COP26GDA pic.twitter.com/8sqJcSOxUi

“Today, the people who have been locked out of this climate summit had their voices heard,” Rehman continued, “and those voices will be ringing in the ears of world leaders as we enter the second week of negotiations.”

#Climatejustice is Indigenous sovereignty. Today, thousands marched through the streets of #glasgow on the 6th day of the #unclimatetalks for the global day of action for climate justice. pic.twitter.com/HmwsRw49cs

Rehman added that “the climate crisis has resulted from our broken, unequal societies and economies. We must transform our global economies into ones that protect both people and our planet instead of profit for a few.”

Today, 100,000 activists marched to Glasgow Green to rally for #climatejustice and the system change necessary to achieve this.

The COP26 Coalition is a United Kingdom-based alliance of civil society groups and trade unions mobilizing around climate justice during the ongoing United Nations climate summit in Scotland. That’s where governments “will decide who is to be sacrificed, who will escape, and who will make a profit,” the coalition said. “We can either intensify the crisis to the point of no return, or lay the foundations for a just world where everyone’s needs are met.”

Saturday’s actions in every corner of the globe came one day before the start of the People’s Summit for Climate Justice, where ordinary individuals can “discuss, learn, and strategize for system change.” From Sunday through Wednesday, participants can attend workshops in Glasgow or join online events.

Sharing scenes of the #Cop26GDA from across the world, and featuring #ClimateJustice organisers and leaders including: @NaomiAKlein, @vanessa_vash, @IlhanMN & many more! Watch live 👇https://t.co/sIvWo6gzDS

The coalition’s call to action emphasizes that those who have done the least to cause public health crises, including the fossil fuel-driven climate emergency and the deforestation-linked Covid-19 pandemic, “suffer the most.”

“Across the world, the poorest people and communities of color are too often those bearing the brunt of the climate crisis,” the coalition continued. “From coastal villages in Norfolk whose sea-defenses are eroding faster than ever, to people living by the Niger Delta rivers blackened by oil spillage.”

Global crises of economic exploitation, racial oppression, and environmental degradation “not only overlap,” the coalition added, “but share the same cause.”

“We got to this crisis point,” the coalition said, “because our political and economic system is built on inequality and injustice. For centuries, rich governments and corporations have been exploiting people and the planet for profit, no matter how much it harms the rest of us.”

The solution, said the coalition, is “system change that comes from the ground up.” Remedies that “not only reduce carbon emissions but create a fairer and more just world in the process… already exist and are being practiced, but our leaders lack the political will” to pursue “climate action based on justice, redistribution of resources, and decentralization of power.”

“Justice won’t be handed to us by world leaders or delivered by corporations,” the coalition added. “Only we can imagine and build the future that works for all of us… through collective action, solidarity, and coordination” in local communities and at the international level.

That message was echoed by COP26 Coalition member War on Want, a U.K.-based organization that fights the causes of poverty and defends human rights.

In a video arguing that the dominant political-economic order is not broken, but rather “rigged,” War on Want explains how the capitalist system “generates increasing wealth for the already rich and powerful at the expense of the majority of people on this Earth” and advocates for a Global Green New Deal to achieve climate justice.

“Billionaires, corporations, and oligarchs don’t measure failure in lives lost, houses flooded, communities destroyed, forests burned, or people locked into poverty,” the video continues. “They measure success by their bank balance, by share prices, and by holidays in space.”

“Where we see climate breakdown, poverty, and injustice, they see nothing but profit,” states the video. “The climate crisis is a crisis of justice.”

Echoing recent research highlighting the extent to which the Global North extracts resources from the Global South, War on Want notes that “from the shackles of slavery to the gunboats of colonialism, from imperialist interventions to the neoliberal rigging of the global economy,” wealthy countries, and especially the elites within them, have drained trillions of dollars from impoverished nations, and that is reflected in their disproportionate share of global greenhouse gas emissions.

The U.K., the United States, and the European Union, for instance, have been responsible for nearly half of the world’s carbon pollution, despite making up just 10% of its population.

Meanwhile, a new study shows that the world’s wealthiest countries and worst polluters are spending over twice as much on border militarization to exclude growing numbers of refugees as they are on decarbonization.

Despite repeated warnings that limiting global warming to 1.5°C above preindustrial levels by the end of the century requires keeping fossil fuels in the ground and ramping up the worldwide production of clean energy, U.S. President Joe Biden has been approving extraction on public lands and waters at a dangerous clip, and he and the CEO of Royal Dutch Shell have both pushed for boosting the supply of oil.

Globally, fossil fuel use is projected to increase this decade even as annual reductions in coal, oil, and gas production are necessary to avert the worst consequences of the climate crisis.

The planet is currently on pace for a “catastrophic” 2.7°C of heating this century if countries—starting with the rich polluters most responsible for exacerbating extreme weather—fail to rapidly and drastically slash greenhouse gas emissions, accelerate the transition to renewable energy, and enact transformative changes.

Like Bolivian President Luis Arce, the COP26 Coalition stressed that “the multiple crises we face are not going to be solved with more exploitation of people and the planet, and cooking the books.”

“Current government and corporation targets of ‘Net Zero’ do not mean zero emissions,” the coalition explained. “Instead, they want to continue polluting while covering it up with crafty ‘carbon offsets.’ We need commitments and action to achieve Real Zero. That also means no new fossil fuel investments and infrastructure at home or abroad, and saying no to carbon markets, and banking on risky unproven technologies that allow countries and corporations to continue polluting.”

In addition, the coalition said, “climate action must be based on who has historically profited and those who have suffered.”

Each country’s carbon emission reduction must be proportional to their fair share: how much they have contributed to the climate crisis through past emissions. We must cancel debts of Global South by all creditors and the rich countries must provide adequate grant-based climate finance for those on the frontline of the climate crisis to survive. We must address the loss of lives, livelihoods, and ecosystems already occurring across the world, through a collective commitment to providing reparations for the loss and damage in the Global South.

In its video, War on Want stresses that “poverty, the climate crisis, inequality, and racism aren’t accidental. They’re political.”

“The answer is people power,” the group adds. “All across the world—from peasants sowing solidarity, workers fighting for a living wage, people resisting occupation, Indigenous communities defending communal lands, to climate activists taking to the streets—we are all coming together to challenge the system, uproot injustice, and fight for people and our planet.”

Speaking at Saturday’s rally in Glasgow, Kathy Jetnil-Kijiner, Marshall Islands Climate Envoy to the United Nations, said that “we need the biggest emitters to be held responsible. We need financing to implement the solutions we are currently developing ourselves through our national adaptation plan.”

“We contribute 0.00005% of the world’s global emissions,” Jetnil-Kijiner added. “We did nothing to contribute to this crisis, and we should not have to pay the consequences. We need to keep up the pressure [so] that COP26 doesn’t allow offsets or endanger human rights and the rights of Indigenous people.”