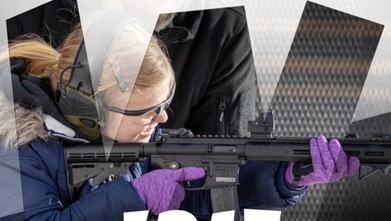 Although it is under 2.5 pounds and 20% smaller than the standard version, the JR-15 “operates just like Mom and Dad’s gun,” WEE1 Tactical said in a statement. The weapon “functions like a modern sporting rifle,” but its “lightweight and rugged polymer construction and ergonomics are geared towards children.”

WEE1 Tactical launched the JR-15 earlier this month at an annual trade show sponsored by the National Shooting Sports Foundation, which is based in Newtown, Connecticut—where a gunman with an AR-15 murdered 26 people at Sandy Hook Elementary School in 2012.

“The callousness of the National Shooting Sports Foundation to promote a children’s version of the same type of assault rifle that was used in a horrific mass shooting of 20 first graders and six educators in our shared community is just the latest proof that the organization, and the gun manufacturers it represents, will do anything in pursuit of continued profits,” Po Murray, chairwoman of the Newtown Action Alliance, said Wednesday.

Other critics of the new rifle took aim at the gun-maker, which is also selling “swag” featuring cartoon skulls with baby pacifiers—one with bows and pigtails, and another with a mohawk.

As Josh Sugarmann, executive director of the Violence Policy Center (VPC), put it: “At first glance, this comes across as a grotesque joke. On second look, it’s just grotesque.”

“That a gun-maker has embraced imagery of dead children to promote gun ownership by youth surreally illustrates how detached this industry is from the death and injury that result from its products, especially among the young,” he added.

Sugarmann authored VPC’s 2016 report entitled “Start Them Young”: How the Firearms Industry and Gun Lobby Are Targeting Your Children. He likened the gun lobby’s efforts targeting young people to those of Big Tobacco:

The tragic frequency of shootings involving children and teenagers is well documented and unfortunately now a regular part of our daily existence. Yet few realize that the firearms industry and the organizations that represent their interests, including the National Rifle Association, have made it one of their top marketing priorities to promote the use of guns among America’s children, as young as grade-school age. In doing so, the gun industry is following a trail once blazed by the tobacco industry in its efforts to entice children to smoke cigarettes.

The report concludes that “while the firearms industry and gun lobby consistently work to present this marketing effort in terms of tradition and family, the real impetus lies in profit and political power. Most tragically, the effects of this campaign are all too often measured in unnecessary death and crippling injury.”

In line with such marketing tactics, WEE1 Tactical said in its statement that “the JR-15 is the first in a line of shooting platforms that will safely help adults introduce children to the shooting sports.”

Kathleen Sances, president and CEO of One Aim Illinois, expressed concern about what lies ahead as adults purchase the weapon for children.

“The marketing of children’s assault rifles by an Illinois company not only brings shame to our state,” she said, “but can only increase the threat of gun death and injury to children here and across the nation.”