Government funding cuts to key pandemic programs forced by GOP opposition arrive as progressives in Congress renew their push for Medicare for All. 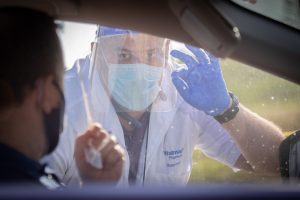 A major testing company in the United States announced this week that it will now charge people without Medicare, private coverage, or other insurance a $125 out-of-pocket charge to receive a Covid-19 PCR test—a fresh example of how the U.S. remains an outlier among wealthy nations for refusing to provide universal healthcare for its people.

According to ABC News, Quest Diagnostics, one of the largest testing companies in the country, has decided that those “who are not on Medicare, Medicaid or a private health plan will now be charged $125 dollars ($119 and a $6 physician fee) when using one of its QuestDirect PCR tests either by ordering a kit online or visiting one of the 1,500 Quest or major retail locations that administer the tests, such as Walmart or Giant Eagle.”

The outlet reports the company has already “begun notifying its clients and partners they can no longer expect to be reimbursed for uninsured claims” unless new government funding is approved by Congress.

As Common Dreams reported at the time, critics slammed lawmakers earlier this month for making a “choice to extend the pandemic” by dropping over $15 billion in Covid-19 relief from a must-pass omnibus spending bill after Republicans wanted the funds to be redirected from already approved aid directed toward states.

Citing research published last month in the Journal of General Internal Medicine, physician and Medicare for All advocate Dr. Adam Gaffney on Saturday posted a twitter thread detailing how the study showed that uninsured people in the U.S. were more likely to be infected with Covid-19, a statistic he believes is likely still true, but much less likely to get tested.

“Even with the federal coverage,” Gaffney said, the study he co-authored on the subject “found uninsured were less likely to be tested, despite having a higher rate of test positivity. But this latest shift will only exacerbate such disparities.”

And while the researchers concluded their study by calling for expanded and more robust insurance coverage and access to Covid care for Americans, Gaffney bemoaned Saturday that now policymakers are “going in reverse.”

Responding to ABC News reporting on Saturday, Oni Blackstock, a medical doctor and founder of the group Health Justice, suggested Quest’s shift on how it will charge for their testing was an ominous sign:

This is not going to end well.

“Quest Diagnostics, one of the largest testing companies in the country, told ABC News that patients who are not on Medicare, Medicaid or a private health plan will now be charged $125 when using one of its…PCR tests.” https://t.co/A4C4dnX05H

Eric Reinhart, an athropology researcher and a resident physician at Northwestern University, also condemned the development.

A national disgrace that will surely exacerbate the death toll when the next wave hits. https://t.co/AU9mbqSUUj

The news also comes as progressives in the U.S. House on Thursday announced the first hearings since the pandemic began on Medicare for All.

Rep. Cori Bush (D-Mo.), who along with Committee Chair Carolyn Maloney (D-N.Y.) will lead the hearing in the House Oversight Committee on Tuesday, said this week that “Americans deserve a healthcare system that guarantees health and medical services to all. Congress must implement a system that prioritizes people over profits, humanity over greed, and compassion over exploitation.”