Yoon Suk-yeol was swept to victory on a wave of ‘anti-feminism’ among young Korean men. Now, he wants to abolish the Ministry of Gender Equality 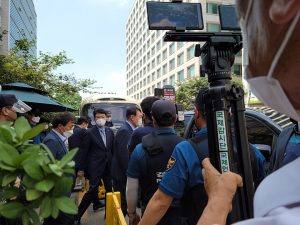 “I threw up and cried.” This was 30-year-old Haein Shim’s reaction to the results of South Korea’s presidential election, held on 9 March. As the senior director of foreign media of Seoul-based feminist group Haeil (translated as ‘Tsunami’), Haein had felt neither candidate was necessarily a strong or progressive choice. But ultimately it was Yoon Suk-yeol of the People Power Party – in Haein’s eyes, the worse of two evils – who won.

“We have to choose the head of the state, but there is no candidate for women to choose from,” says Haein, who originally hails from Gwangju in south-west South Korea and now lives in the US. “No candidate sees women as they really are.”

Yoon Suk-yeol, South Korea’s incoming president, is a controversial figure. He ran on a platform of promising to tackle class inequality and get tough on China, while aligning more with the US. But central to his campaign were pledges to address the grievances of young Korean men who consider themselves anti-feminists, including abolishing the Ministry of Gender Equality and Family.

Suk-yeol’s opponent, Lee Jae-myung of the previously ruling Democratic Party, didn’t instill much hope either; in recent years, the party has seen a slew of sexual harassment scandals. But it was Suk-yeol’s active misogyny that won him the day, carried to victory on the backs of male voters in their 20s and 30s. Despite the new reality of an incoming president who doesn’t believe gender-based structural discrimination exists in South Korea, the country’s feminist movement is determined to fight back.

A worsening situation for women

Their struggle does not come without risk, however, and on multiple fronts.

While the likes of economic discrimination and sexual harrassment dogs women in the country, rising anti-feminst sentiment means their physical safety and security is also constantly threatened. Yujin, a feminist who has protested before with Haeil, recalls how in 2019, she was followed by “one or two incel men” on her way to a protest. Women attending protests are often are forced to wear masks, sunglasses and caps to conceal their identity and evade surveillance.

Unfortunately, the retaliation against feminist movements has only increased. In August 2021, at a Haeil demonstration that Yujin attended, the president of the New Men’s Solidarity Movement, a misogynistic website with 360,000 subscribers, mobilised his followers to harass protesters. According to Yujin, women were filmed without permission, accosted with murder threats and chased with water guns that they feared may have been loaded with diluted semen because of previous such attacks.

“There have been men who have been following women’s demonstrations and acting threateningly since then, this was the first time that they have made money by following them in groups and broadcasting them in real-time,” says Yujin.

For Suk-yeol, women were an easy scapegoat. According to Kim Ju-hee, the founder of Haeil: “Korea is a country with a long history of male supremacy that favours boys and aborts a large number of girls,” which, she says, has naturally spurred a “brutal patriarchy”. But misogyny perpetrated by young South Korean men today seems to diverge from the “traditional” sexism that emphasised stereotypical gender roles.

In their 2019 book ‘Men in 20s’, journalist Gwan-yul Cheon and data scientist Han-wool Jeong argued that young men in South Korea had rejected “the male privilege and the duty that typically comes with the patriarchal form of sexism”, such as gender roles and masochism. Instead, sexism is expressed via ‘anti-feminism’, an ideology based upon the belief that feminism is misandry.

This difference can be perhaps partially attributed to how social media networks shape South Korean society. In South Korea, 87% of the population uses some form of social media, which is 80% higher than the global average of 49%. Misogynistic grievances have festered online and led to the creation of vehement anti-feminist groups. A 2018 report by Ma Kyung-hee, a gender policy researcher at the Korean Women’s Development Institute, surveyed 3,000 men and found that the older generations thought women needed to be protected, while young men see women as “competitor[s] to overcome” who have unfair advantages.

Contributing to this emerging perspective is the consensus among young South Korean men against conscription. Men between 18 and 25 are required to serve in the military for 21 to 24 months, a law that women are exempt from. In Kyung-hee’s 2018 poll, 72% of the men surveyed thought that the male-only draft was a form of gender-based discrimination. Not only do men feel they’re losing two years of freedom, they feel women can pursue opportunities while they are serving. Policies intended to tackle the gender wage gap, like incentivising the private sector to hire more women, also make young Korean men, who have a higher unemployment rate than other age and gender groups, feel they are being discriminated against. Korea’s nationwide unemployment rate is 3.8% – for men in their twenties it is 9.9%.

Young men also feel like they lose out when it comes to the housing market. “Employment instability has increased due to the increase in non-regular workers, and housing instability is aggravating as real estate prices skyrocketed,” says Ju-hee, founder of Haeil. Housing prices are high; the average price for an apartment in Seoul is $670,000, while median income is just under $2,000 per month.

But rage at these social inequalities has been misdirected. “The youth’s anxiety and anger were directed not at the vested interests and power that caused problems, but at the socially underprivileged, that is, women,” Ju-hee explains. Despite the prevailing misogynistic attitudes, a 2017 report found that women in Korea earn only 63% of what men earn – the highest gender pay gap of all OECD countries.

Women, and especially feminists, are what anti-feminists diagnose as the root cause of Korea’s ails. “Even asking for women’s right to freely decide their appearance outside of the traditional image of women in the patriarchal system is considered a reaction against men,” says Ju-hee. “The reality is that they call it male hatred, not feminism.”

Rather than being a point of defeat, Yoon’s win is mobilising feminists. “We have no choice but to be unrealistic to some extent,” says Jooyoung, a feminist activist who preferred not to give her age or location. Danwoo Yun, an arts journalist and feminist activist, says she “didn’t feel the despair of Yoon Suk-yeol’s election for a long time”, having been motivated by feminists who protested during the election and after his victory. “I’ve regained my will to fight against anti-feminism. I’m ready to fight again,” she says, firmly.

The premier anti-feminist facet of Suk-yeol’s agenda is his promise to abolish the government’s dedicated equalities unit, which was created in 2001 to improve gendered disparities and family welfare. Suk-yeol says the ministry treats men like “potential sex criminals” and wants to introduce tougher restrictions for false claims of sexual assault. This will make it even more difficult for women to seek help, says Ju-hee, as “victims of sexual assault are already attacked and criticised”. Kyung-hee’s 2018 poll found that 55% of men do not support the #MeToo movement.

While Yujin has attended protests before, she is about to run her first one, to oppose the abolition of the Ministry of Gender, which she has organised via social media. She’s also collecting signatures for a petition to ensure the ministry’s survival.

Haeil, too, has joined the fight to preserve the ministry, organising with other grassroots feminist groups such as Women United by Courage and People Against the Pledge to Eliminate the Ministry of Gender Equality and Family. According to Haein Shim, protecting the existence of the ministry – which, in 2017, rolled out a five-year plan to increase the number of women in governments and public schools – is an important symbolic battle in the fight for women’s rights. Fighting for its survival will ensure help to “make change in the system”, says Haein.

“A lot of males, particularly those in their 20s and 30s, believe that abolishing the Ministry of Gender Equality and Family will bring about the end of feminism in Korea,” says Haein. “However,” she explains, “if this happens, it will usher in a new stronger era of feminism in Korea.”