“The real crime,” said one critic, “is giving this money to cops instead of using it for air cleaning to protect the American people from the airborne plague that has killed more than a million of us.” 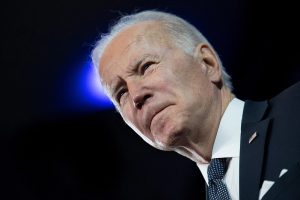 NBC News first reported that the president is expected to make his reallocation request on Friday during a White House event with mayors and law enforcement officials. The meeting is scheduled to take place just one day after Politico reported that the Biden administration is preparing to ration vaccines as Senate Republicans continue to stonewall a multibillion-dollar Covid-19 aid package.

Biden administration officials warned last week that a coronavirus wave this fall and winter could infect up to 100 million people nationwide. The ongoing pandemic has already led to more than one million deaths in the U.S. and 15 million globally.

Biden’s request to shift untapped funds previously authorized to improve public health toward notoriously violent police departments is “incredibly bleak and symptomatic,” tweeted journalist Sam Alder-Bell. “Money allocated to care for humans will be used to cage and kill them instead.”

Thank you @POTUS, @WHCOS, @JakeSullivan46 @AmbassadorRice for this absolute bullshit as the country is in another #COVID19 surge. This is reprehensible. And of course, you think it’s smart politics, but it’s garbage. https://t.co/7I6IBPEYH4

Texas journalist Andrea Grimes lamented that the leader of the Democratic Party is responding to mass death not by demanding transformative policies such as Medicare for All and stronger labor protections but rather by giving additional resources to cops who have shot and killed more than 5,000 people in the U.S. since 2015, including at least 1,050 in the past year alone.

a million people in the US are dead of covid and the democrats are like but what if we got the cops to kill *even more* of you
https://t.co/njWVh0E8TP

Police kill civilians in the U.S. at a far higher rate than their counterparts in comparable countries. People in the U.S. have also died from Covid-19 at a significantly higher rate than people in other wealthy nations—with poor counties suffering twice as many deaths as rich ones. Both public health crises, progressives argue, are indictments of America’s profoundly unequal socio-economic order, which lacks lifesaving rights like universal healthcare, paid sick leave, and other benefits enjoyed in countries with higher levels of union density.

Noting that “a number of major cities have reported surges in crime rates since the start of the coronavirus pandemic,” NBC News reported that “the White House said it is pushing local governments to spend the money before the summer months, when there has historically been more violent crime compared to winter months.”

But given that the American Rescue Plan already provided cities with billions of dollars to prevent police spending cuts due to coronavirus-induced budget shortfalls, and with confirmed Covid-19 cases climbing nationwide, public health experts and advocates implored local jurisdictions to spend money in ways that will help defeat the ongoing pandemic.

“The U.S. should instead use unspent funds to upgrade ventilation in schools and other public settings,” said Anne Sosin, a policy fellow at Dartmouth University. “Investments in indoor air quality now will have benefits far beyond Covid.”

That message was echoed by Matthew Cortland, a lawyer and senior fellow at Data for Progress.

Why not tell states + cities to spend that money upgrading HVAC systems & deploying HEPA filters to pull SARS-CoV-2 out of the air – so that fewer people get sick?

“Are you going to have cops shoot the virus?” Cortland asked sarcastically. “The virus has killed far more Americans than violent crime has.”

“The real crime,” Cortland added, “is giving this money to cops instead of using it for air cleaning to protect the American people from the airborne plague that has killed more than a million of us.”

If the money isn’t going to be spent on improving indoor air quality, progressive economists have urged states and cities to use unspent Covid-19 relief funds to give the education workforce a raise to combat growing staffing shortages in public schools.