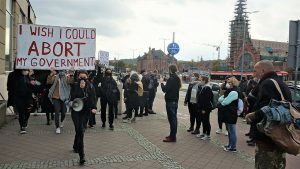 Poland has had restrictive laws in place since 1993, with abortion only legally available in cases of rape and incest, threat to the mother’s life, or severe foetal abnormality. After an unsuccessful attempt to further restrict abortion in the Polish Sejm (the lower house of the country’s parliament) in October 2016, a law banning the abortion of non-viable foetuses finally came into force on 22 October 2020. It was imposed by the Constitutional Tribunal, an institution whose independence and legality is itself in question. The new law means that women are now forced to carry their pregnancy to term and give birth to a dead foetus.

The first attempt to introduce further restrictions to abortion in 2016 triggered a widespread mass mobilisation of women, which became the Polish Women’s Strike. The second, in 2020, triggered demonstrations of enormous proportions. In the whole history of Poland – including the Solidarność era – the authorities had never faced such a degree of mass opposition. Even some 27% of supporters of the populist, right-wing Law and Justice Party (PiS) opposed the new law.

Publication of the decision was delayed for several months, presumably because the authorities were afraid of people’s anger. At one point the government even considered using the army against protesting women and youth.

But did we achieve anything? We didn’t manage to block the decision, but we did manage to revolutionise society: in 2016, fewer than 40% of Polish people were in favour of legal abortion; today it’s almost 70%.

In ‘Catholic’ Poland, the public is against restrictions to abortion, and yet the opposite has become law. Similarly, in the US, a majority is in favour of abortion rights, so the draft of the Supreme Court opinion in favour of overturning Roe v Wade does not represent the views of the people.

But many of those dedicated to the anti-abortion cause are not concerned with the majority view. Take the manifesto of a small and secretive Christian extremist group called Agenda Europe (which also has members from the USA and… Russia), which reads: “Genuine moral precepts are not based on subjective ‘values’ but on objective truth, and this is why it is not only legitimate, but also necessary, to impose them on those who do not accept them.”

The pan-European make-up of this group brings us to the heart of the matter. Feminism has always been considered as a political issue, but today it’s become a geopolitical issue. In the course of research for my book ‘This is War’ (published in Poland in 2020), I came across information that frames the issue of women’s rights in a different light and shows how inseparable these rights are from today’s international politics.

In Poland’s case, the Russian Institute for Strategic Studies (RISS) has been accused of interfering in women’s and LGBTIQ rights and anti-Ukrainian actions.

Known for its pro-government, anti-Western stance, RISS has also been accused of being responsible for the idea of interfering in the 2016 US election.

The Kremlin is waging a war against the West on many fronts, and supporting ultra-conservative demands – no abortion and no equal treatment for LGBTIQ people – is a strategic element of it. Russia is seeking to co-opt so-called ‘culture wars’ within countries into its own, overarching, anti-Western war. A war in which Ukrainians are now dying, but also one in which women are the victims: three women have died in Poland since the 2020 law came into force, due to infections from dead foetuses that hospitals had refused to remove.

I remember how we at the Women’s Strike watched the Women’s March in Washington, held just after Donald Trump’s election, knowing that its organisers would soon dive into the same depression that we did. And when I look at what’s happening in the Supreme Court now, I am almost sure that no mass movement could change the situation because those conservative justices are more passionate about making references to the Middle Ages than our life in the 21st century. Because they simply don’t give a damn about us. And our potential deaths are mere collateral damage built into their belief in their moral superiority.

When I look at the situation in the US now, it seems to me that as a women’s movement, in addition to protesting, we need to take another step that is unusual for us. We need to look geopolitically. But first, we need to become investigators for our own cause. We need to prove to those who talk about ‘traditional values’ that they are backed by discreet but powerful forces, whose intent is to foment discord.

We need to look at these ‘activists’, examine their connections and cash flows, and expose each ‘pro-life’ organisation. First, we need to weed out those with ties to the Kremlin, through which Russia is pursuing its imperial goals, and regain our ‘sovereignty’ – to use a term much abused by the Right nowadays. Sovereignty in deciding what reproductive life should look like in our countries.

And then I dream that our authorities will have the courage to do what Ukraine’s President Zelenskyi did – outlaw such organisations as agents acting to the detriment of society.

Let’s be realistic and demand the impossible – we have the right to do it, since our bodies have become a battlefield.