“Even brief disruptions in access to food can have lasting consequences,” wrote the authors of a new analysis of worsening hunger among U.S. families. 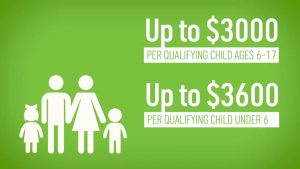 A new analysis out Friday confirms that the number of U.S. households with kids that report not having enough food to eat has surged in the months since corporate Democratic Sen. Joe Manchin of West Virginia joined Senate Republicans in refusing to extend the expanded Child Tax Credit benefit beyond mid-December.

Data from the Household Pulse Survey (HPS), a nationally representative internet survey conducted by the U.S. Census Bureau, shows that from April 27 to May 9, 15% of households with children reported food insufficiency—defined as sometimes or often not having enough food to eat in the past week. In early August, the percentage of families with kids that reported struggling with hunger was roughly 9.5%.

Food has become more expensive in recent months as a handful of corporate grocery giants and meat, egg, and dairy conglomerates have raised prices while cutting frontline worker pay and raking in record profits amid the ongoing Covid-19 pandemic. But Manchin and the GOP’s decision to allow the enhanced CTC benefit to expire at the end of last year is making it even harder for millions of families to make ends meet.

Right-wing lawmakers let the enlarged CTC lapse despite ample evidence that the popular measure improved the lives of children nationwide. In January, the first month since July 2021 that eligible families didn’t receive a monthly payment of up to $300 per child, 3.7 million kids were thrown into poverty.

“While HPS data are not directly comparable to data collected prior to the pandemic,” Raifman and Bovell-Ammon noted, “rates of food insufficiency in March–April 2022 were about three to four times pre-pandemic levels.”

“Food insufficiency among families with children poses a short- and long-term moral and economic threat to the United States,” they wrote. “Even brief disruptions in access to food can have lasting consequences.”

The pair continued: “Not having enough to eat often disrupts children’s cognitive and emotional development and education. This was the case for a child who disclosed that the reason she was fidgeting and not paying attention in class was that she did not have enough food to eat. There may be lifelong ramifications of not having enough to eat in childhood, including increased likelihood of poor health outcomes and avoidable medical expenditures across the lifespan.”

Despite Manchin’s baseless and dehumanizing claim that parents would use federal cash to buy drugs, Raifman and Bovell-Ammon pointed out that several analyses “indicate families with low incomes overwhelmingly used advance CTC payments on basic needs for children, including food, rent, utilities, clothing, and educational costs. There is also no evidence suggesting a reduction in employment among parents in families receiving CTC payments.”

It’s not too late, Raifman and Bovell-Ammon stressed, for Manchin and the GOP to change course.

“As Congress turns its attention to the next reconciliation package, there is an opportunity to reinstate the expanded CTC monthly payments,” the pair wrote. “Amidst continued inflation, rising food insufficiency in households with children, and the Covid-19 pandemic continuing to affect work, health, and the economy, continuation of the advance CTC payments could help children avoid food insufficiency, with immediate and lifelong personal and societal benefits.”

“The most recent wave of HPS data,” Raifman and Bovell-Ammon noted, “show that food insufficiency is concentrated in the lowest-income households with children.”

“Implementing an expanded CTC without exclusions due to work or immigration status will best reach children in families with the greatest need, to the benefit of all children and society,” they added. “While some policymakers have considered work requirements to receive CTC benefits, such requirements carry an administrative burden for states and families that often prevents those who most need benefits from receiving them and results in negative outcomes.”