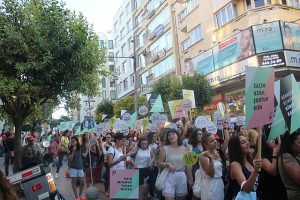 I have been studying how the Turkish leadership under President Recep Tayyip Erdoğan strategically uses women’s organisations that it funds and controls – so-called ‘women-GONGOs’ – in order to mimic and undermine feminist groups. My qualitative research is based on interviews and meetings with more than 20 feminist women’s organisations across Turkey and explores their experiences of the country’s changing civic space.

GONGOs (government-sponsored non-governmental organisations) are an increasingly common phenomenon, especially in authoritarian and hybrid regimes, blurring the lines between state-controlled entities and civil society. These regimes instrumentalise women’s rights for their own purposes, and women-GONGOs are one of the main mechanisms they use to secure internal and external legitimacy and control.

My research also reveals that the main purpose of the establishment of women-GONGOs in Turkey is to strengthen conservative, anti-feminist, Islamic interests and discourses in civil society and to legitimise patriarchal understandings of women’s roles.

In contrast, independent feminist voices in Turkey have been largely forced to reposition themselves as ‘outsiders’ with limited or lost political access and influence. As a result, their ability to advocate, mobilise and advance gender equality has been severely restricted.

The women-GONGOs have also taken over most public funding sources, which were previously available to different civil society organisations, including feminist groups. Some say it has become more difficult for feminist women’s organisations to acquire sustainable domestic funding for projects because “all government resources go to the women-GONGOs in their shiny offices.”

Others find reliance on international donors increasingly challenging because of the “chilling effect” of Turkey’s new terrorism financing law. However, international funding – as well as local government money (from opposition-led municipalities) – are often the only resources left available for feminist mobilisation in Turkey.

From ‘gender equality’ to ‘gender justice’

Under Erdoğan’s rule (as prime minister from 2003 and president from 2014), Turkey has been waging a war against feminist voices and gender equality.

In the early 2000s, there was an initial phase of cooperation between his newly elected Justice and Development Party (AKP) government and feminist women’s organisations. But Turkey’s subsequent move towards authoritarianism has significantly reshaped the opportunities – or limitations – for feminist organising and influence.

Since 2013, the establishment and existence of conservative women-GONGOs, such as KADEM and the Hazar Association, has transformed the landscape of women’s organisations in the country.

KADEM (Women and Democracy Association, Kadın ve Demokrasi Derneği) – whose deputy chair is the president’s daughter, Sümeyye Erdoğan – is the prime example. Founded in 2013, it claims to be a “non-governmental and non-profit organisation working for the empowerment of women […] to ensure gender justice and women’s rights within the family and community.”

This discourse of “gender justice”, promoted by KADEM and other prominent women-GONGOs, clearly opposes and rejects gender equality. The family as an institution is centralised, while the idea of equality between men and women is rejected, with reference to “unchangeable natural differences between men and women,” according to Islam.

On the surface, these groups may appear to be advocating for women’s empowerment, but their values and activities, such as KADEM’s International Women and Justice Summit or its Journal of Women’s Studies, mainly approach women’s issues via the notion of the family.

While civic space and political influence have been expanding for women-GONGOs in Turkey, independent feminist organisations are increasingly perceived as a “feminist threat”.

In recent years, feminist groups have had to change their mobilisation and advocacy strategies, shifting focus to less politically sensitive topics concerning the situation of women. In other words, to be less openly feminist and to present themselves as a civil society organisation rather than as a feminist one, because (as one interviewee told me), “identifying as a feminist [has become] radical.”

Organisations engaged predominantly in the provision of services (such as training on women’s employment or education), have faced less harsh impacts on their daily operations.

But some women’s organisations have been shut down, especially in the Kurdish regions in eastern Turkey, while others have endured security threats, such as repeated police raids or investigations. Lack of resources means that some are barely able to continue operating.

In one of the interviews in my study, a feminist group described how their developed project idea, including identified funding sources and potential networking partners, had been stolen by another government-loyal organisation.

In 2021, the sector as a whole experienced another blow when Erdoğan’s government announced that it was withdrawing from the Istanbul Convention, the Council of Europe’s treaty on preventing violence against women and domestic violence.

Difficult but not hopeless

My research highlights that feminist organising in Turkey is a difficult business – but not a hopeless one. Despite an increasingly hostile environment, women’s groups continue to carve out space to organise, advocate and mobilise for women’s rights and gender equality.

“They [women-GONGOs] have their strategies, but so do we. We are not desperate,” is how one interviewee described their perspective on feminist organising in Turkey. Another interviewee added that “despite all these circumstances, the women’s movement now comes together much more quickly than before to mobilise for our common interests.”

A recent illustration of how Turkey’s feminists continue to challenge the government’s conservative, anti-gender politics occured at the end of April, when the State Council, Turkey’s highest administrative court, declared the country’s attempted withdrawal from the Istanbul Convention to be illegal. Feminists and allies applauded the decision.

Even as ‘outsiders’, feminist women’s organisations in Turkey remain resilient and active opponents to the anti-rights strategies of the government.