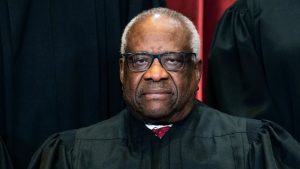 Justice Sonia Sotomayor—joined by the other two liberals on the court—also blasted the majority opinion in Shinn v. Martinez Ramirez, writing in her scathing dissent that the decision is both “perverse” and “illogical.”

The case involved two men, David Martinez Ramirez and Barry Lee Jones, who are on death row in Arizona. The majority determined that inmates can’t present new evidence in federal court to support a claim that their post-conviction attorney in state court was ineffective, in violation of the Sixth Amendment to the U.S. Constitution, which affirms the right to “the assistance of counsel” in criminal all prosecutions.

“A federal habeas court may not conduct an evidentiary hearing or otherwise consider evidence beyond the state court record based on ineffective assistance of state post-conviction counsel,” Justice Clarence Thomas wrote for the majority, adding that “serial relitigation of final convictions undermines the finality that ‘is essential to both the retributive and deterrent functions of criminal law.'”

Sotomayor, meanwhile, wrote that “the Sixth Amendment guarantees criminal defendants the right to the effective assistance of counsel at trial. This court has recognized that right as ‘a bedrock principle’ that constitutes the very ‘foundation for our adversary system’ of criminal justice.”

“Today, however, the court hamstrings the federal courts’ authority to safeguard that right. The court’s decision will leave many people who were convicted in violation of the Sixth Amendment to face incarceration or even execution without any meaningful chance to vindicate their right to counsel,” she warned, also noting that the ruling “all but overrules two recent precedents,” Martinez v. Ryan and Trevino v. Thaler.

In a piece for Slate highlighting how the ruling “will cause profound suffering and perhaps even death as people are denied their constitutional rights,” University of Michigan Law School professor Leah Litman declared that the majority “took a wrecking ball to those decisions.”

This is a really good policy if you want to keep innocent people in prison on a technicality https://t.co/RJwF9SoU3d

In a series of tweets, fellow Michigan law professor Andrew Fleischman pointed out that “without ineffective assistance of counsel claims, there is no procedural vehicle to bring evidence of actual innocence in most states.”

Or let’s look at Jones, who was accused of killing his girlfriend’s daughter on a day she was in his sole care.

He presented evidence that the injury COULD NOT have been inflicted on that day.

Other legal experts were similarly critical on social media. University of Texas professor law Lee Kovarsky called the opinion an “abomination” while public defender Eliza Orlins said: “This is radical. This is horrifying. This is extremely scary.”

“The unceasing stream of callous, radical, reactionary decisions coming from the Supreme Court is fairly easy to miss because so many of them involve complicated points of law,” Stern added. “But the conservative majority is very much in the midst of a revolution. And it is a brutal one.”