“As someone who has enjoyed the benefits of wealth my whole life I know how skewed our economy is and I cannot continue to sit back and wait for someone, somewhere, to do something,” said one demonstrator. 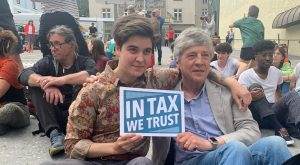 Activists Marlene Engelhorn and Phil White demand that the rich get taxed at a May 22, 2022 protest outside the World Economic Forum conference in Davos, Switzerland. (Photo: Patriotic Millionaires U.K./Twitter)

As some of the world’s wealthiest and most powerful people—sans the usual Russian oligarchs—descend upon the swank Swiss ski resort of Davos for the start of the World Economic Forum’s annual meeting on Sunday, a multinational coalition of millionaires of conscience took direct action to demand that governments #TaxTheRich.

Activists from Patriotic Millionaires, Patriotic Millionaires U.K., taxmenow, and the 99% Initiative, who protested outside the elite compound, had a message for conference delegates: “Extreme wealth is eroding democracy,” and taxing the rich will “reduce inequality and help deal with the cost of living scandal playing out in multiple nations around the world.”

Taxmenow co-founder Marlene Engelhorn, an heir to the founders of chemical giant BASF, explained that “as someone who has enjoyed the benefits of wealth my whole life I know how skewed our economy is and I cannot continue to sit back and wait for someone, somewhere, to do something. I feel there is no option left for us other than to take action.”

As the 1% gather face to face again at the World Economic Forum in the luxury Swiss mountain resort of Davos from today, the Fight Inequality Alliance will protest in cities and towns across the world to say we need to #TaxTheRich.https://t.co/bCfczqhYqm

“Our governments continue to do nothing to address gross inequality and instead meet behind closed doors in this spectacle of private wealth,” she added. “We have hit the end of the line when another quarter of a billion people will be pushed into extreme poverty this year. It’s time to rebalance the world. It’s time to tax the rich.”

Engelhorn was referring to an April Oxfam report warning that a combination of the ongoing Covid-19 pandemic and the Russian invasion of Ukraine—which has sent global food and energy prices soaring, largely due to corporate greed—could push more than a quarter billion people into extreme poverty this year.

Phil White, a member of Patriotic Millionaires U.K. and a former consultant, said in a statement that “while the rest of the world is collapsing under the weight of an economic crisis, billionaires and world leaders meet in this private compound to discuss turning points in history.”

Millionaires Marlene Engelhorn and Phil White in Davos, demanding that the rich get taxed. Time to wake up Davos. #TaxTheRich pic.twitter.com/hbCCvlCgMo

“It’s outrageous that our political leaders listen to those who have the most, know the least about the economic impact of this crisis, and many of whom pay infamously little in taxes,” he continued. “The only credible outcome from this conference is to tax the richest and tax us now. Tax the delegates attending Davos 2022.”

“Protests are happening around the world calling for the richest to be taxed—and there will be more unless our governments act,” White added. “Any millionaire who has sense enough to see that our current economic model is failing will support these protests.”

Earlier this week, Common Dreams reported that a new analysis of U.S. Internal Revenue Service records by the advocacy group Americans for Tax Fairness revealed that the 26 richest billionaires in the United States—the world’s leading perpetrator of financial secrecy—paid an average federal tax rate of just 4.8%.

This is what a rigged and corrupt system looks like.

Patriotic Millionaires U.K. surveyed British public opinion just ahead of the release of the Sunday Times‘ annual Rich List of Britain’s wealthiest people, a ranking that now includes the government’s third-highest-ranking Cabinet minister, Chancellor of the Exchequer Rishi Sunak. It is the first time that a politician, let alone one responsible for the nation’s economic and financial policies, has appeared on the list since it was first published in 1989.

The 250 people on this year’s Rich List are worth a collective £710 billion ($887 billion), an amount greater than the gross domestic product of Saudi Arabia or Switzerland.

According to the poll, the British public believes concentrated extreme wealth is bad for the country and democracy, with 72% of respondents indicating it’s possible for individuals to be too rich and 71% favoring increased taxes on the super-wealthy.

“It’s obvious here that the British public see the dangers of concentrated, extreme wealth more clearly than those with power,” Patriotic Millionaires U.K. founding member Julia Davies said of the poll. “Wealth in the hands of a few people is not a solution to the economic impacts of inequality nor is it a useful deployment of resources in this cost of living crisis.”

In a poll we recently ran on extreme wealth, 70% of respondents believe that extremely wealthy people buy political influence https://t.co/9WEhfya1hD

“The fact that our chancellor now joins the ranks of the richest people in the U.K.—while he and the government refuse to consider taxing wealth over work—is a shocking insight into our political system,” she continued.

“It certainly feels like 70% of respondents in this poll are right to believe that extreme wealth buys political influence,” Davies added. “We have repeatedly asked the chancellor to raise taxes on us, the wealthiest people in society. His appearance on the Rich List makes it very clear why he’s not listening.”