“Ohio Republicans have chosen to pass unconstitutional maps again and again and blatantly ignore the will of voters in order to protect their seats.” 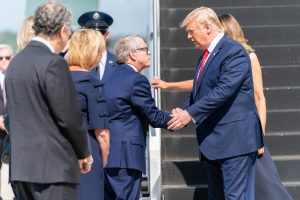 When Ohio voters head to the polls on August 2 for a special primary election, the state legislative candidates on the ballot will be running under districts deemed unconstitutional by the state Supreme Court.

Ohio’s high court struck down proposed state legislative districts as illegal Republican gerrymanders on five separate occasions, but a federal court is poised to implement a previously rejected set of maps as its Saturday deadline is expected to pass without action from right-wing lawmakers in charge of the redistricting process.

The Ohio Supreme Court’s most recent decision in the case came on Wednesday, when it ruled that the GOP-led Ohio Redistricting Commission’s latest map plan—a resubmission of its invalidated third proposal—violates the state constitution’s 2015 prohibition against partisan gerrymandering. State judges ordered the commission to submit a new set of maps by June 3.

🚨BREAKING: Ohio Supreme Court strikes down the commission’s legislative redistricting maps for the 5th time for violating the state constitution after the commission resubmitted a map previously struck down in April. The court orders new maps by June 3. https://t.co/eJWs2hlEM0

On April 20, however, a panel of federal judges gave Ohio a May 28 dead­line to approve a new redis­trict­ing plan that can be imple­men­ted in time for this summer’s primary.

In a 2-1 ruling, U.S. Sixth Circuit Court of Appeals Judge Amul Thapar and U.S. Western District of Kentucky Judge Benjamin Beaton—both appointees of former President Donald Trump—said that if the state failed to act, it would implement the redistricting commission’s third map proposal, which was approved by Ohio Republicans in late February and rejected by the Ohio Supreme Court in mid-March.

At the time, Yurij Rudensky, senior coun­sel in the Demo­cracy Program at the Bren­nan Center for Justice at NYU Law, said that “allow­ing a federal court to dictate the outcome by imple­ment­ing uncon­sti­tu­tional maps would viol­ate the commis­sion’s consti­tu­tional duty and the trust of Ohioans who over­whelm­ingly voted to cleanse the process of partisan abuses.”

Republicans on the Ohio Redistricting Commission largely did nothing during the five weeks the federal court gave them to try to develop a new map. At no point were they known to even have begun working on a map plan, and after waiting several weeks to even hold a public meeting, on May 5, they voted to resubmit the February 28 map, saying it was too late to consider an alternate plan.

“Ohio Republicans have chosen to pass unconstitutional maps again and again and blatantly ignore the will of voters in order to protect their seats,” Democracy Docket noted earlier this week on social media.

What’s happening in Ohio on redistricting is wildly lawless. https://t.co/vFND6h8zOw

In her blistering concurring opinion, O’Connor wrote that the commission “engaged in a stunning rebuke of the rule of law” by resubmitting maps that had already been rejected as illegal. She also criticized the federal court for giving GOP commission members “not only a roadmap of how to avoid discharging their duties but also a green light to delay these proceedings by stating its intention to implement” an “invalid and unconstitutional” map.

Wow. O’Connor ends by saying that the Ohio Supreme Court and state Constitution are being “held hostage” by the commission and legislature (again, which she’s said is due to Republicans’ actions) and that voters have the final say and should not forget this. pic.twitter.com/BjYuAt6LHF

However, the Ohio Supreme Court stopped short of holding Republican members of the commission in contempt for ignoring its directives, denying such motions filed by map-rigging opponents.

According to The Plain Dealer, the maps soon to be implemented by the federal court will only be used for this year’s elections, so Wednesday’s ruling by the state high court “likely turns the focus on what state legislative maps Ohio will use in 2024 and beyond.”

“A legal challenge filed by myriad groups, including voting rights advocates, Democrats, and generally left-leaning advocacy groups, is pending in the Ohio Supreme Court, and could be settled sometime this year,” the newspaper noted. “Meanwhile Republicans, while asking the Ohio Supreme Court to hold off on deciding the state legislative challenge until after the November elections, have signaled they hope to run the clock until O’Connor leaves office at the end of the year due to state age limits on judges.”