“Every few paragraphs of the majority opinion has another line that dismissively and casually cuts apart tribal independence that Native ancestors gave their lives for,” observed one Indigenous law professor. 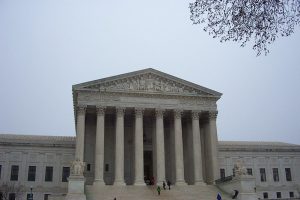 The United States Supreme Court in Washington, D.C. ruled on June 29, 2022 that authorities in Oklahoma and other states can prosecute certain crimes on sovereign tribal land. Photo: Beatrice Murch/flickr/CC

Indigenous leaders on Wednesday condemned a U.S. Supreme Court ruling that allows authorities in Oklahoma and other states to prosecute certain crimes on sovereign tribal land, a narrowing of a landmark 2020 decision affirming Native treaty rights.

Writing for the majority in the 5-4 Oklahoma v. Castro-Huerta decision—in which Neil Gorsuch joined the three liberal justices in dissent—Justice Brett Kavanaugh asserted that “the federal government and the state have concurrent jurisdiction to prosecute crimes committed by non-Indians against Indians in Indian Country.”

The ruling rolls back the court’s 2020 McGirt v. Oklahoma ruling, which affirmed that nearly half of Oklahoma is actually Native American land and that Congress must honor an 1866 treaty between the U.S. government and the Muscogee Nation, one of the numerous tribes forcibly removed from the Southeast via the genocidal Trail of Tears in the 19th century.

The Muscogee Nation tweeted that the ruling “is an alarming step backward for justice on our reservation in cases where non-Native criminals commit crimes against Native people.”

“It hands jurisdictional responsibility in these cases to the state, which during its long, pre-McGirt history of illegal jurisdiction on our reservation, routinely failed to deliver justice for Native victims,” the tribe continued.

The rules of law on most reservations “was relatively insignificant in the real world.”

And “Indian country is part of a State, not separate from a State.”

“This will have a ripple effect throughout Indian Country across the United States,” Muscogee Nation added. “Public safety would be better served by expanding tribal authority to prosecute any crime committed by any offender within our reservation boundaries rather than empowering entities that have demonstrated a lack of commitment to public safety on Indian lands.”

“The right and power of tribes to rule themselves is being dismissed in favor of state power,” she continued, blasting the “grotesque hypocrisy” in the high court’s logic that tribes “can’t prosecute most crimes [on] their own land without permission from Congress because it would be anti-democratic but states… can be trusted to prosecute people on tribal lands.”

Gary Batton, chief of the Choctaw Nation, said he was “disappointed,” but stressed that “this ruling does not affect the main holding of the McGirt decision, which affirmed tribal sovereignty and requires the United States to uphold its treaty obligations.”

While we are disappointed in today’s #SCOTUS decision in #CastroHuerta, it does not diminish our commitment to meeting our public safety responsibilities and to protecting Oklahomans on our reservations and across the state.

In his Castro-Huerta dissent, Gorsuch—a reliable vote for Indigenous treaty rights who authored the court’s majority in McGirt—implored, “One can only hope the political branches and future courts will do their duty to honor this nation’s promises even as we have failed today to do our own.”

Oklahoma Gov. Kevin Stitt—a Republican and Cherokee Nation citizen of dubious provenance who has been accused by Cherokee leadership of attacking the tribe’s sovereignty—hailed Wednesday’s decision.

“Today’s ruling is a clear victory for all four million Oklahomans and the rule of law,” the governor tweeted. “The Supreme Court upheld that Indian Country is part of a state, not separate from it.”

Hidalgo Reese warned “everyone who’s been asking about Indian tribes being safe havens for abortion care” following the Supreme Court’s recent reversal of Roe v. Wade and subsequent trigger bans in over a dozen states including Oklahoma that “SCOTUS just made sure they can’t be in this Castro-Huerta opinion.”