“Corporations are not your allies in the advancement of civil rights,” said one observer. 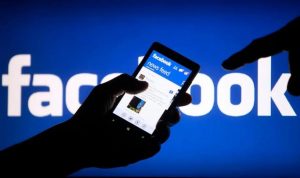 Since the U.S. Supreme Court’s reactionary majority struck down Roe v. Wade last Friday, Facebook and Instagram have been swiftly removing posts informing people that they can obtain federally approved abortion pills through the mail while ignoring posts offering to mail guns.

An Associated Press reporter’s Facebook post that said, “If you send me your address, I will mail you abortion pills,” was removed within one minute on Monday, according to the news outlet.

However, when the reporter “made the same exact post but swapped out the words ‘abortion pills’ for ‘a gun,’ the post remained untouched,” AP reported Tuesday. “A post with the same exact offer to mail ‘weed’ was also left up and not considered a violation.”

Lee Hepner, an anti-monopoly lawyer at the American Economic Liberties Project, responded to AP‘s experiment by tweeting, “Large corporations are not your allies in the advancement of civil rights.”

Motherboard first reported that Facebook is promptly taking down posts that say abortion pills can be mailed and in some cases suspending users who share this information. AP has confirmed that Instagram is also quickly deleting such posts.

Meta, the parent company of Facebook and Instagram, began to crack down on users for sharing memes and status updates about abortion pills shortly after the high court issued its 6-3 ruling that eradicated the constitutional right to abortion, immediately leaving people with unwanted pregnancies without necessary medical care in several Republican-controlled states and endangering many more nationwide.

However, a test conducted Friday by Motherboard shows that Facebook is removing posts and sometimes temporarily banning users for simply pointing out that abortion pills are available via mail—not just those offering to send them. 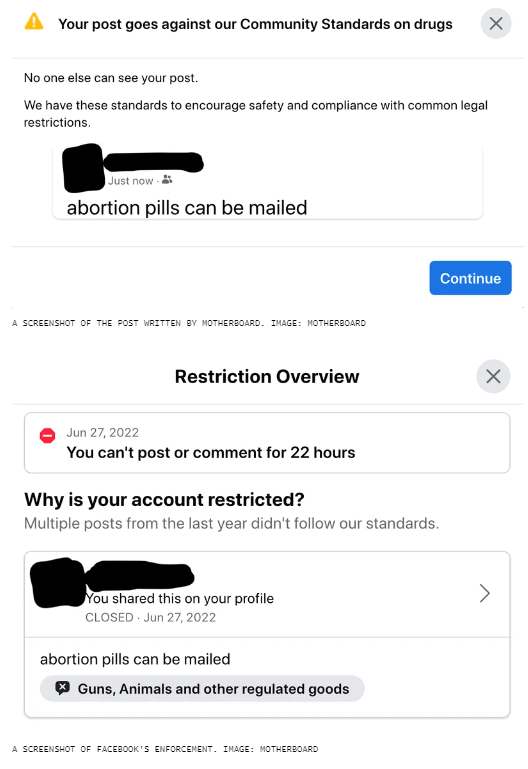 Facebook did not reply to Motherboard‘s request for comment, but after the story was published on Monday, Meta spokesperson Andy Stone tweeted that users are not permitted “to buy, sell, trade, gift, request, or donate pharmaceuticals.”

However, he continued, “content that discusses the affordability and accessibility of prescription medication is allowed. We’ve discovered some instances of incorrect enforcement and are correcting these.”

In 2021, the U.S. Food and Drug Administration (FDA) made it legal to obtain abortion pills through the mail following a telehealth consultation with trained and certified prescribers.

Medication—already used for a majority of abortions in the U.S.—is poised to play an even more important role in post-Roe America, especially in states with forced pregnancy laws.

At least 11 GOP-controlled states have already outlawed or severely restricted abortion and 15 more are expected to eliminate or drastically reduce legal access to abortion in the coming weeks.

Sending abortion pills through the mail has been criminalized in at least eight states and could soon be deemed illegal in more.

Although it matters “who does the sending and where that person lives,” Motherboard reported that “doctors around the U.S. are concerned about getting themselves and their clinics in trouble for sending medication to a state that has banned abortion.”

CNBC reported Monday that people in states with abortion bans “will still be able to end unwanted pregnancies with abortion pills ordered online from overseas, though the legal situation is murky and carries potential risks.”

Attorney General Merrick Garland, meanwhile, said Friday that the U.S. Department of Justice is prepared “to work with other arms of the federal government that seek to use their lawful authorities to protect and preserve access to reproductive care,” foreshadowing a legal battle between the Biden administration and multiple state governments.

The FDA has approved the use of mifepristone—an abortion pill taken with misoprostol—Garland said, and states may not ban the medicine “based on disagreement with the FDA’s expert judgment about its safety and efficacy.”