“We can’t keep pretending everything is all right, studying as if the planet wasn’t on fire.” 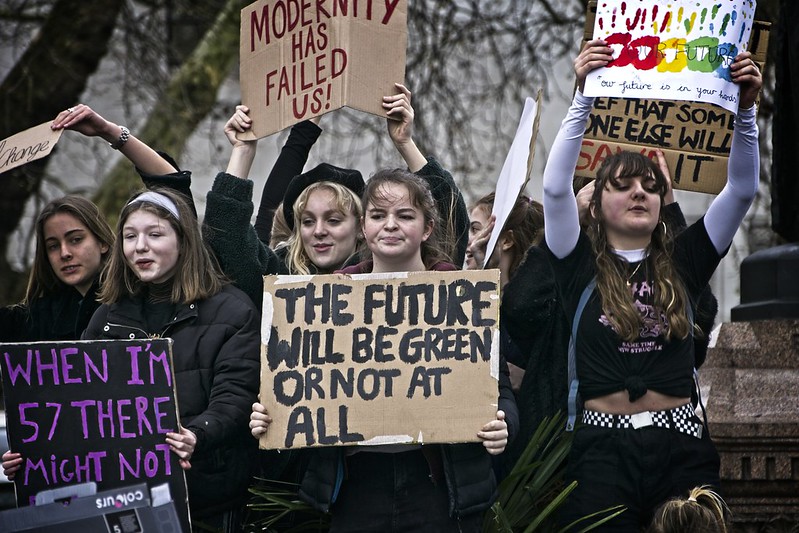 Students from around the world announced Tuesday their intention to “disrupt business as usual” at their universities and schools this fall, pressuring administrators and policymakers to ramp up efforts to combat the climate crisis by holding occupations and refusing to attend classes as normal.

Dozens of students and student groups co-signed an op-ed published by The Guardian, promising that their new campaign, “End Fossil: Occupy!” will include young people from across the globe demanding “the end of the fossil economy.”

“Taking a lesson from student activists in the 1960s, the climate justice movement’s youth will shut down business as usual,” said the organizers. “Not because we don’t like learning, but because what we’ve learned already makes it clear that, without a dramatic break from this system, we cannot ensure a livable planet for our presents and futures.”

The occupations of hundreds of educational institutions will take place between September and December 2022, they said.

The op-ed was signed by students from countries including Portugal, Spain, Argentina, the U.S., the Ivory Coast, and the U.K. Occupations are already planned at Emerson College in Boston, Leeds University in the U.K., and the Ivory Coast’s capital of Abidjan.

Students will focus their demands on fossil fuel divestment by universities and the end of fossil fuel extraction, with local organizers determining the key demands for their area. According to End Fossil: Occupy!, all the school occupations will be centered on three principles:

“We can’t keep pretending everything is all right, studying as if the planet wasn’t on fire,” the group wrote. “As other students did before us—from the students of May of ’68 in France to the Arab spring, from the Chilean Penguin Revolution and Primavera Secundarista in Brazil to Occupy Wall Street—we will stop our business-as-usual lives to show our governments and society that we need to change everything, now.”

“From Lisbon to California, from Peru to Germany and from Madrid to Ivory Coast, we call on young people to get together and organize an international revolutionary generation that can change the system,” they added.

The youth-led climate justice movement saw its biggest mobilization in September 2019, when an estimated four million people participated in global climate strikes inspired by Swedish campaigner Greta Thunberg. The demonstrations are believed to be the largest mass protest for climate action in history.

The Covid-19 pandemic took a toll on the momentum of the movement, according to End Fossil: Occupy!

Since the pandemic hit, the inaction of global leaders has angered advocates at international summits including last year’s United Nations Climate Change Conference (COP26), where policymakers failed to commit to financing climate action in the Global South.

The world’s biggest oil companies are now “on track to spend $103 million on planetary destruction projects every day for the rest of the decade,” said the organizers.

“Since giving in to defeatism will never be an option for us, we must now organize at a massive scale,” they wrote. “We need to create a new peak of mobilization, even bigger than 2019. If we were waiting for a sign, this is it. With temperatures climbing faster and faster, we have never been so certain that mobilizing bigger than ever is not only possible, but existentially necessary.”

We need to end the fossil economy, and we need to do it now.

We support the occupations of schools and univeristies hapenning this fall, from September to December 2022. Occupy until we win! ✊

“We need to end the fossil economy, and we need to do it now,” said Scientist Rebellion Turtle Island in the U.S. and Canada.

The organizers noted that students around the world attend schools that are directly linked to the fossil fuel economy, with prestigious institutions including McGill, Yale University, and Oxford University continuing to invest in extraction projects.

“In other cases, they are indirectly linked to it,” they said. “They train us for a world that has no future, a world of fossil capitalism. They want us to sit in school and learn as if everything was fine. But the world we are learning for—the world that created the climate crisis—has no future.”

With hundreds of school occupations this fall, End Fossil: Occupy! said, “we will revive the youth movement, create new alliances, radicalize, engage the whole of society to support and occupy, and envision the world we want—where life and not profit is at the center.”

“We will rise up in justice and liberation to crush the fossil fuel industry,” they continued. “We shall have no doubt: the youth are a revolutionary subject. We will turn the tide, change history, and smash the fossil economy.”