“Remember the days when taking half a million bucks from an industry, and then passing legislation that only benefits that industry, while passing the costs onto everyone else, would be called corruption?” asked one critic. “Today it’s just lobbying as usual.” 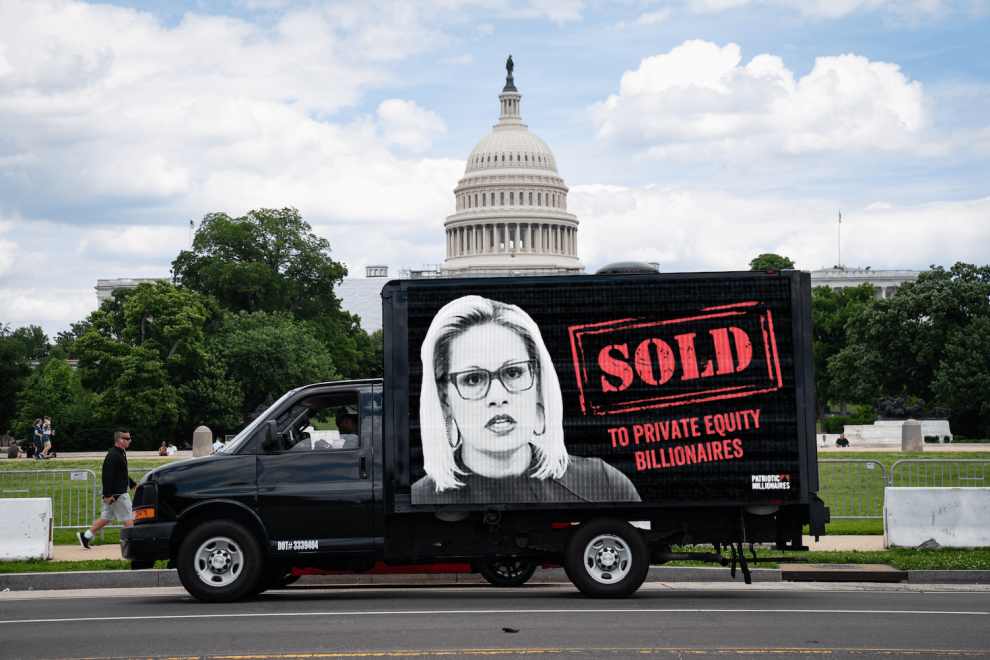 Senate Democrats passed a pared-backed reconciliation package on Sunday, but only after a pair of widely supported provisions that would have made it harder for Wall Street tycoons to reduce their tax bills were removed at the behest of Sen. Kyrsten Sinema—the right-wing Arizona Democrat who has taken more than $500,000 in campaign contributions from private equity executives during the current election cycle.

“Remember the days when taking half a million bucks from an industry, and then passing legislation that only benefits that industry, while passing the costs onto everyone else, would be called corruption?” Brown University political economist Mark Blyth asked on social media. “Today it’s just lobbying as usual.”

Remember the days when taking half a million bucks from an industry, and then passing legislation that only benefits that industry, while passing the costs onto everyone else, would be called corruption? Today its just lobbying as usual: https://t.co/TY6Atyi5mf

Last week, Sinema agreed to back the Inflation Reduction Act as long as the so-called “carried interest loophole,” which benefits hedge fund managers and private equity moguls by allowing their investment income to be taxed at the long-term capital gains rate of around 20% rather than the ordinary top income rate of 37%, was preserved.

Democrats, who needed Sinema’s support to pass the filibuster-proof bill through the evenly split Senate, obliged, forgoing a modest reform that would have raised an estimated $14 billion in federal revenue over a decade by increasing the holding period for investments to qualify for preferential tax treatment from three to five years.

As the Financial Times noted Monday, the Arizona Democrat “is a beneficiary of significant contributions from the private equity industry—whose lobbying machine and political influence have grown increasingly powerful over the past two decades.”

Sinema has received more than half a million dollars in campaign donations from private equity group executives in this election cycle alone, representing about 10% of her fundraising from individual donors. This includes individual donations totalling $54,900 from executives at KKR, $35,000 from Carlyle, $27,300 from Apollo, $24,500 from Crow Holdings Capital and $23,300 from Riverside Partners.

The securities and investment sector as a whole has donated more than $2.2 million to Sinema since she was elected in 2017, according to OpenSecrets. Former U.S. Labor Secretary Robert Reich quipped last week, amid reports of Sinema’s plans to undermine her party’s efforts to hike taxes on corporations and the wealthy, that Wall Street is “getting a huge return on their investment.”

In addition to stripping the carried interest provision from the Inflation Reduction Act, Sinema protected private equity-owned corporations from a new 15% minimum tax on billion-dollar firms.

As originally written, the provision would have required private equity firms to tally profits from their various holdings and pay the tax if the total exceeded the $1 billion threshold.

Sinema, who for over a year has blocked Democratic ambitions to raise taxes, raised objections on Saturday, according to two people with knowledge of the matter, who spoke on the condition of anonymity to discuss private talks. The senator argued that, without changes to the bill, small and medium-sized businesses that happen to be owned by private equity firms would be exposed to the tax, violating a Democratic pledge to hike taxes only on the largest firms. A Sinema spokeswoman said several Arizona small businesses, including a plant nursery, had raised concerns.

Steve Wamhoff, an analyst at the Institute on Taxation and Economic Policy, a progressive think tank, told the Post, “The idea that billion-dollar private equity funds must be protected to save small businesses is absolutely absurd.”

Nevertheless, the newspaper noted, “the last-minute changes mark a significant victory for the private equity industry and an estimated savings of $35 billion over the next decade.”

Following the passage of the Inflation Reduction Act on Sunday, the progressive tax reform group Patriotic Millionaires ran a mobile billboard around the Capitol to thank Senate Democrats, with the exception of Sinema, who was denounced for being bought by private equity billionaires. The truck made stops at the offices of the American Investment Council and the Carlyle Group in Washington, D.C.

It’s clear that she doesn’t work for her constituents, she works for her private equity and hedge fund billionaire supporters. pic.twitter.com/sTcSUzDAHb

“Bravo to 49 of the 50 senators who voted today to end an era of rampant criminal tax abuse at the highest levels of American society and American business,” Erica Payne, founder and president of Patriotic Millionaires, said in a statement. “In a journey of 1,000 miles, this is an impressive first step.”

“Shame on Sen. Kyrsten Sinema, who had to be dragged kicking and screaming across the finish line, carrying water for her private equity overloads to the bitter end,” Payne continued. “Thanks in large part to Sinema’s obstruction, there’s more work to be done, but the Inflation Reduction Act is a monumental step in the right direction.”