“We must push back,” said one doctor. “Free provision of vaccinations, Paxlovid, and monoclonals has been critically important.” 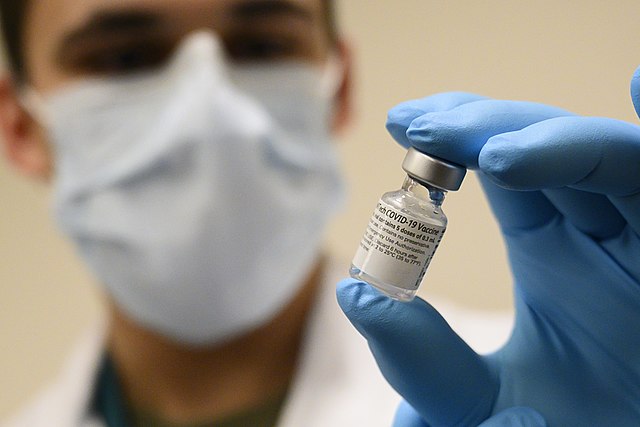 Advocates for a more just healthcare system responded with alarm to Thursday reporting that the Biden administration is taking steps to stop paying for Covid-19 vaccines and treatments in the coming months, a move critics fear will lead to higher prices and more expensive coverage, enriching pharmaceutical and insurance giants at the expense of patients.

The U.S. Department of Health and Human Services (HHS) plans to meet with representatives from drug manufacturers, pharmacies, and state health departments on August 30 to “map out” how to shift the bill for coronavirus jabs and therapeutics from the federal government to individuals, according to The Wall Street Journal.

The looming transition that many have anticipated and resisted since the onset of the ongoing pandemic is expected to take months.

“We’ve known at some point we’d need to move over into the commercial market, and we’re approaching that time now,” said Dawn O’Connell, assistant secretary at HHS for preparedness and response. “We don’t want to do it by fiat.”

Progressives, however, argue that no change of the sort should happen regardless of how much planning goes into it.

Adam Gaffney, an assistant professor of medicine at Harvard University and a pulmonary and intensive care unit doctor, called the proposal to commercialize the procurement and provision of Covid-19 vaccines and treatments a “terrible idea.”

“We must push back,” Gaffney, the past president of Physicians for a National Health Program, wrote on social media. “Free provision of vaccinations, Paxlovid, and monoclonals has been critically important—even if disparities persisted.”

As the Journal reported:

Switching vaccine purchasing to the commercial market would mean that each insurer and pharmacy benefit manager would be negotiating with drug manufacturers and prices would likely be higher than what the federal government has paid, said Larry Levitt, executive vice president for health policy at the Kaiser Family Foundation. Insurers would have to start paying for the vaccines, he said, likely raising premiums.

“Without the government purchasing vaccine doses in advance, the U.S. may fall behind other countries in getting quick access to boosters and new variant-specific vaccines,” Mr. Levitt said.

Other challenges include the timetable each drug or vaccine manufacturer has for when they want to move into the commercial market. Also, Medicare and Medicaid, federal insurance programs for older and lower-income people respectively, don’t cover antivirals because they are only approved under an emergency-use authorization.

Tahir Amin, an intellectual property lawyer and co-executive director of the Initiative for Medicines, Access, and Knowledge (I-MAK), described the Biden administration’s plan as a “recipe for disaster, unless you are a pharmaceutical company or other profit center in the healthcare market.”

“You just have to remember the nonsense that went on with the cost of testing,” Amin tweeted. Before the White House begrudgingly began mailing free at-home Covid-19 tests directly to U.S. households earlier this year, Americans were being severely overcharged for diagnostic tools that were developed with billions in public money.

Transferring the acquisition of Covid-19 shots and therapeutics, which also owe their existence to years of taxpayer-funded research, to the commercial market portends billions of dollars in additional profits for Big Pharma.

Pfizer, Moderna, and other corporations reported at least $79 billion in combined global sales of coronavirus vaccines and treatments in 2021, according to the Journal‘s review of earnings reports. In the second quarter of 2022, Pfizer raked in another $8.1 billion for global sales of Paxlovid, its inequitably distributed antiviral pill, alone.

While the Biden administration’s plan could be a bonanza for Big Pharma, it throws into question how the nation’s millions of uninsured and underinsured people will access Covid-19 jabs and treatments once the federal government stops making them available at no cost.

Funding for the pandemic response is dwindling rapidly. Although the White House in February requested $30 billion from Congress to fight the public health emergency at home and abroad, opposition from Republicans has prevented a significantly smaller package from moving forward.

GOP lawmakers want to repurpose aid allocated to states under the American Rescue Plan, insisting that no new relief money should be approved until existing finances are exhausted, and they are opposed to any amount of new spending aimed at bolstering international efforts to defeat Covid-19—a disease that has been made far deadlier by global vaccine apartheid.

Such right-wing obstructionism is leading to what Gaffney earlier this year characterized as “the rationing of Covid-care by ability to pay.”

He said that in March, after a federal health agency tasked with covering coronavirus testing and treatment for uninsured people in the U.S. ran out of funds and stopped accepting claims, a change that has led to patients being charged $125 for a single PCR test.

In May, the Biden administration announced that it is preparing to ration vaccines due to Senate Republicans’ continued stonewalling of new pandemic spending.

The ongoing pandemic has already led to more than one million deaths in the U.S. and 15 million globally. Earlier this year, the White House warned that a coronavirus wave this fall and winter could infect up to 100 million people around the country.

People in the U.S. have died from Covid-19 at a significantly higher rate than their counterparts in other wealthy nations—with poor counties suffering twice as many deaths as rich ones.

The nation’s pandemic death toll, progressives argue, is an indictment of its profoundly unequal socio-economic order, which lacks lifesaving rights like universal healthcare, paid sick leave, and other benefits enjoyed in countries with higher levels of union density.

A recent analysis found that a single-payer healthcare system such as Medicare for All could have prevented more than 338,000 Covid-19 deaths nationwide.