“The future of Social Security and Medicare is on the ballot this November,” said one advocate. “Republicans, led by Kevin McCarthy, are united in a plot to reach into our pockets and steal our money.” 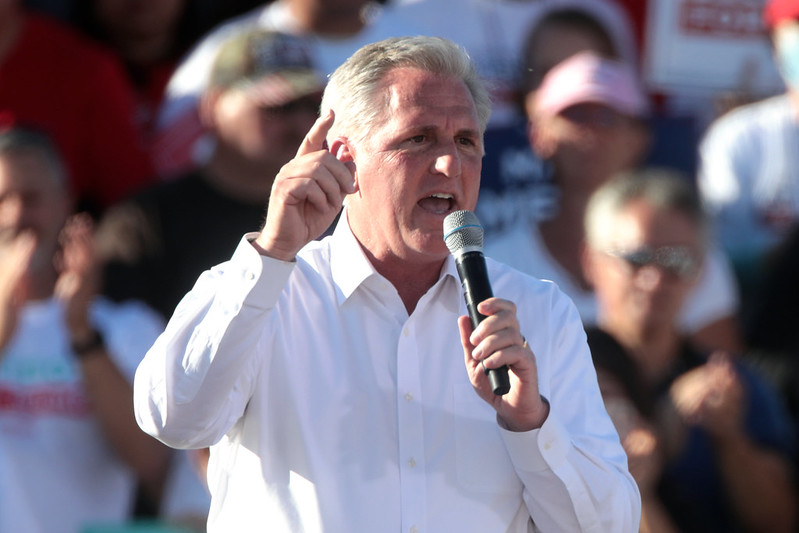 Progressives on Tuesday warned that U.S. voters should take House Minority Leader Kevin McCarthy and other Republicans at their word when they threaten to enact cuts to Social Security and Medicare despite the cost-of-living crisis that already has Americans struggling to afford healthcare and other essentials.

In an interview with Punchbowl News Tuesday, the California Republican outlined plans to use the expected fight over the raising of the debt ceiling next year as leverage to pass several austerity policies and block additional aid for Ukraine, as well as blocking pandemic-related spending.

Kevin McCarthy is very clear that he is going to force Biden to choose between defaulting on the US debt and slashing trillions in spending on medical research, safety net programs, pandemic prevention, etc.https://t.co/MlZSAUWl2V pic.twitter.com/YzScvWIH6w

“If people want to make a debt ceiling [for a longer period of time], just like anything else, there comes a point in time where, okay, we’ll provide you more money, but you got to change your current behavior,” McCarthy told the outlet. “And we should seriously sit together and [figure out] where can we eliminate some waste?”

The “behavior” and supposed “waste” McCarthy has in mind likely includes the New Deal-era Social Security program, which helps keep 22.1 million Americans out of poverty, and Medicare. Working Americans’ taxes keep both programs running and allow millions to benefit from them, but Republicans including Sens. Ron Johnson (Wis.) and Rick Scott (Fla.) have said this year that they should not be considered mandatory programs and should instead be brought up for a vote every five years or even annually.

McCarthy told Punchbowl that he wouldn’t “predetermine” the “structural changes” his party plans to make to Medicare and Social Security, but he did suggest the Republicans will exploit the raising of the debt limit, which is expected by the second half of 2023, to force changes.

The debt limit is the amount of money the federal government is permitted to borrow to meet its existing legal obligations, including Medicare, Social Security, tax refunds, and other payments. Failing to raise the debt ceiling and defaulting on those obligations could cause a global financial crisis.

Sen. Bernie Sanders (I-Vt.) accused the Republicans of planning to “hold the full faith and credit of the U.S. government hostage unless they are able to enact huge cuts” to the programs.

The Republican “solution” to inflation is to hold the full faith and credit of the US government hostage unless they are able to enact huge cuts to Social Security and Medicare at a time when 55% of seniors are trying to survive on less than $25,000 a year. Outrageous.

Social Security Works, which advocates for the strengthening and expansion of the Social Security program, urged voters to make their decisions with McCarthy’s words in mind.

“Kevin McCarthy says he will cut Social Security and Medicare if he becomes Speaker,” the group said. “Believe him!”

The Republican leader’s comments represent just the latest time the party has publicized “their #1 priority if they gain control of Congress: Cut, privatize, and ultimately destroy the American people’s earned Social Security and Medicare benefits,” said Alex Lawson, executive director of the group.

“The future of Social Security and Medicare is on the ballot this November. Democrats are united in support of protecting and expanding benefits,” he added. “Republicans, led by Kevin McCarthy, are united in a plot to reach into our pockets and steal our money.”

The GOP has long repeated false claims that Social Security and Medicare are unaffordable for the U.S. As progressives including Sanders have said in recent months, based on the latest report from the Board of Trustees of the Federal Old-Age and Survivors Insurance and Federal Disability Insurance Trust Funds, the program is fully funded until 2035 and would be able to pay out 90% of benefits for the next 25 years, even without Congress passing legislation that Democrats have proposed to expand it.

With the New York Times‘ latest polling showing that Republicans have gained a significant advantage in the upcoming midterm elections, Jim Roberts of The 74 warned, “to put it bluntly, the future of Medicare and Social Security hangs in the balance this November.”

Journalist Judd Legum noted Tuesday that while Republicans have been clear with the political press about their intentions, they aren’t running ads promising Social Security and Medicare cuts.

That is likely because “recent polling shows that 77% of Americans, including 76% of Republicans, support increasing Social Security benefits,” he said.

As Common Dreams reported Monday, progressive strategists are calling on the party to spend the final three weeks before the election focusing intently on Republicans’ plans to cut programs millions of Americans count on—Democrats’ proposals to strengthen those programs, hold corporate price-gougers accountable, and bring relief to working families.

With Kevin McCarthy on record saying a House GOP majority would create a debt crisis to cut spending like Social Security and Medicare, the press has another opportunity to give the issue the coverage it deserves https://t.co/ptzxeTROK9 pic.twitter.com/D2DRIToVsr

“The media should inform voters about the stakes of this election, not carry water for Republicans by hiding their plans!” tweeted Social Security Works.