“There have been at least 290,000 deaths from Covid-19 since the WTO punted on the question of global access to tests and treatments back in June,” said one advocate. “How many more need to die before the U.S. joins the right side of history?” 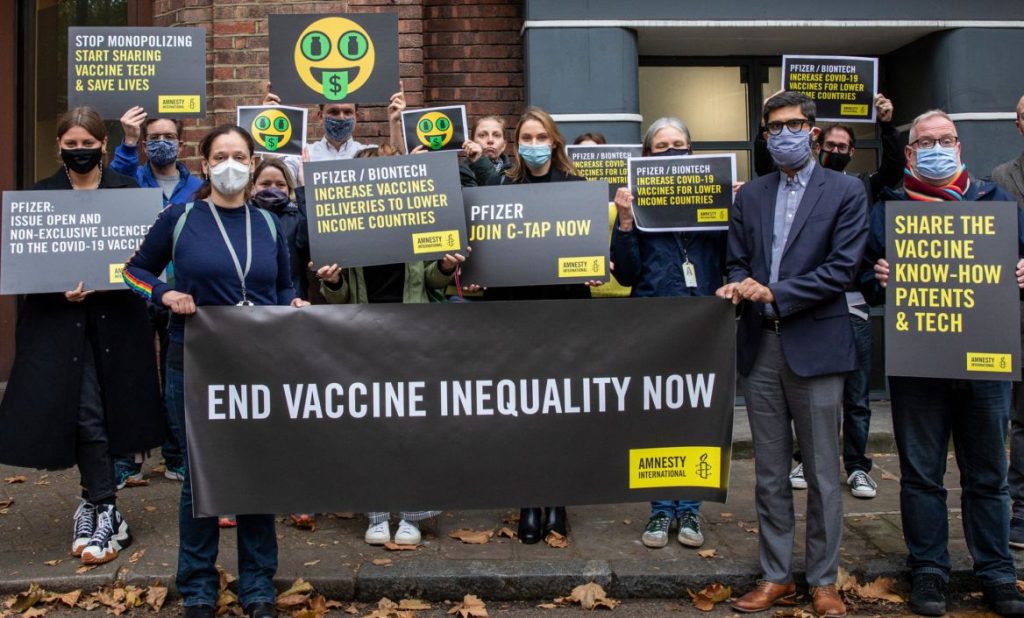 In a statement released on Tuesday morning, U.S. Trade Representative Katherine Tai said that “over the past five months, USTR officials held robust and constructive consultations with Congress, government experts, a wide range of stakeholders, multilateral institutions, and WTO members.”

Real questions remain on a range of issues, and the additional time, coupled with information from the USITC [United States International Trade Commission], will help the world make a more informed decision on whether extending the ministerial decision to Covid-19 therapeutics and diagnostics would result in increased access to those products. Transparency is critical and USTR will continue to consult with Congress, stakeholders, and others as we continue working to end the pandemic and support the global economic recovery.

As Bloomberg reported, investigations of the sort that Tai wants the USITC to pursue “can take nine months to a year to complete,” pushing the prospects for a comprehensive waiver of the WTO’s Agreement on Trade-Related Aspects of Intellectual Property Rights (TRIPS) well into 2023 or beyond.

Dr. Mohga Kamal-Yanni, policy co-lead for the People’s Vaccine Alliance, said in response that “it is heartbreaking to see the Biden administration succumb to pressure from pharmaceutical company lobbyists and their henchmen in Congress.”

“This moment of weakness will cost countless lives in low- and middle-income countries, leading to continued economic devastation,” said Kamal-Yanni, “while a handful of pharmaceutical CEOs and shareholders will get even richer.”

“The U.S. has had more than two years to meaningfully engage in WTO negotiations over access to lifesaving tests and treatments,” she added. “Kicking the issue further into the long grass, just as the negotiating deadline approaches, is pathetic.”

This sentiment was echoed by Arthur Stamoulis, executive director of the Trade Justice Education Fund.

“There have been at least 290,000 deaths from Covid-19 since the WTO punted on the question of global access to tests and treatments back in June,” said Stamoulis. “How many more need to die before the U.S. joins the right side of history?”

“We’re in the third year of the pandemic and billions of people worldwide still don’t have access to Covid tests, vaccines, and medicines,” Stamoulis continued.

Large swaths of the Global South have been deprived of lifesaving Covid-19 medical tools and remain completely unprotected, with less than 25% of people in low-income countries having received at least one vaccine dose to date.

Experts have long argued that pausing enforcement of the corporate-friendly TRIPS Agreement for the duration of the pandemic would remove the intellectual property barriers standing in the way of increased generic manufacturing. However, in June, Big Pharma-aligned policymakers—most of them from highly vaccinated rich countries—defeated a popular proposal to waive coronavirus-related patents to boost the global supply of jabs, diagnostics, and therapeutics.

Instead, the WTO, which operates on the consensus of its 164 members, adopted a watered-down alternative pertaining only to vaccines—described by critics as worse than the status quo—and vowed to decide whether to extend the decision to cover tests and treatments within six months. The Biden White House’s new demand for a delay—in which they joined the European Union, United Kingdom, Japan, South Korea, Singapore, and Switzerland—comes just days before the December 17 deadline.

As Knowledge Ecology International director James Love pointed out on social media, the U.S. government blocked the proposed TRIPS waiver for tests and treatments after telling the World Health Organization that it is opposed to including intellectual property flexibilities in an emerging WHO pandemic treaty “because that’s a conversation for the WTO.”

Yesterday the US government told the WHO they don’t want intellectual property rights discussed in the WHO pandemic treaty, because that’s a conversation for the WTO. Also, same day, blocked WTO agreement on exceptions for COVID 19.

Meanwhile, the need for improved access to tests and treatments is particularly acute in poor countries, given the ongoing severity of global vaccine apartheid.

The WHO estimates that just one in every 50 tests is administered in low- and middle-income nations home to 84% of the global population. While publicly available data on treatment access is sparse, a recent analysis from Oxfam and the People’s Vaccine Alliance shows that just a quarter of Pfizer’s Paxlovid pill orders are destined for developing countries.

Pfizer’s licensing agreement with the United Nations-backed Medicines Patent Pool enables other drugmakers to produce its pill for generic consumption in just 95 countries representing 53% of the global population. As a result, excluded countries, many of which are not wealthy, may be forced to pay $250 per course rather than $25.

Globally, the ongoing Covid-19 pandemic has caused more than 15 million deaths directly and indirectly, and the disease alone continues to kill roughly 1,500 people per day.

The profoundly inequitable allocation of medicines—fueled by high-income nations snatching up a disproportionate share of vaccines, tests, and treatments and pharmaceutical corporations refusing to share knowledge and technology—has exacerbated avoidable suffering. Artificially imposed scarcity and uneven distribution also enables the coronavirus to continue circulating and mutating, increasing the likelihood of a vaccine-resistant variant emerging.

A recent investigation revealed the extent to which Big Pharma has lobbied against a robust intellectual property waiver for Covid-19 jabs, diagnostics, and therapeutics—and worsened deadly inequality in the process.

Tai’s “call for ‘more information’ cannot be an excuse for inaction,” Stamoulis said Tuesday. “While pharmaceutical monopolies make billions, people are still dying, others are getting long Covid, the economy is suffering, and new variants remain a constant threat.”

“It’s long past time,” he added, “for the Biden administration to support the modest changes to WTO pharmaceutical monopoly protections standing in the way of Covid test and treatment access around the world.”