“The people of Flint deserve justice—and it’s unacceptable that the people responsible for Flint’s water crisis aren’t being held accountable,” said Food & Water Watch in response to the development. 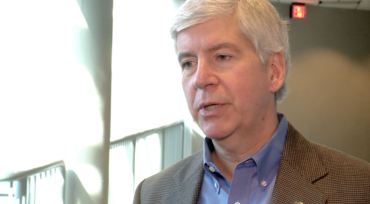 Environmental justice advocates on Friday condemned a move by a district judge in Michigan to drop two misdemeanor charges against former Republican Gov. Rick Snyder in connection with the 2014 Flint water crisis that killed dozens of residents of the predominantly Black city and poisoned thousands more.

According to the paper:

Behm cited a Michigan Supreme Court ruling from June which stated government prosecutors erred in 2021 when they had a circuit judge serve as a “one-man grand jury” to indict Snyder and the other officials. She also noted circuit court rulings to dismiss charges against other former state officials which cited the Supreme Court ruling.

“The people of Flint deserve justice—and it’s unacceptable that the people responsible for Flint’s water crisis aren’t being held accountable,” the advocacy group Food & Water Watch tweeted in response to the dropped charges.

100,000 people in the Black-majority city were exposed to lead when the city changed its water supply to cut costs.

No one has been convicted. pic.twitter.com/SQ7T55Elay

Tom Ivacko, director of the Gerald R. Ford School of Public Policy at the University of Michigan’s Center for Local, State, and Urban Policy, said on Twitter that “the Flint water crisis was an abject failure of governance at all levels, and the ultimate price was paid by the residents of Flint.”

“While the legal ramifications continue to play out, residents need to claim their role in holding the government accountable,” Ivacko continued. “Policymakers need to redouble their efforts to increase government transparency and improve the workings of government.”

Journalist Jordan Chariton noted on Twitter, “Nearly 9 years into #FlintWaterCrisis, not one government official in prison.”

Flint’s water became tainted with lead after city managers appointed by Snyder began using the Flint River in 2014 to save money while a new pipeline to Lake Huron was built. The water wasn’t treated to reduce its corrosive qualities, causing lead to break off from old pipes and contaminate the system for more than a year.

The Michigan Civil Rights Commission said it was the result of systemic racism, doubting that the water switch and the brush-off of complaints in the majority-Black city would have occurred in a white, prosperous community.

Flint residents complained about the water’s smell, taste and appearance, raising health concerns and reporting rashes, hair loss and other problems. Snyder didn’t acknowledge that lead was a problem until 17 months after the water switch, in fall 2015, when he pledged to take action.

In addition to lead poisoning, a 2014-15 outbreak of Legionnaires disease caused by the water emergency officially killed 12 people, although an investigation found that the actual death toll may have been up to 10 times higher.

Responding to Friday’s development, the Flint Water Prosecution Team said in a statement that “this decision is not surprising, and the prosecution will appeal.”

“We anticipated that this ruling would be similar to other outcomes that only considered process,” the prosecutors continued. “Our team has been preparing for this and looks forward to addressing these issues in court. As we have reiterated time and again, rulings up to this point have been on process alone—not on the merits of the case.”

“We are confident that the evidence clearly supports the criminal charges against Rick Snyder,” the team added, “and we will not stop until we have exhausted all possible legal options to secure justice for the people of Flint.”