“Joe Biden ran for president as an abolitionist… It is time for him to put this country on record as committed to ending the death penalty.” 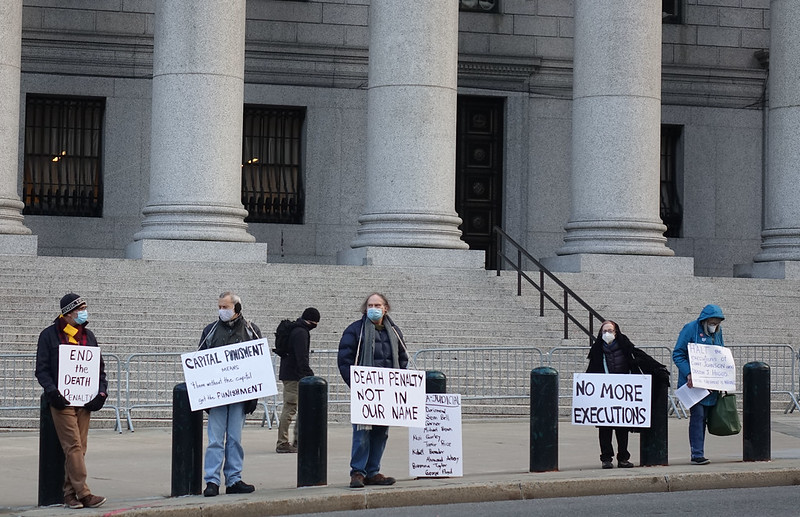 Vigil for Corey Johnson at the Supreme Court on January 14, 2021. Photo: Felton Davis/flickr.CC

President Joe Biden’s stated opposition to the death penalty did not stop the United States from joining Saudi Arabia, Iran, and North Korea in voting against a United Nations resolution supporting a worldwide moratorium on the practice on Thursday, leading critics to question once again whether the president will make good on his campaign pledge to eliminate capital punishment in his own country.

The resolution passed in a vote of 125-37 with 22 abstensions, but as it has in the past when a proposed death penalty moratorium has come up for a vote at the U.N., the U.S. delegation did not aid its passage.

Robert Dunham, executive director of the Death Penalty Information Center (DPIC), told Newsweek that the U.S. position “becomes especially problematic this year” as the country aligned itself with Iran amid its “use of very public gruesome hanging as a way of attempting to repress social protest.”

At least 18 people have been sentenced to death in Iran for participating in nationwide anti-government protests, according to Amnesty International, and two have been publicly executed so far.

The U.S. vote on the resolution, Dunham told Newsweek, “put us in the same league, with Iran, Iraq, Saudi Arabia… As a country, we pride ourselves on a commitment to human rights and the commitment to the dignity of all individuals. To be aligned with the actions of a country that actively repudiates those values creates a significant problem.”

Austin Sarat, a death penalty expert at Amherst College, wrote at Justia ahead of the vote that “it is time for the United States to join most of the world in rejecting state killing.”

“Doing so would send a strong signal of where he wants to lead the country on this issue and also would lend support to groups working to end the death penalty,” he added, both in the U.S. and abroad.

The vote came two days after Oregon Gov. Kate Brown announced she was dismantling the state’s execution chamber and commuting the sentences of all 17 people on death row to life in prison without parole, saying she made the decision based on her belief that capital punishment is “both dysfunctional and immoral.”

On Friday, the DPIC released its annual review of the death penalty in the U.S., which showed that “seven of the 20 execution attempts were visibly problematic—an astonishing 35%—as a result of executioner incompetence, failures to follow protocols, or defects in the protocols themselves.”

It took three hours for executioners in Alabama to set an IV line when they put Joe James Jr. to death on July 28, subjecting him to “hours of pain and suffering” and meeting “the definition of cruel and unusual punishment,” Maya Foa, director of Reprieve U.S., said at the time.

“Witnesses reported significant problems in all three of Arizona’s executions,” reported the DPIC on Friday, “including the ‘surreal’ spectacle of a possibly innocent man assisting his executioners in finding a vein in which to inject the lethal chemicals.”

The U.S. executed people “with serious mental illness, brain damage, intellectual disability, and strong claims of innocence,” added the group, raising “serious concerns about the application of the death penalty.”

As 44 people remain on federal death row in the U.S. and the Biden administration continues to litigate capital cases like that of Boston Marathon bomber Dzhokhar Tsarnaev, the U.S. government is now being “outpaced” by states like Oregon as well as the majority of the world regarding its death penalty policy, wrote MSNBC opinion columnist Jordan Rubin on Thursday.

“This all raises the question,” wrote Rubin, “of when Biden will deliver on his campaign pledge, if ever.”