“It’s long past time for the EPA to take meaningful action to protect our most imperiled wildlife and put protections in place for endangered species before approving use of toxic pesticides on millions of acres of crops,” said one advocate. 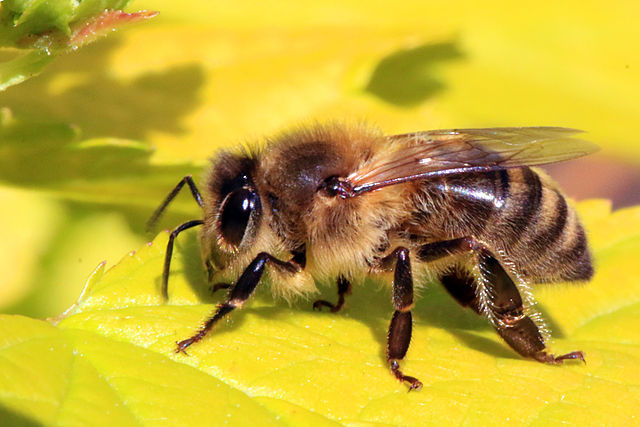 Earthjustice attorney Greg Loarie said on December 21, 2022 that “scientists have long said systemic insecticides like sulfoxaflor are behind the unprecedented colony collapse of the last few years.” Photo: Charlesjsharp/Wikimedia Commons/CC

In a major victory for pollinators and other wildlife, the U.S. Court of Appeals for the 9th Circuit on Wednesday ruled that the U.S. Environmental Protection Agency’s registration of the bee-killing insecticide sulfoxaflor is unlawful.

In response to a legal challenge brought by the Center for Food Safety and the Center for Biological Diversity, the court argued that the EPA’s 2019 decision authorizing the expanded use of sulfoxaflor across more than 200 million acres of pollinator-attractive crops violated the Endangered Species Act (ESA). The court gave the agency 180 days to collect public comment and issue a new decision on the insecticide, which is produced by Corteva, formerly Dow AgroSciences.

“When an agency deliberately ignores Congress’ legislative command, it undermines the will of the people and ultimately our constitutional structure of government,” the court wrote in a strongly worded decision.

By routinely failing to protect endangered species when registering pesticides—thereby forcing the public to sue to obtain protections that should be automatic—EPA is “engaging in a whack-a-mole strategy for complying with the ESA,” the court stated.

Sylvia Wu, a senior attorney at the Center for Food Safety and counsel in the case, said that “for far too long, EPA has bent to the pesticide industry’s desire to get their toxic chemicals to market as quickly as possible.”

“Today the court told EPA, ‘No more: Congress tasked the agency with protecting endangered species and the environment at-large, not just the interests of the pesticide companies,'” Wu added.

EPA originally approved sulfoxaflor in 2013, but thanks to an Earthjustice lawsuit filed on behalf of the Pollinator Stewardship Council and the American Beekeeper Federation, the 9th Circuit vacated that decision. The court ruled at the time that EPA failed to comply with the Federal Insecticide, Fungicide, and Rodenticide Act, which requires all pesticide applications to prove they will not cause “unreasonable adverse effects on the environment.”

“In 2016, EPA re-approved sulfoxaflor subject to significant restrictions to reduce the risk to honeybees and other pollinators,” Earthjustice explained. “But in 2019, and without any public notice, EPA removed these restrictions and approved new uses for the bee-killing insecticide.” In response, Earthjustice once again sued the agency, this time on behalf of the Pollinator Stewardship Council, the American Beekeeping Federation, and commercial beekeeper Jeffrey Anderson.

According to the Center for Food Safety and the Center for Biological Diversity, EPA’s 2019 decision “to expand use of sulfoxaflor on a wide range of crops that attract bees, including soybeans, cotton, strawberries, squash, and citrus… came despite the fact that its own scientists found the insecticide could threaten honeybee colonies and other pollinators,” including the imperiled monarch butterfly.

The EPA also weakened the few spraying restrictions it previously had in place to protect native pollinators and other wildlife, eliminating all requirements for buffers even during aerial spraying.

The EPA admitted to the court that it had not considered any of sulfoxaflor’s effects on species protected by the Endangered Species Act. The agency belatedly issued a draft endangered species assessment earlier this summer. In the draft assessment, the EPA found sulfoxaflor is potentially putting 24 species of insects in jeopardy of extinction, including the Karner blue butterfly and American burying beetle.

Stephanie Parent, a senior attorney at the Center for Biological Diversity and co-counsel on the case, called Wednesday’s ruling “a huge win for monarch butterflies, rusty patched bumblebees, and all the other struggling populations of insects and birds constantly under threat from harmful insecticides.”

“It’s long past time for the EPA to take meaningful action to protect our most imperiled wildlife and put protections in place for endangered species before approving use of toxic pesticides on millions of acres of crops,” said Parent.

Earthjustice attorney Greg Loarie noted that “scientists have long said systemic insecticides like sulfoxaflor are behind the unprecedented colony collapse of the last few years.”

“It makes no sense to allow a bee-killing insecticide on a bee-attractive crop, when we know we need bees for agriculture,” said Loarie. “EPA must protect pollinators from sulfoxaflor, and all other systemic insecticides that end up in pollen and nectar.”

Citing data from the U.S. Department of Agriculture, Earthjustice pointed out that “pollinators’ ecological service in the country is valued at $200 billion a year.”

“More than 80% of plants worldwide need pollinators to survive,” the group continued. “From April 2020 to April 2021, U.S. beekeepers lost 45.5% of their colonies. This is the second-highest loss on record.”

According to Steve Ellis, president of the Pollinator Stewardship Council, “Studies show that the widespread adoption of systemic insecticides has made our landscapes 48 times more deadly for pollinators like honeybees.”

“Pollinators are critical for the country’s food supply,” said Ellis. “EPA must immediately stop pesticides like sulfoxaflor that kill pollinators.”