“The monumental impact of the Fight for $15 is clearly visible in this year’s record wage increases,” said one worker advocate. “While it is encouraging to see boosts… we need federal policy.” 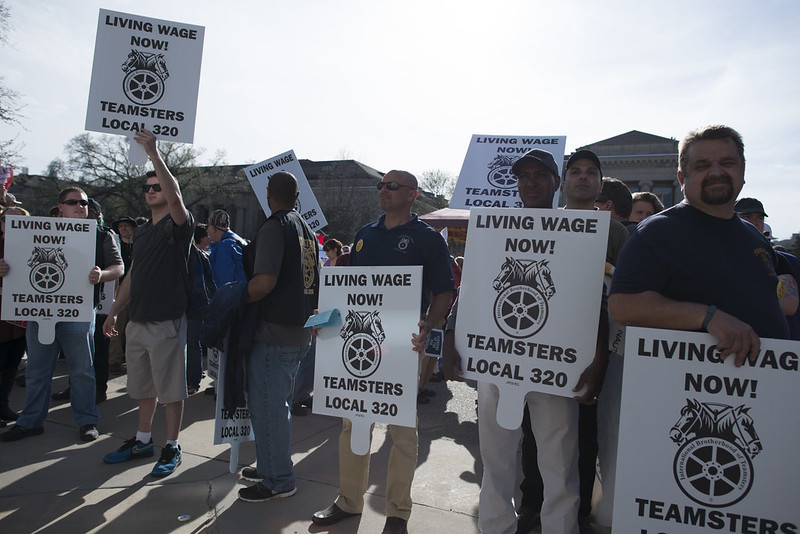 Strike and protest for a $15/hour minimum wage at the University of Minnesota in 2015 Photo: Fibonacci Blue/flickr/CC

After a decade since the launch of the Fight for $15 movement in New York City, a record number of U.S. states and communities are set to raise the minimum wage in the new year.

From New Year’s Eve to New Year’s Day, the minimum wage will increase in 23 states and 41 cities and counties, according to a report released Thursday by the National Employment Law Project (NELP). In 40 of those 64 jurisdictions, it will hit or exceed $15 an hour for at least some workers.

“The raises we are seeing are a true testament to the power of organizing,” said Yannet Lathrop, senior researcher and policy analyst at NELP, in a statement. “These raises were achieved in a variety of ways, from ballot initiatives to statehouses to workers making their demands to employers directly.”

“As these wins continue and we see the real-world impact of higher pay—from growing unionization to narrowing racial wealth gaps—we encourage lawmakers to go further and raise pay broadly across our economy,” Lathrop added.

A record 86 cities, counties, & states are raising wages sometime in 2023. (5 jurisdictions are raising
wages 2x in 2023 & are only counted once in our report.) These raises are a necessary advancement towards a sustaining #MinimumWage ✊

As the report details:

In the 10 years since fast food workers walked out of their jobs demanding a $15 minimum wage and a union, the Fight for $15 worker movement has won minimum wage increases in 28 states and nearly five dozen cities and counties. These victories have led to an estimated $150 billion in additional annual pay for 26 million workers and to the narrowing of the racial wealth gap.
The movement has also put pressure on employers to raise their pay scales, leading… hundreds of businesses, large and small, to raise wages to $15 or more. Among them are corporate giants employing hundreds of thousands of workers from coast to coast, including Amalgamated Bank, Bank of America, Barclays, Best Buy, Charter Communications, Chobani, Chipotle, CVS, Ikea, JP Morgan Chase, LabCorp, Macy’s, MetLife PNC, Sam’s Club, Southwest Airlines, Synchrony Financial, T- Mobile, Target, Under Armour, USAA, Verizon, Walgreen’s, Walmart, and Wells Fargo.

“The monumental impact of the Fight for $15 is clearly visible in this year’s record wage increases as well as those in years past,” said NELP executive director Rebecca Dixon. “But in those same 10 years, congressional action to expand worker rights has been limited.”

“While it is encouraging to see boosts to the minimum wage in cities and states across the country, we need federal policy to address the mounting crises brought about by record increases in the cost of living and pandemic recovery,” she stressed. “We must pass a higher federal minimum wage—at least $15 an hour—that accounts for rising costs of living and ensures that workers have the ability to support themselves and their families.”

In March 2021, eight members of the Democratic caucus, joined all 50 Republicans in the U.S. Senate to kill legislation that would have established a $15 federal minimum wage, lifting millions of people out of poverty. Among those Democrats was Sen. Kyrsten Sinema of Arizona, who officially declared herself an Independent in recent weeks.

State-wide polling conducted shortly before that vote last year showed a majority of Arizonans across the political spectrum in favor of increasing the minimum wage to $15 per hour. In November 2021, the people of Sinema’s hometown of Tucson approved a ballot initiative to raise the minimum wage to $15 an hour in Arizona’s second-largest city.

Plus, in the South, underpaid workers are demanding higher wages & stronger labor standards. @RaiseUptheSouth is organizing workers in the service sector throughout the region #OrganizeTheSouth #UnionsForAll

“In 2023 and 2024, the campaigns to watch include an $18 ballot measure in California and possible ballot measures in Arizona, Ohio, and Michigan,” the publication points out.

“On the legislative front, there may be one fair wage campaigns in Hawaii, Illinois, Massachusetts, and Maryland,” the report adds, “as well as efforts to raise the minimum wage in Maryland (to speed up the state’s implementation of a $15 minimum wage), Massachusetts (where the minimum will reach $15 in 2023 and there are no inflation adjustments planned for following years), and New York (where the demand is $21.25 by 2026-2027).”