“At a time when online mobilizations were one of the few forms of protest available to the public, Twitter was seemingly asked to shield the powerful from criticism,” said one campaigner. “That should worry all those who care about accountability.” 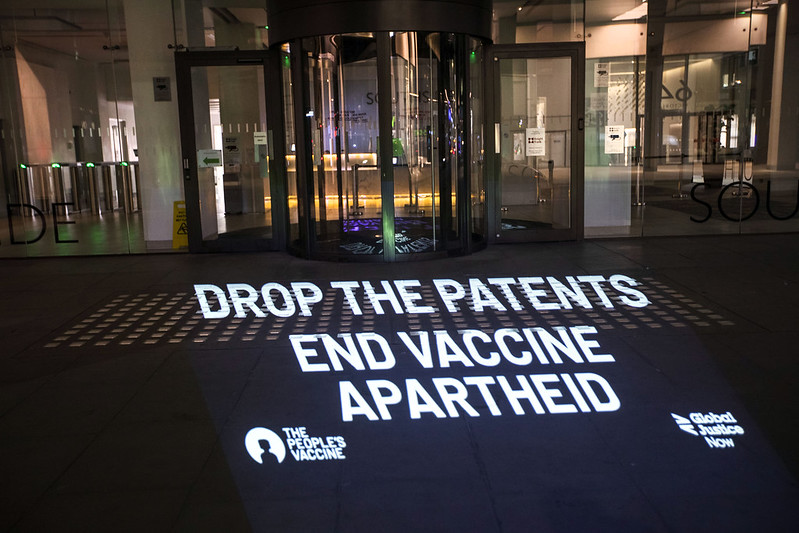 Drugmaker BioNTech and the German government pushed Twitter to “hide” posts by activists calling on Big Pharma to temporarily lift patents on Covid-19 vaccines—a move which would have given people the Global South greater access to the lifesaving inoculations, a report published Monday by The Intercept revealed.

Twitter lobbyist Nina Morschhaeuser “flagged the corporate accounts of Pfizer, BioNTech, Moderna, and AstraZeneca for her colleagues to monitor and shield from activists,” according to The Intercept‘s Lee Fang. An email from Morschhaeuser said the German Federal Office for Information Security also contacted Twitter on behalf of BioNTech, whose spokesperson, Jasmina Alatovic, asked the social media giant to “hide” activist tweets targeting her company’s account for two days.

“The allegations in this article suggest that government and industry tried to silence legitimate criticism during a crisis,” Maaza Seyoum, Global South convener at the People’s Vaccine Alliance, said in a statement Monday. “At a time when online mobilizations were one of the few forms of protest available to the public, Twitter was seemingly asked to shield the powerful from criticism. That should worry all those who care about accountability.”

“To try and stifle digital dissent during a pandemic, when tweets and emails are some of the only forms of protest available to those locked in their homes, is deeply sinister,” he told The Intercept.

It is not clear to what extent Twitter took any action on BioNTech’s request. In response to Morschhaeuser’s inquiry, several Twitter officials chimed in, debating what action could or could not be taken. Su Fern Teo, a member of the company’s safety team, noted that a quick scan of the activist campaign showed nothing that violated the company’s terms of service, and asked for more examples to “get a better sense of the content that may violate our policies.”
But it shows the extent to which pharmaceutical giants engaged in a global lobbying blitz to ensure corporate dominance over the medical products that became central to combating the pandemic. Ultimately, the campaign to share Covid vaccine recipes around the world failed.

While U.S. President Joe Biden in 2021 heeded activists’ calls and joined most of the Global South in backing a Trade-Related Aspects of Intellectual Property Rights (TRIPS) waiver at the World Trade Organization, most rich nations—including Germany—oppose the policy and have, along with Big Pharma, fought to thwart it.

“If the German government wants to show that it is now willing to side with public health over private profit, it must change its approach to pandemic response,” Seyoum asserted. “That means backing efforts at the World Trade Organization to improve access to generic Covid-19 medicines and treatments, supporting the World Health Organization’s mRNA Hub in South Africa, and standing up to corporate interests in negotiations over a Pandemic Treaty.”