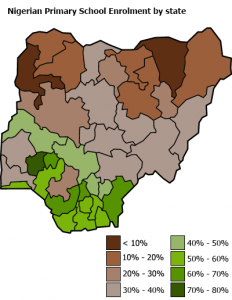 By ClosingTime (Own work) [CC-BY-SA-3.0], via Wikimedia Commons

Their throats were slit, some were shot, and bodies burned to ashes early Tuesday morning, February 25th, in a massacre at the Federal Government College boarding school in Buni Yadi, Yobe, northern Nigeria. Approximately 60 students met their deaths at the hands of an extremist militant group, Boko Haram.

This follows two attacks last week. In one incident, militants destroyed a whole village and shot terrified residents as they tried to escape. Last September, 40 students were killed in an attack similar to this morning’s raid.

Last May, Nigeria’s President Goodluck Jonathan ordered offensive campaigns to bring the violence under control that have been blamed for triggering reprisals by militants against civilians. He defends his decisions and that of his military, saying that the militants have been contained to a small area near the border of neighboring Cameroon.

Since 2009, the group is responsible for the deaths of over 10,000 people and the displacement of over 90,000 civilians attempting to escape the violence the group uses to enforce its views in the regions controlled by Bokko Haram.

Education in Nigeria is more prevalent in the southern cities and population areas of the country. Less than 20% of the population in the north receive education, where these attacks are taking place.

Formally known as the Congregation of the People of Tradition for Proselytism and Jihad, Boko Haram tends to attack schools that teach Nigeria’s national curriculum, which the militants consider to be Western. The group follows an extremely strict version of Islam, including sharia law, and its name means “Western education is sinful” in the northern Hausa language, a report from the BBC said.

Boko Haram supports traditional Islamic education systems that educate only boys and involve teaching prayers and memorization of Quranic texts used in worship. Skills for trades are to be taught by village elders or family members, all male. Women are not educated in this system. Nigeria, in fact, is home to the world’s largest practicing population of indoctrinated FGM (female genitalia mutilation) known today. Researchers and scholars say there is absolutely no scriptural text in any world religion, including Islam, that condones such an atrocity.