Taking a Stand on Our Stolen Land is organized by the Carrizo/Comecrudo Tribe of Texas and Native Voice Network on traditional Esto’k Gna territory. END_OF_DOCUMENT_TOKEN_TO_BE_REPLACED 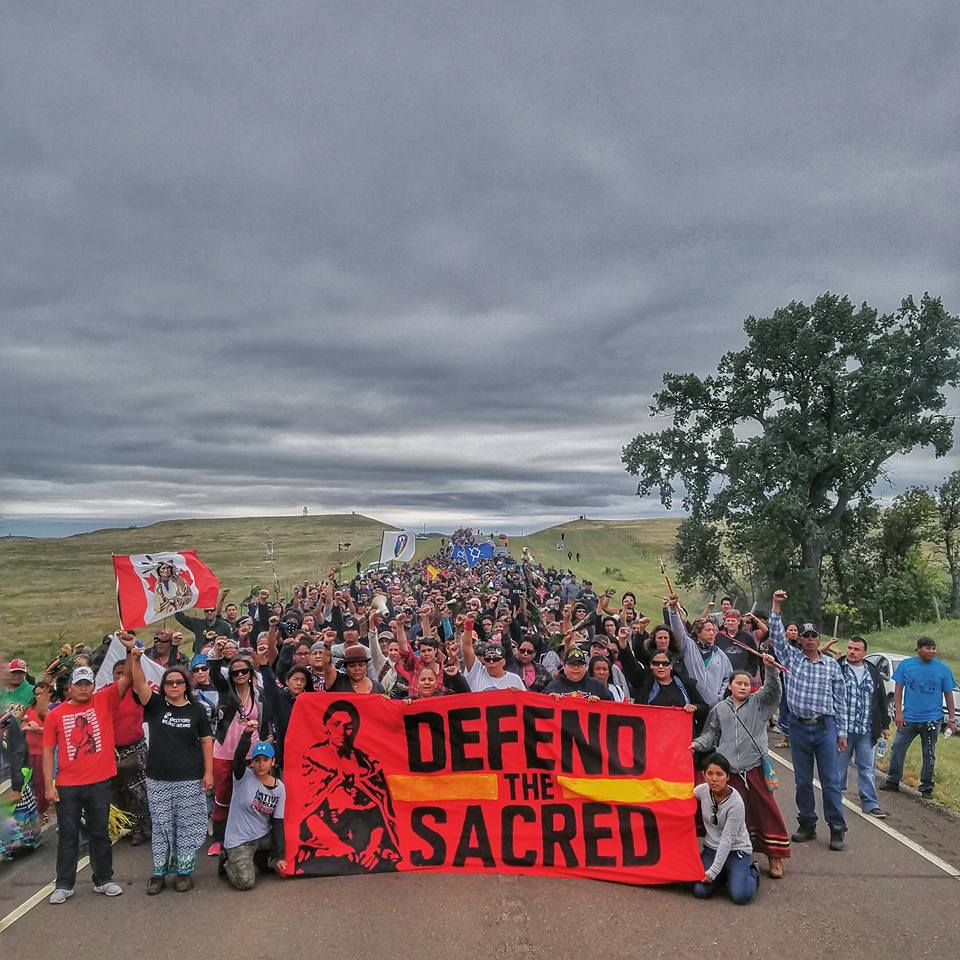 Image via Dallas Goldtooth FB post: In a last ditch attempt to protect burial and prayer sites, North Dakota’s Standing Rock Sioux late Sunday filed for a temporary restraining order to halt construction of the Dakota Access Pipeline, which they say has already caused “irreparable harm” to the sacred plots.

In a last ditch attempt to protect burial and prayer sites, North Dakota’s Standing Rock Sioux late Sunday filed for a temporary restraining order to halt construction of the Dakota Access Pipeline, which they say has already caused “irreparable harm” to the sacred plots.

“They did this on a holiday weekend, one day after we filed court papers identifying these sacred sites,” Archambault added. “The desecration of these ancient places has already caused the Standing Rock Sioux irreparable harm. We’re asking the court to halt this path of destruction.”

The emergency motion came after security forces hired by the pipeline company attacked Indigenous demonstrators with dogs and pepper spray on Saturday.

In a Facebook post on Sunday, tribal member and activist Linda Black Elk said that it’s clear that the pipeline company is trying to “provoke” the peaceful resisters “to violence.”

Just to recap: On Friday, the Standing Rock Nation filed papers challenging Dakota Access permits from the Army Corps of Engineers’… because in a recent survey of the area, the tribe found many incredibly sacred sites, including burial sites, directly in the path of the proposed pipeline. The tribe had never been allowed to survey these areas before, so they hadn’t been able to document these sites.

Today, barely 24 hours after those papers were filed, Dakota Access used bulldozers to destroy those sites. It was absolute destruction. They literally bulldozed the ancestors right out of the ground, along with destroying tipi rings and cairns. They did all of this while assaulting peaceful resistors using vicious dogs, tear gas, and pepper spray.

“There’s only one conclusion,” Black Elk added, “they are attempting to provoke us to violence.”

The ongoing tribal protest against the Dakota Access pipeline has drawn thousands of supporters, including representatives from more than 200 tribes, and garnered increasing media attention. And a federal judge is currently weighing whether construction should be stopped altogether, in response to a complaint filed by the tribe, which argues that the U.S. Army Corps of Engineers approved the project without their consent. That decision is expected by Sept. 9.

“The Tribe has been seeking to vindicate its rights peacefully through the courts. But Dakota Access Pipeline used evidence submitted to the Court as their roadmap for what to bulldoze. That’s just wrong,” said Jan Hasselman, attorney for the Standing Rock Sioux.

“Destroying the Tribe’s sacred places over a holiday weekend, while the judge is considering whether to block the pipeline, shows a flagrant disregard for the legal process,” Hasselman added.

LaDonna Bravebull Allard, historic preservation office for Standing Rock Sioux Tribe’s Section 106, noted in a piece published at YES! Magazine that “Of the 380 archeological sites that face desecration along the entire pipeline route, from North Dakota to Illinois, 26 of them are right here at the confluence of these two rivers,” the Cannonball and the Missouri. “It is a historic trading ground,” Bravebull Allard wrote, “a place held sacred not only by the Sioux Nations, but also the Arikara, the Mandan, and the Northern Cheyenne.”

What’s more, she highlighted how this latest affront is part of a legacy of the U.S. government erasing Indigenous culture through the destruction of their sacred sites.

“The U.S. government is wiping out our most important cultural and spiritual areas. And as it erases our footprint from the world, it erases us as a people,” she continued. “These sites must be protected, or our world will end, it is that simple. Our young people have a right to know who they are. They have a right to language, to culture, to tradition. The way they learn these things is through connection to our lands and our history.”

Finally, she posed the question:  “If we allow an oil company to dig through and destroy our histories, our ancestors, our hearts and souls as a people, is that not genocide?”