That was the subheader for a front page NY Times article of June 5, 1919 reporting that the U.S. Senate had just passed the suffrage amendment bill the day before, joining the U.S. House of Representatives.

The ratification process then began in the states, but it had already gained sufficient momentum to ensure that the amendment would become reality in time to add women to the roll of voters in the next year’s presidential election. 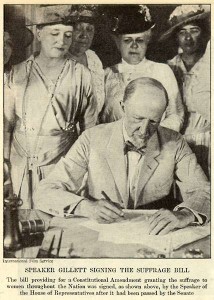 Today we may think that it was about time for this event to happen, although given pre-contemporary communications and our own political foundering right now, it looks like a pretty quick ride from Congress through the two-thirds of states required for ratification. (Never mind that the last state to ratify the amendment long after its official adoption did so in 1984. That’s about 36 years after Mr. Orwell wrote his famous novel titled after the same date, when American women had been voting for nearly three decades. Whether or not there’s any irony to be found in this, it’s a striking juxtaposition.)

But we should remember that it was an even longer haul before June 4, 1919. The process of gaining suffrage had begun with the amendment’s text first drafted by Susan B. Anthony and Elizabeth Cady Stanton, and then introduced to Congress in January 1878. The long haul to successful passage reflects social and cultural changes that we may now take for granted, but which had to happen and still continue to happen in many respects beyond the mere right to vote for both sexes to this day.

A year later and just before women’s participation first began with that year’s presidential election, a NY Times editorial from August 29, 1920 titled The Woman of Thirty asked:

“What is to be the upshot? It is doubtless true that women will divide much as men have done among the several parties. There will be no solid ‘woman vote.’ Having individual opinions and preferences, they will be individually swayed by them in respect to any given political issue or personality. But this is only half of the story. Even the democratic franchise cannot quite unsex either men or women. Hitherto the distinctively feminine instincts and aspirations have centered in winning the right of suffrage; but now that it is won, a vast, united force has been let loose. That political issues and leaders should continue to be merely man-made is inconceivable.”

“It is a fair guess, and indeed a fact already exemplified, that one distinctive interest of the woman politician will be in what is called welfare legislation – the regulation of the conditions of life and of industry with reference to the health and vigor of the nation, for the present and especially for future generations….”

Sometimes, the more things change, the more they seem to stay the same at the core. But we should celebrate today’s momentous change for American women, and celebrate that the core of our hopes and needs has been enlarged, enriched by many more voices to express our common experience.