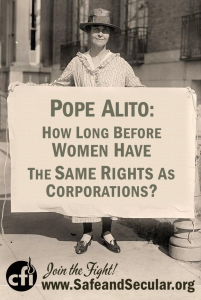 The Supreme Court finished its session on June 30. Historically, the last week of the session seems to be the week that the more awaited and/or controversial decisions are announced, and this session was no exception. And, while there’s a few decisions that we agree with such as Riley v California, where the court ruled that the police needed a warrant to search your cell phone except for under “exigent circumstances,” there’s four decisions that we find alarming.

The first was the NLRB v Noel Canning decision on June 26. This ruling overturned three recess appointments made by President Obama to the National Labor Relations Board on the grounds that the Senate wasn’t really in recess, as they were holding “pro forma” sessions every three days. This may not look so egregious at first glance, but; In Evans v Stephens from 2004, the 11th District Court of Appeals upheld George W. Bush’s recess appointment of Judge William Pryor to a seat on the United States Court of Appeals for the Eleventh Circuit. The court said in that decision:

“The challengers have used both history and textual analysis to support their contentions that the ten- or eleven-day break in the Senate’s Session that underlies Judge Pryor’s appointment was not a “Recess” within the meaning of the Recess Appointments Clause. We have considered all of the arguments. But the arguments are not so strong as to persuade us that [President Bush’s] interpretation is incorrect. […] The Constitution, on its face, does not establish a minimum time that an authorized break in the Senate must last to give legal force to the President’s appointment power under the Recess Appointments Clause. And we do not set the limit today.”

However, the Supreme Court’s decision said that the President can only make recess appointments if the Senate was in recess for ten days or longer. This looks to us as if the Supreme Court itself is writing law, and not judging the legality of said law; precisely what the court should not be doing.

The second, also from June 26, was McCullen v Coakley. This ruling concluded that the 35 foot buffer zone around abortion clinics designed to protect the clients entering and exiting the clinic from unwanted interactions with anti-abortion protesters was a violation of the protesters’ First Amendment rights. What makes this decision so horrifying to us is the history of assaults, both verbal and physical, on women and staff entering the clinics; the women to use constitutionally protected services, and the staff for providing the services. What makes this so ironic is that the Supreme Court itself has no problem with the 100 foot buffer zone around the building they meet in, but we digress…

The other two cases were from the last day of the session. Harris v Quinn deals with public unions; in this case, home care workers in Illinois. A majority, but not all of the workers voted to join a union (SEIU). However, the union is required by Illinois law to negotiate for all employees, and not just those who are union members.The SEIU then negotiated a collective bargaining agreement that went well for the workers, with wages almost doubling, yet the non-union workers objected to a provision in the agreement calling for “agency fees” or “fair-share payments” to reimburse the union for negotiating on their (the non-union workers) behalf.

In 1974, the Supreme Court had ruled in Abood v Detroit Board of Education that workers can be required to pay fees to public-sector unions to cover bargaining costs. However, here the court ruled that the workers who filed suit are not “full-fledged public employees” because they are hired and fired by individual patients and work in private homes, even though they’re paid in part by the state via Medicaid. In the court’s opinion, because they aren’t really state employees, they don’t have to pay union dues. In writing for the majority, Justice Samuel Alito called the Abood precedent “questionable” and “anomalous”, thereby almost guaranteeing further challenges in the future. The implications for unions are frightening, as this sets precedence for non-union members to receive all the benefits without contributing, thereby reducing the union’s power to negotiate as they won’t have the financial resources.

Finally, we have Burwell v Hobby Lobby Stores Inc. This one’s fairly known; how Hobby Lobby claims that paying for four certain forms of birth control for their women employees as required by the Affordable Care Act violates the owners’ religious beliefs, as they believe them to be abortifacients. Now, to be fair to Hobby Lobby, they do provide sixteen other forms of birth control at no charge. However, their religious beliefs are questionable in this case.

Hobby Lobby claimed that providing coverage for Plan B and Ella (two of the four contraceptives named in the suit- the other two are IUD devices) substantially limits its religious freedom. However, up until the point where they decided to file suit back in 2012, those two contraceptives were covered under their health insurance plan. Furthermore, as of 2012, Hobby Lobby’s 401(k) employee retirement plan had more than $73 million in mutual funds with investments in companies that produce emergency contraceptive pills, intrauterine devices, and drugs commonly used in abortions, including those companies who make Plan B, Ella and the IUDs that Hobby Lobby says they morally object to.

So, faced with Hobby Lobby’s rank hypocrisy, the testimony by the government and 10 medical groups headed by the American College of Obstetricians and Gynecologists that the drugs in question were not abortifacients, and their claim that corporations have religious beliefs, how did the Supreme Court rule? They ruled in favor of Hobby Lobby, of course. In a 5-4 decision along purely ideological lines, the court ruled that closely held for-profit businesses could assert a religious objection to the Obama administration’s regulations.

Justice Ruth Bader Ginsberg wrote a blistering 35 page dissenting opinion, saying among other things that the court “ventured into a minefield.” She also stated; “In a decision of startling breadth, the Court holds that commercial enterprises, including corporations, along with partnerships and sole proprietorships, can opt out of any law (saving only tax laws) they judge incompatible with their sincerely held religious beliefs.”

We can’t help but wonder what church a corporation attends. What’s its denomination? We’d really like to attend a corporation’s baptism – preferably on the ocean or a deep lake, and we get to do the baptizing. But, again we digress.

Occupy World Writes is saddened and outraged by what’s happened to the Supreme Court over the last decade or so. These four decisions show what a travesty and sham the Supreme Court’s become. It’s gone from supposedly being politically neutral and ruling only on legality to being a corporate pawn that makes laws as much as interprets them, and their rulings against protecting a woman’s right to choose what she can do with her own body are reprehensible. Is it any wonder that the public’s confidence in the Supreme Court’s fallen to an all time low?