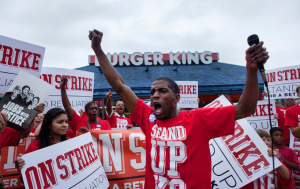 Thousands of workers in several different low-pay industries—including fast food, airlines, and health care—staged protests throughout the country on Thursday to demand a $15 an hour minimum wage, improved benefits, and collective bargaining rights, marking the two-year anniversary of the movement that has come to be known as the Fight for 15.

Others told personal stories of working at McDonald’s for years and only ever receiving raises of five or ten cents at a time.

“I’ve been working at McDonald’s for 22 years and I’m still making poverty wages,” a worker named Tyree called into a megaphone at the Chicago rally.

Another man named Ronnie shared that he had recently been hospitalized for stress after working two jobs to make ends meet. 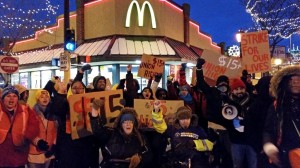 In New York, another McDonald’s employee named Flavia Cabral told a rally that as the sole breadwinner for her family, who live in the Bronx, she split her time between the fast food restaurant and a shipping company in Manhattan.

“I’m the one who feeds my family, and even working two jobs, it’s not enough,” Cabral toldthe crowd, adding that the protesters were committed to seeing their demands met.

In addition to fast food and health care workers, contractors joined in the strikes, including those who work in federal buildings like the Capitol and the Pentagon, as well as the Smithsonian Museum and Union Station.

“We deserve more,” one organizing group wrote in a statement. “Our bosses pay us poverty pages, while we work hard every day to make them millions. It’s not right.” 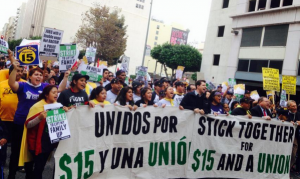 Tens of thousands of airport workers also joined in the protests, writing a letter to the executives of American Airlines, Delta, Southwest, United Airlines, JetBlue, and Alaska Airlines that they “pledged to stand together” with protesters from other industries. About 40,000 airline workers were expected to join in the strike.

Efforts to institute higher wages have seen fruitful returns in San Francisco and Seattle, where city governments voted to make the full jump to $15; in other cities, like Washington, D.C., plans are underway to raise the minimum wage to $11.50 by 2016, while Chicago will see theirs at $13 by 2019. And President Barack Obama in February signed an executive order that would raise contractors’ wages to $10.10.

But none of the fast food chains that were specifically called on by the protesters to raise wages have committed to the demands; in fact, as one man pointed out at the Chicago rally, the owner of the McDonald’s targeted by workers on Thursday had lobbied aldermen in the area not to vote to increase minimum wage in the city. In 2013, the average pay for restaurant workers was $8.74 an hour.

“When they were planning to strike and ask for $15 an hour in 2012, people thought they were crazy,” said organizer Kendall Fells. “Two years later, it doesn’t sound so crazy.”