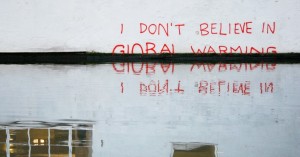 Graffiti on a wall by London’s Regent’s Canal is believed to by an ironic work of art by acclaimed street artist Banksy.

So we’re in the midst of another round of climate-change related mud slinging. The latest issue of National Geographic, “The War on Science”, was seen to sneer at the 130 million American who don’t believe in human induced climate change. The Washington Times‘ Stephen Moore fired back with an emotional op-ed titled “The Myth of Settled Science,” and to go by the pundits and the comment threads, people on both sides are tearing their hair out, utterly sick of what they see as their opponents’ brainwashed, dangerous nonsense.

I get it. I feel it. But there are quieter moments when I just want to understand what’s really going on. It’s all too easy to fall into the trap of thinking all of those 130 million people who question the evidence must, at this point in the game, be either willfully uninformed or just stupid, but I know the real stupidity is in thinking that can be the case. So instead of presuming fault or failure, how does this debate look if we assume they are logical, have integrity, and are smart?

Here are two explanations for climate denialism that seem to me to hold water.

One thing that has been particularly confusing is how the political right managed to convince conservative Christians to reject so much evidence about the wholesale disrespect for, and destruction of, God’s glorious creation.  It seems to me that at least some of the answer for this lies in confusion, on both sides, between the idea of science as a method, and what the theologian Huston Smith calls “scientism.”

The scientific method, in this context, is a process for studying reality made up of matter and energy. That’s what it does, and that’s all it does. Which is an immense and never-ending task, of course, but it is still contained within the box of objective physical reality. This why it can get no further back than the Big Bang. As the astrophysics David Schramm put it, “The universe did not necessarily begin with the big bang . . . Our universe, however, did, since we can obtain no information about the events that occurred before it.” Put another way, the absence of evidence is not evidence of absence. The scientific method has nothing to offer reality that is not material or objective. It has nothing to say about values, in their final and proper sense (the very pursuit of knowledge, for example, is a value we’ve long assumed that is not, in fact, scientifically derived), or life meaning, and it is strictly mute on concepts of God.

Scientism, on the other hand, says that because matter and energy are all that the scientific method can measure, that’s all there can be. Absence of evidence is evidence of absence. This leads to the basic premise that we, with our tools of perception and level of consciousness, are able to find all the answers and understand everything.

One is a method of investigation, the other is about as deep an ontological statement as can be.  One is mute on questions of God, the other denies, even derides the very idea.

At the foghorn level of public debate all nuance is lost, of course, which is how this descends into a battle between Science in the one corner, and Religion in the other. And the fires have been stoked in this way for so long that both sides feel the debate is now a profound battle for Truth, which is the worst possible frame for finding common ground.  We will never be able to work together if Absolute Truth is what we are fighting over, because none of us has access to it. Simply by virtue of being human, we all rely on a subjective mish-mash of experience, social influences, philosophy, theology, politics etc. It is the greatest unsettled, and objectively unsettle-able theme in all of human history. The sun will die and obliterate the Earth before we agree.

The liberal left, with our uber-rationalist instincts, activate this frame every time we say something like, “Well, Science says… .” The National Geographic piece is a good example of this, and it’s nonsense.  Science can’t speak, any more than cooking, or philosophy, or practicing the piano can speak. It is a method. Only evidence speaks. I know that’s what is meant in many cases, but the shorthand has been allowed to assume an ideological identity in its own right, easily – and sometimes correctly – heard as God-mocking Scientism. The minute you activate this frame, you hand power to the small number of rabid extremists who are genuinely uninterested in anything but their own image, wealth and power and will happily bully and deceive to get their way.

And the conservative Christian right has all too often bought into the simplistic hype that everyone who talks about the evidence of climate change must represent scientism on the march; an army of cold hearted atheists, spitting on their experience of reality beyond the material. When really, most of us, in my long experience, are not interested in presenting the scientific method as an all-knowing ontological force, nor would we countenance such disrespect. False battle-lines all over the map.

If we assume that we share the intention to live honestly and be guided by love and empathy, we are freed from the toxic rivers of anger and recrimination. We can acknowledge this shared intent, agree what we’re talking about – a specific set of objective evidence – and leave the ontological debate for another time.

OK, that might help me understand the instinct of some well-intentioned conservative Christians, but what’s driving the good people of the political right?

For this, the most compelling theories come from two sources. The first is Naomi Klein. I think she has it right when she says, in her recent book This Changes Everything that the right, far from being slow and regressive, were actually a lot quicker off the mark than the left. They recognized from the get-go that climate change presents a wholesale challenge to what they believe to be the most positive economic system ever created: capitalism. If you believe it is a deeply positive force, then it makes perfect sense that you respond to a threat to capitalism as a threat to human progress and wellbeing.

That could account for an initial instinct, but surely not a long-term strategy. At some point it becomes self-defeating, right?

The next piece of the puzzle comes from the economist Philip. E. Mirowski. He suggests – pretty convincingly, to my ears – that the right has a perfectly coherent strategy for mitigating the threat of climate change, and it isn’t just to ignore it so they can keep hoarding wealth while everyone else suffers, like so many Scrooge McDucks.

Stage One is to deny and cast doubt on the evidence. The thing to acknowledge about this is that it is a delaying tactic, not a statement of belief. It’s based on the logic that if the threat is widely perceived too quickly, the most likely outcome is a knee-jerk response driven by panic and irrationality that could very well destroy all the good with the bad. Doctors would call this an iatrogenic effect – when the medicine causes more harm than the original disease.

Stage Two, once outright denial starts to lose its power, is to promote tepid market-based ‘solutions,’ like Cap and Trade, or the United Nation’s REDD program, which aims to put a market price on rainforests, grasslands and the like, ostensibly to protect them. Again, these aren’t believed to be full solutions, but they are useful for three reasons. Firstly, they promote the idea of ‘free market’ capitalism as a guiding economic model, so are both good long-term strategic messages, and easy to rally the broad tent of Right, and even plenty of left-of center players (many large NGOs, like WWF, actively support UN REDD). Secondly, they may actually help slow the onset of the threat; plenty of studies and a certain type of intuitive logic can be called on to validate this claim. And thirdly, and most importantly, it buys more time.

Stage Three is when the real solution comes in to play: unleash the full power of market-driven technology on the problem. Specifically, geo-engineering. We needed Stages One and Two because of the time needed for this to become even remotely viable. We’re talking about technologies capable of re-balancing the entire Earth’s atmosphere; things like reflective aerosols in the atmosphere; modifying weather patterns through cloud seeding; and even building a giant sunshade in space. These things still sound quite a way out there to most, and none is proven at scale, which is why none is being actively championed just yet, but you can either see that as that there are no such solutions, or that there are no such solutions yet.

Agree or disagree with the thinking all you like (I certainly find it cut-through with inconsistencies and logical holes), but consider for a moment how smart it is. For a start, it’s wrapped in a more sophisticated analysis not just of facts and figures, but social and political psychology, than anything the left has managed. We’re still only now, and slowly, learning that doomsday scenarios are not a reliable motivator. It also works with the values and machinery of the economic system they subscribe to: materialism, market forces, and technological innovation. And finally, it is actually a rather elegant and complete long-term strategy. Again, something the left has yet to get together on. We’re essentially still relying on brute rationalism to win the day. And we’re losing. Or, at best and on a hopeful day, not winning anywhere close to fast enough.

If this is the strategy – which is a big if, but assuming it is roughly in the right area – then it isn’t the “give us everything and damn the rest of you” horror show of the caricatures. And that means there is space in there for common ground, if only, to begin with, on the most basic idea that we must find the best way to protect this planet and the life on it.

From there I can say, free from anger and hopefully in tones that allow me to be heard by the good people on the other side, I respect your beliefs and I share your intent. We agree this world is precious, and life everywhere matters. That, to me, sounds like an important step closer to being able to work together than, “I think you are brainwashed and dangerous.”

About the Author: Martin Kirk is Head of Strategy for /The Rules, a global network of activists, organizers, designers, researchers and writers dedicated to changing the rules that create inequality and poverty around the world.