As the conflict in Turkey spirals out of control, dozens of people have reportedly been killed in Cizre and the army shows no signs of lifting the siege.

Written by Joris Leverink. Published by ROAR on Friday, September 11, 2015. 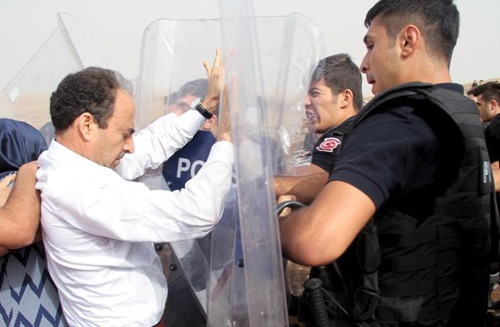 Tanks shelling the city center. No-one allowed in or out. Electricity and water have been cut, as well as phone lines and internet access. The people have dug trenches to stop armored vehicles from entering their neighborhoods and have hung sheets in the streets to prevent being seen and shot by snipers.

While the above reads as a report from Kobane, from when the Syrian town was still under attack from the so-called Islamic State (IS), it is in fact a description of the current situation in Cizre, a predominantly Kurdish town in southern Turkey.

Since the Turkish government imposed a curfew in Cizre last week, its citizens have been forced to remain indoors, risking being shot by snipers as soon as they step out. The city is under total lock down, which means that for at least a week people have had no access to fresh food or water, medical services, or anything else for that matter. Even the wounded are not allowed to be transported to the hospitals, as a result of which a number of civilians have died from non-lethal injuries due to blood loss and infections, among them a baby of less than two months old.

Due to limited phone and internet access in Cizre news from the besieged town reaches the outside world only piecemeal, meaning that reports of what is going on inside the town are difficult to confirm – a very worrying sign in and of itself.

In order to break the siege – and the silence – the co-leader of the pro-Kurdish Peoples’ Democratic Party (HDP) Selahattin Demirtaş has been leading a march in an attempt to reach the town on foot. At several instances this march was blocked by the police upon orders of the Minister of Interior Selami Altinok of the ruling Justice and Development Party (AKP) who has argued that the HDP lawmakers are not allowed to enter the town “for their own security.”

While trying to circumvent the police blockades on the roads leading into town by following small trails through the fields and mountains, the HDP co-leader suggested that Cizre was being punished for voting “84 percent for the HDP” during the last elections in June. Demirtaş called Cizre “Turkey’s Kobane”, comparing the plight of the town and the resistance of its citizens to the Syrian Kurdish town when it was under attack from IS.

“In Cizre, 120,000 people have been held hostage by the state for a week,” he added. “They put ice on the corpses to stop them putrefying, because burials are banned.”

One of the most heart-breaking stories spoke of the young girl Cemile Çağırga, who was reportedly shot by the police in front of her house – under what circumstances remains unknown. After succumbing to her injuries her family was unable to transfer her body to the morgue due to the curfew and the threat of being targeted by snipers and artillery. For several days Cemile’s body was kept in a fridge in the family’s home before the young girl could be buried.

Violence spiraling out of control

The siege of Cizre occurs at a time when the recent upsurge in violence in the country’s southeastern Kurdish region appears to be spiraling out of control. An ambush by the Kurdish guerrillas of the PKK on a military convoy left at least 16 soldiers dead – or so the state media reported – followed two days later by another deadly attack on a police van, killing another 11 officers.

In response to these attacks nationalist groups around the country took to the streets en masse. In many cases these marches started as protests to show their indignation and anger, but they quickly turned into lynch-mobs targeting Kurdish neighborhoods, shops and individuals. A nationalist mob marching through a downtown Istanbul neighborhood was heard chanting “We don’t want a [military] operation, we want a massacre!”

Offices of the HDP were a popular target of the masses brandishing Turkish flags, hands held high up in the air making the “sign of the wolf” – a gesture emblematic of an ultra-nationalist organization called the Grey Wolves, which has been accused of countless racist and xenophobic attacks on Armenians, Kurds, Syrians and even Pope John Paul II. After two nights of attacks around 130 of the party’s offices were left destroyed or burned, windows broken and party signs torn down or covered with Turkish flags.

The HDP is perceived by many nationalist Turks as the political wing of the PKK, and as such as a terrorist organization in and of itself. The party’s historical success in the June elections, when it collected an unprecedented 13 percent of the vote and was able to send 80 delegates to the national parliament – the very first time a pro-Kurdish party entered Turkish parliament in the country’s history – angered many nationalists and AKP supporters alike.

Nationalists – represented in parliament by the Nationalist Movement Party (MHP) – fretted about seeing what they perceived as “Kurdish terrorists” inside the parliament; and AKP supporters saw their dream of Erdogan being installed as the 21st century Sultan shattered when the party lost its absolute majority.

Both parties have reasons aplenty to be wary of HDP’s success. Another Kurdish victory in the upcoming November elections would seriously curb their aspirations to see their respective dreams of a Turkish utopia come to pass: an ethnically-pure country free of Armenians, Kurds, Greeks and Arabs in the case of the MHP; and a revived sultanate under the “auspicious” leadership of Erdogan in the case of the AKP.

The upsurge of violence in the east should be analyzed in light of the national elections of November. Plunging the country into war immediately after the coalition talks have broken down serves two purposes. First, it attempts to show that without the AKP at the wheel, the country is ‘doomed to disintegrate into chaos and violence’. Second, the escalation of violence is encouraged because of the belief that in times of crises people turn towards a strong leader who promises to restore peace and tranquillity — if only the people would grant him exceptional powers to do so.

A cry for solidarity

And while the party leaders cook up their plans to restore their power, its once again the ordinary people that suffer most; the mother who was shot by a sniper while holding her new-born baby in her arms; the young boy who got bored of sitting indoors days on end and decided to sneak outside for a quick peak, and got shot; the seven children who had to cover their mother’s dead body with bottles of frozen water to stop the body from decomposing because she couldn’t be buried after she was shot to death.

The siege of Cizre continues in a blatant violation of all morals and values that are supposed to determine the actions of a “democratic country.” It is outrageous that Turkey, especially as a NATO-member state, is allowed to target its own citizens, torturing them collectively in the name of ‘securitization’ and ‘fighting terrorism’.

In the case of Kobane the collective outcry of the international solidarity movement made the city’s plight impossible to be ignored. Let’s draw our lessons from this experience and raise our voices in solidarity with the people of Cizre, Silopi, Sirnak, Yüksekova, Sur and all those other towns, neighborhoods and villages that are being punished for demanding freedom, tortured for refusing to give in, arrested for simply being Kurdish and shot on the streets for daring to venture out of their homes.

Cizre is not alone, and it’s about time we’d let the world know.

Joris Leverink is an Istanbul-based freelance journalist, editor for ROAR Magazine and columnist for TeleSUR English.