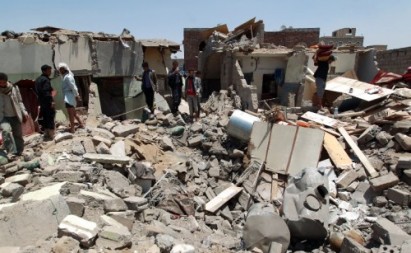 A hospital associated with Doctors Without Borders. A school. A potato chip factory. Under international law, those facilities in Yemen are not legitimate military targets. Yet all were bombed in recent days by warplanes belonging to a coalition led by Saudi Arabia, killing more than 40 civilians.

The United States is complicit in this carnage. It has enabled the coalition in many ways, including selling arms to the Saudis to mollify them after the nuclear deal with Iran. Congress should put the arms sales on hold and President Obama should quietly inform Riyadh that the United States will withdraw crucial assistance if the Saudis do not stop targeting civilians and agree to negotiate peace.

As Common Dreams has reported since the Saudi-led and U.S.-backed assault began early in 2015, the civilian population has faced devastating violence and, already one of the poorest countries on earth, an increasingly dire humanitarian crisis threatening tens of millions.

This spring, a report by Human Rights Watch cataloged how American weapons supplied to the Saudis were used in many attacks that resulted in civilian deaths and injuries.

Despite such warnings, the U.S. has continued to back Saudi Arabia in its military campaign. As the Times notes, “Although many experts believe the threat to be overstated, Mr. Obama agreed to support the Yemen intervention — without formal authorization from Congress — and sell the Saudis even more weapons in part to appease Riyadh’s anger over the Iran nuclear deal. All told, since taking office, Mr. Obama has sold the Saudis $110 billion in arms, including Apache helicopters and missiles.”

Amid news that ten children were killed by the U.S.-supported airstrike over the weekend, Common Dreams reported how some congressional Democrats, led by Sen. Chris Murphy of Connecticut, have challenged the arms sale to Saudis proposed by the Obama administration.

“If you talk to Yemeni Americans, they will tell you in Yemen this isn’t a Saudi bombing campaign, it’s a U.S. bombing campaign,” Murphy said in June. “Every single civilian death inside Yemen is attributable to the United States.”

And after a hospital supported by the international aid agency Medicine Sans Frontier (Doctors Without Borders/MSF) was bombed by coalition forces on Tuesday, the fourth such incident over the last year, the group issued its latest call for the attacks on civilians to end.

“After each attack MSF receives reassurances from the actors in the conflict with promises that this will not happen again,” said Teresa Sancristóval, MSF emergency program manager. “We do not want words, courtesies, promises which go undelivered. What we need to see is proof of intent and a commitment that there will be no more airstrikes on medical facilities, staff and patients.”

As the MSF had given coalition forces precise coordinates of its facilities so that they would not be targeted, the Times editorial argues there can only be “one of two unpleasant” reasons for Tuesday’s attack. “One is that the Saudis and their coalition of mostly Sunni Arab partners have yet to learn how to identify permissible military targets,” it reads. “The other is that they simply do not care about killing innocent civilians.”

In a separate incident on Tuesday, an estimated seventeen civilians were also killed in the capital city of Sanaa.

Given the death and destruction in the country, the Times concludes that “further American support for this war is indefensible.”

And as HRW’s Motaparthy said earlier this year, either the U.S. “should pull the plug on arms to the Saudis or further share responsibility for civilian lives lost.”