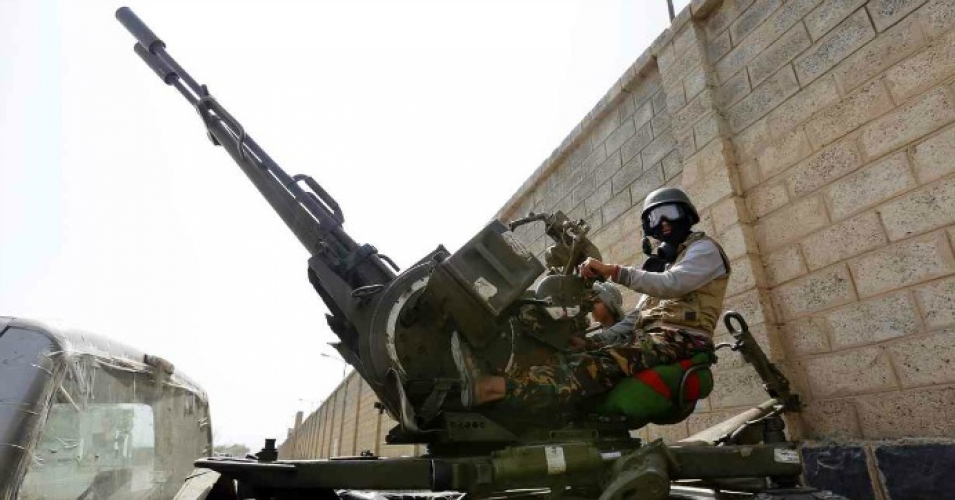 A Houthi militiaman with a heavy caliber machine gun. Saudi Arabia has received US support for air strikes against the fighters. (Photo: Yahya Arhab/EPA)

In this strategy memo on why progressive Democrats and Empire-skeptic Republicans should do what they reasonably can to assist efforts to block the recently proposed Saudi arms deal, I will cover four points.

On August 9, the Administration notified Congress of a plan to sell a bunch of tanks and armored vehicles to Saudi Arabia. Congress has 30 days to try to block the sale. Ordinarily, Congress never blocks or even tries to block an arms sale. The notification happens and nobody pays it any mind. But this one is special, because it’s perceived as a proxy for continued US participation in the Saudi war in Yemen, which has brought about a total humanitarian catastrophe. Republican Senator Rand Paul has announced that he will work with a bipartisan coalition in the Senate and House to block the sale. Oxfam and other human rights groups oppose the arms sale. Just Foreign Policy’s petition to Congress against the arms sale is here.

Why this is a winnable fight:

Foreign Policy handicaps efforts to block the sale as “an uphill battle,” because the main beneficiary is General Dynamics, which FP says has big clout on the Hill.

However, FP neglects the fact that two months ago, we had a very similar fight on the House floor and almost won, on an amendment to block the transfer of US-produced (Textron) cluster bombs to Saudi Arabia. The vote on the Conyers-Ellison-Grijalva-Lieu-McGovern-Johnson-Lee Amendment was 204-216. All but 16 House Democrats voted yes. 40 Republicans, including many Liberty Caucus members, also voted yes. The amendment was supported by Amnesty International, Human Rights Watch, and the US Conference of Catholic Bishops.

Why blocking/trying to block the Saudi arms deal is in the broad interests of humanity:

In this particular case, it’s plausible that if we can block the Saudi arms sale, or even come close and have a robust public food fight about it, we can help end the catastrophic Yemen war.

From the FP piece:

Human rights groups, by contrast, say the move sends the wrong message to Saudi Arabia.”The international community must go ‘all in’ on a peace agreement,” said Scott Paul, a senior policy adviser at Oxfam America. “A sale of major arms to Saudi Arabia signals the opposite — that the U.S. is instead all-in on a senseless war that has created one of the world’s largest humanitarian emergencies.”

Blocking the arms sale would send the right message.

4. How blocking the Saudi arms deal could help us block lame duck TPP:

Obama is using two arguments for passing TPP [the proposed corporate power-grabbing Trans-Pacific Partnership Agreement] in a lame duck session of Congress after the election that overlap with arguments it will likely make if pressed on the Saudi arms deal:

B. Obama is still President. Obama, not Hillary Clinton, will be President until January 20.

A. Even if you don’t buy claims that the TPP will benefit the US economically, Admin argues, TPP is a foreign policy-national security thing. It’s about pivot to Asia, containing China, US leadership in Asia, blah blah. If Congress doesn’t give Obama the TPP, it will unnerve our allies in Asia, who will wonder about the U.S. commitment to Asia and it will embolden China to run amok, blah blah.

Similarly, to discourage Members of Congress from opposing the Saudi arms deal, Admin will likely say: even if you don’t think this arms deal is a great idea, even if you don’t think the Saudi war in Yemen is a great thing for the US to participate in, if Congress blocks this arms deal, it will cause key U.S. Middle East ally Saudi Arabia to doubt the US commitment to its allies in the Middle East, blah blah.

B. One of the things Obama needs to do to win TPP in a lame duck is to get some group of House Democrats to act according to the belief that lame duck TPP is an Obama loyalty test. This isn’t just a question of who votes yes or no in the endgame. It’s also a question of how forceful people who are eventually going to vote no are in their public opposition prior to a vote. Elijah Cummings will vote no on the TPP if it comes to a vote on the House floor. Yet, as chair of the Democratic Platform drafting committee, he rejected the idea that the Platform should explicitly oppose the TPP, on the grounds that he wasn’t going to undermine the President in his last six months in office.

If we beat Obama in the House on the Saudi arms sale, the most likely way we win is like the cluster bomb vote: almost all Democrats and 40-50 Republicans. In other words, in rough measure, a lot like a House TPP vote.

So, if we beat Obama in the House on the Saudi arms sale, the message is: Obama is still President, but that doesn’t matter nearly as much to House Democrats anymore as he wants it to matter.

And that would be a sharp psychological warfare blow in September against the idea of lame duck TPP.

You can urge your representatives in Congress to oppose the Saudi arms deal here.

Robert Naiman is Policy Director at Just Foreign Policy. Naiman has worked as a policy analyst and researcher at the Center for Economic and Policy Research and Public Citizen’s Global Trade Watch. He has masters degrees in economics and mathematics from the University of Illinois and has studied and worked in the Middle East. You can contact him here.