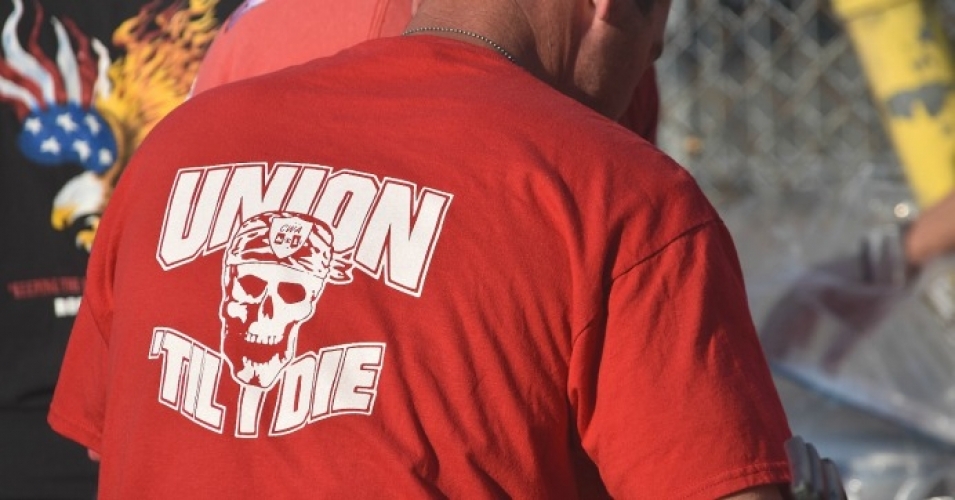 The decline of organized labor in the United States has contributed significantly to wage stagnation and rising inequality, according to a new report released Tuesday by the Economic Policy Institute (EPI).

The analysis finds that as the share of private-sector workers in a union has fallen precipitously—from one in three in the 1950s to about one in 20 today—wage inequality has risen as a result. In particular, EPI states that the labor movement’s decline has contributed to wage losses among workers who don’t even belong to a union, which “translates into
millions of lost dollars to American workers.”

“Union decline has exacerbated wage inequality in the United States by dampening the pay of non-union workers as well as by eroding the share of workers directly benefiting from unionization,” reads the EPI report. “Rebuilding our system of collective bargaining is an important tool available for fueling wage growth for both low- and middle-wage workers and ending the era of persistent wage stagnation.

The paper notes that several culprits have been blamed for the fact that pay for private-sector workers has “barely budged over the past three and a half decades”—including globalization, technological change, and the slowdown in Americans’ educational attainment.

“Each of these accounts describes important developments contributing to pay stagnation and pay decline for certain groups of workers,” EPI acknowledges. “Yet these explanations ignore a vital contributing factor: the near disappearance of a worker institution that once claimed over one-third of private-sector employees as members.”

In fact, the think tank found that if union membership rates were as high today as they were in 1979, men who aren’t in a union would make five percent, or about $2,700 more, per year. For less educated men, the decline is even more impactful; non-union men without a bachelor’s degree would have made $3,016 more in 2013―an 8 percent increase―under 1979 levels of union membership.

(The report notes that the impact for women is “not as substantial because women were not as unionized as men were in 1979″—but nor is it inconsequential: For 32.9 million full-time non-union women working in the private sector, annual pay would be roughly $24.0 billion more per year if unions had remained as strong as they were in 1979.)

“In the year of a presidential election characterized by populist discontent, the report’s findings are fresh ammunition for progressives who maintain that strengthening unions, rather than, say, closing our borders to immigrants, is the key to restoring broad wage growth and stemming income inequality,” reporter Daniel Marens wrote at the Huffington Post.

“Many American workers can see those unions as either minor bit players in today’s economy or good for union members alone to the detriment of society at large,” study co-author Jake Rosenfeld, a sociologist at Washington University in St. Louis, told the HuffPo. “This is a study that says that’s wrong: unions are good for members and non-members alike.”

Indeed, as Hamilton Nolan wrote in his analysis of the EPI report at Deadspin: “Don’t get mad at foreigners. Unionize. It’s the only battle in the class war that lies entirely within your power to win.”