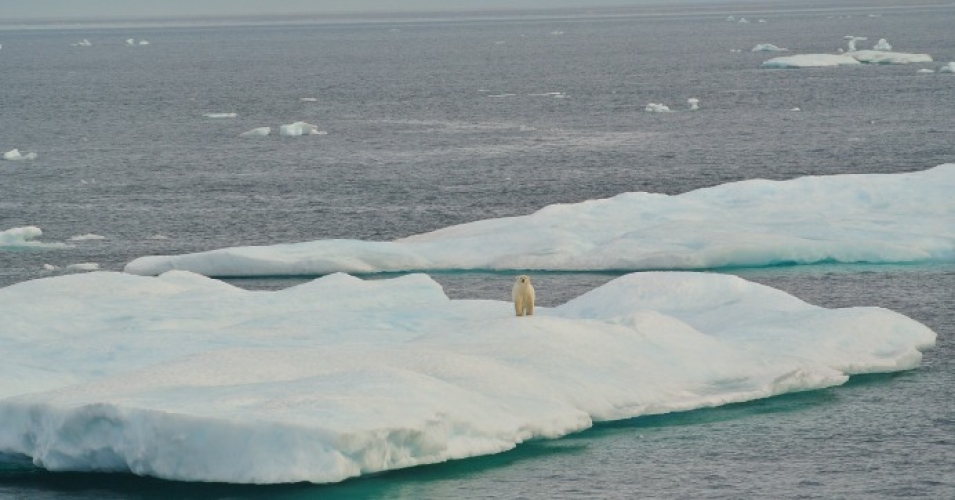 If President-elect Donald Trump’s appointments of a “band of climate conspiracy theorists” weren’t already stoking fears for the ever-warming planet, the latest Arctic Report Card from the National Oceanic and Atmospheric Administration (NOAA) may well provide the ignition.

The annual assessment, released Wednesday, finds that “persistent warming” is driving “extensive changes” to the region. In fact, the average air temperatures were “unprecedented”—the highest on observational record—and “Arctic temperatures continue to increase at double the rate of the global temperature increase,” NOAA states.

“Rarely have we seen the Arctic show a clearer, stronger, or more pronounced signal of persistent warming and its cascading effects on the environment than this year,” said Jeremy Mathis, director of NOAA’s Arctic Research Program. “While the science is becoming clearer, we need to improve and extend sustained observations of the Arctic that can inform sound decisions on environmental health and food security as well as emerging opportunities for commerce,” he added.

The report’s main findings, as noted by NOAA: 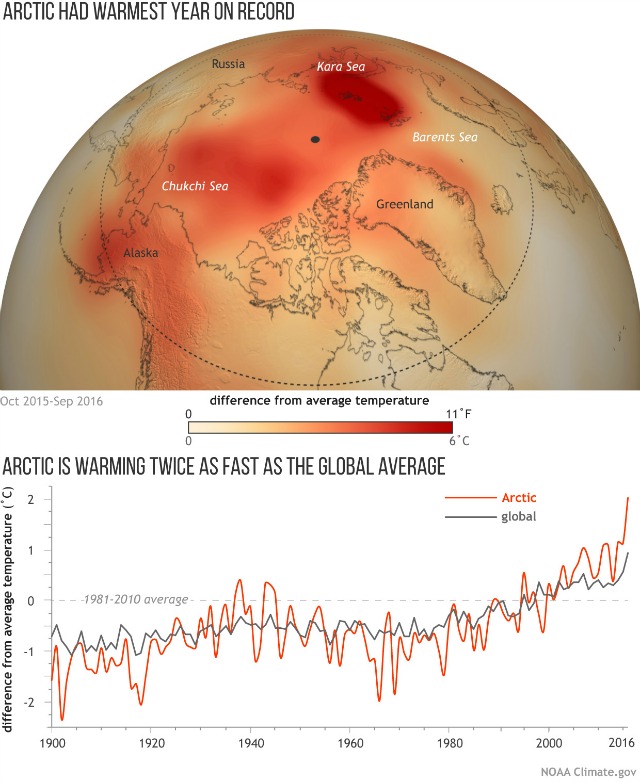 (map) Temperatures across the Arctic from October 2015-September 2016 compared to the 1981-2010 average. (graph) Yearly temperatures since 1900 compared to the 1981-2010 average for the Arctic (orange line) and the globe (gray). NOAA Climate.gov map based on NCEP reanalysis data from NOAA’s Earth System Research Lab. Graph adapted from Figure 1.1 in the 2016 Arctic Report Card.

And this Arctic-specific data has repercussions far beyond the region.

“What happens in the Arctic doesn’t stay in the Arctic,” Mathis said to the Associated Press. “The lower 48 [states] may have to deal with more extreme weather events in the future.”

Scientists who produced the annual Arctic Report Card warned the situation was changing so quickly it was “outpacing our ability to understand and explain” what they were witnessing.

They even suggested the word glacial could no longer be used to mean a slow pace and should be redefined to refer to something that was “rapidly diminishing.”

According to Brenda Ekwurzel, a senior climate scientist and the director of climate science at the Union of Concerned Scientists, the “jaw-dropping” assessment from NOAA “is remarkable for two reasons.”

First, so many records were broken or ranked second in each respective observational period (see Table). The second reason is that change is happening so fast and with such great magnitude that NOAA included an addendum to log changes leading up to the report release.

Given that the Arctic changes are due to “our growing carbon emissions,” the only choice now, she said, “is to turn away from fossil fuels and embrace clean energy solutions. Protecting the future of the top of the world requires us to reduce emissions all around it.”

The new report was released at the American Geophysical Union meeting in San Francisco, outside of which scientists were protesting Trump’s attack on climate science.

“We are at a moment in history where we have to do something,” said Naomi Oreskes, a history of science professor at Harvard University, to SFGate.

“This is a frightening moment. We have seen how the reins of the federal government are being handed over to the fossil-fuel industry,” she added.

To see more about the Arctic Report Card, watch this video uploaded to YouTube by NOAA: