Bernie Sanders and others blasted Scott Pruitt’s anti-environment record on Wednesday, echoing scores of groups that oppose to his nomination 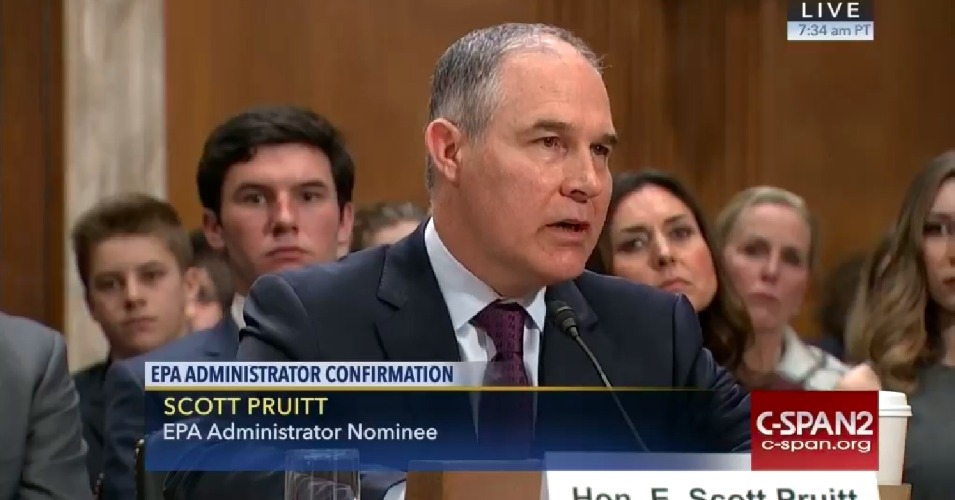 Sen. Bernie Sanders (I-Vt) and his Democratic colleagues on the Senate Environment and Public Works committee dug into Environmental Protection Agency (EPA) nominee Scott Pruitt on Wednesday, blasting his record of suing the very agency he’s been selected to lead, and putting his fossil fuel industry ties front and center.

As Ben Jervey and Steve Horn reported for DeSmog Blog, the morning hearing unfolded in something of a pattern, with “Republican members complimenting the [Oklahoma] attorney general and lobbing him softball questions, and the Democrats grilling him on his stance on climate science, his ties to the fossil fuel industry, and his perspective on what role the EPA has in actually, well, protecting the environment.”

“Ninety-seven percent of the scientists who wrote articles in peer-reviewed journals believe that human activity is the fundamental reason we are seeing climate change. Do you disagree with that?” Sanders asked Pruitt.

While Pruitt didn’t deny that humans are at least partially contributing to global warming, he wouldn’t be tied down on to what extent that is true. “I believe the ability to measure with precision the degree of human activity’s impact on the climate is subject to more debate,” he said.

“My personal opinion is immaterial to the job I’m carrying out,” Pruitt told the Senate committee.

Sanders scoffed in response. “You are going to be the head of the agency to protect the environment, and your personal feelings about whether climate change is caused by human activity and carbon emissions is immaterial?” he asked.

Sanders also briefly pressed Pruitt on why he didn’t do more, or at least say more, regarding the sharp increase in earthquakes in Oklahoma caused by the oil and natural gas drilling industry.

Pruitt said only that he was “concerned” about the quakes, and Oklahoma’s Corporation Commission is the primary body regulating that, not his office.

“If that’s the kind of EPA administrator you will be,” Sanders said, “you’re not going to get my vote.”

When it was her turn, Sen. Kirsten Gillibrand (D-N.Y.) spoke passionately about how environmental regulations impact human health. 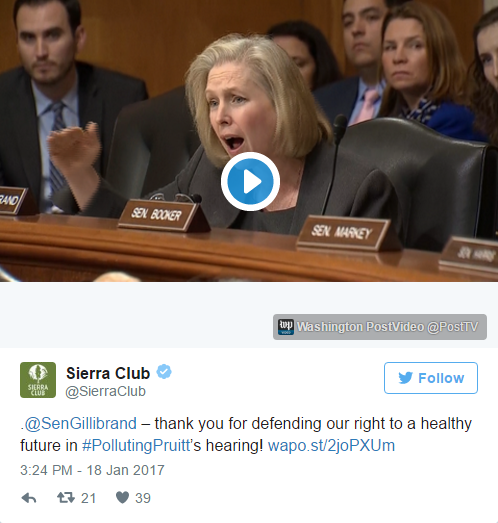 Sen. Jeff Merkley (D-Ore.) focused on a letter Pruitt’s office sent to the EPA—one revealed by the New York Times to have been written almost entirely by Devon Energy. “A public office is about serving the public,” Merkley said. “You used your office as a direct extension of an oil company rather than a direct extension of the public health of the people of Oklahoma.”

And Sen. Ed Markey (D-Mass.) “warned that Americans will view the EPA as ‘every polluter’s ally’ unless [Pruitt] commits to completely recusing himself from ongoing litigation Oklahoma has taken against the EPA,” as NBC News reported.

Pruitt would not do so.

The hearing took place as major scientific agencies announced that 2016 was the hottest year on record, for the third year in a row.