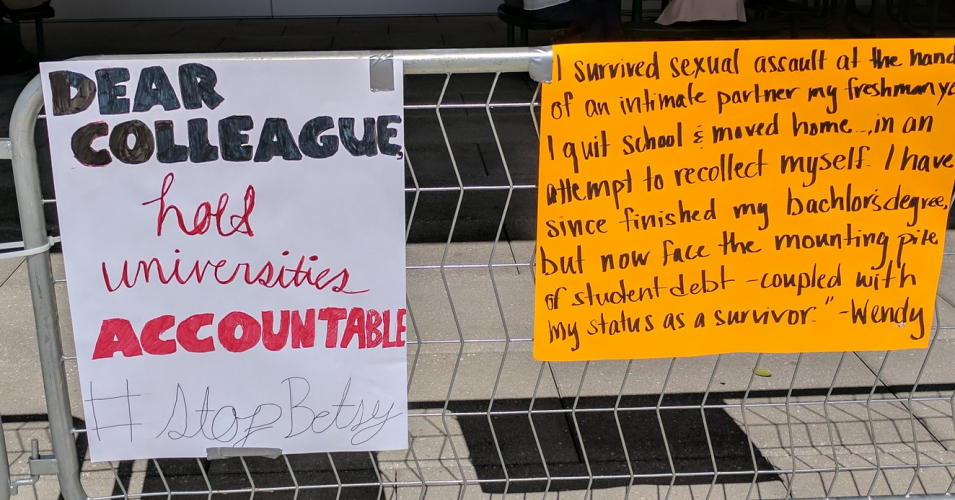 Protesters left signs outside the Department of Education on Thursday as Secretary Betsy DeVos announced she would open a comment period before rolling back Title IX guidance. (Photo: @gregpiper/Twitter)

Advocates for sexual assault survivors criticized the Trump administration’s announcement on Thursday that it would roll back Obama-era guidance on campus assault.

As dozens of protesters gathered outside to demand continued protections for survivors, Education Secretary Betsy DeVos said in a speech at George Mason University that the administration will begin a public comment period as it restructures its sexual assault policy—but she made clear that she would not uphold the previous administration’s guidance.

“The era of rule-by-letter is over,” DeVos said, referring to the Dear Colleague Letter that served as the basis for President Obama’s 2011 directive on Title IX, the federal law that prohibits sex-based discrimination at schools. The guidelines, outlined in the letter, require universities to swiftly investigate complaints of sexual assault and offer protections to survivors, and ban schools from retaliating against those who file sexual assault complaints.

DeVos said the guidance has “weaponized the Office for Civil Rights to work against schools and against students,” and criticized the procedures used by schools to investigate sexual assault cases, which allowed a lower standard of proof to be used in disciplinary hearings than would generally be used in criminal cases.

“Washington’s push to require schools to establish these quasi-legal structures to address sexual misconduct comes up short for far too many students,” DeVos said.

Critics of the Obama-era guidance, including DeVos, have said it pays insufficient attention to the rights of the accused. While observing the right to due process is imperative in any criminal justice system, sexual assault survivors’ advocates have denounced DeVos’s approach to reforming Title IX, particularly during the sole listening session she held in July on the matter, in which she included a fringe “men’s rights group” as well as survivors.

In an interview with the Washington Post, Jess Davidson, the managing director of End Rape on Campus said the meeting felt “a little bit like paying lip service to the importance of having survivors in the room.”

“It’s really telling us that we don’t matter, that our pain is not relevant to people in power,” Chessy Prout, a survivor of assault, told the Post.

DeVos’s critics also rejected the notion of that students are frequently accused of assault on false grounds. In a 2012 study, the National Sexual Violence Resource Center found that false accusations made up between two and ten percent of reported assaults, while 63 percent of assaults were never reported to the police—suggesting that crimes are actually under-reported.

“I think there’s been a really concerning false equivalence of the concerns of survivors and the accused throughout this entire process with the Department of Education,” Davidson said.

Only 2-8% of rape claims are false. #TitleIX is the only thing stopping universities from brushing 100% of rapes off as “false.” #StopBetsy

Less than 10% of campus rape reports are false. Betsy Devos wants to protect that # rather than the 90%+ that aren’t. #StopBetsy #TitleIX

Fatima Goss Graves of the National Women’s Law Center was skeptical about the impending comment period touted by DeVos in her speech.

“Don’t be duped by today’s announcement,” said Graves in a statement. “What seems procedural is a blunt attack on survivors of sexual assault. It will discourage schools from taking steps to comply with the law—just at the moment when they are finally working to get it right. And it sends a frightening message to all students: Your government does not have your back if your rights are violated. This misguided approach signals a green light to sweep sexual assault further under the rug.”

While going through college I accepted my journalism professor’s task of covering a rape on campus. Being a rape survivor myself, I believed I could take this one on and do a good job. I interviewed the victim. I also interviewed the accused. But nothing prepared me for the administration’s reaction first to the crime, and then to my coverage of it. At one point the President of the University asked me to do a nice story about flowers instead of this one.

What should shock and disgust you is that colleges will not report rapes unless they are forced to. They want the donors and parents that give the schools money to believe that nothing bad happens on their campus, and most of these crimes are covered up, squashed in administrative bureaucracy and hid from those most affected by what the true dangers on campus’ really are.

What Betsy Devos is doing is allowing this fabrication to continue, ignoring the statistics and facts. Defending the accused and saying their rights are being violated is the equivalent to a doctor performing a lobotomy to cure a sinus infection.