“As Kinder Morgan tries to force through a pipeline without our consent—risking polluting the land and poisoning our rivers—we are rising up to create a resistance rooted in family, community, and hope.” 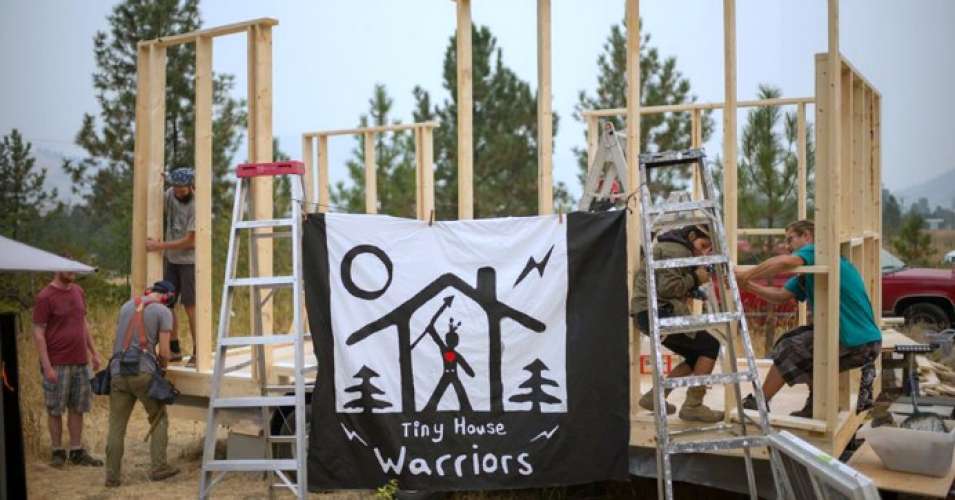 Greenpeace Canada helped build the first of 10 tiny houses in the path of the pipeline, which will cross through hundreds of miles of First Nations territory. (Photo: Ian Willms/Greenpeace Canada)

First Nations and allies in British Columbia, Canada, are protesting an expansion of the Kinder Morgan Trans Mountain pipeline by building 10 tiny houses in its proposed path, which runs through more than 300 miles of Secwepemcul’ecw, unceded tribal territory.

“We, the Secwepemc, have never ceded, surrendered, or given up our sovereign title and rights over the land, waters, and resources within Secwepemcul’ecw,” tribe leaders said in a statement, adding that they “have never provided and will never provide our collective consent to the Kinder Morgan Trans Mountain Pipeline Project. In fact, we hereby explicitly and irrevocably refuse its passage through our territory.”

Kinder Morgan announced on Wednesday that it had “selected or signed memorandums of understanding with six contractors with experience delivering pipeline and major infrastructure projects in British Columbia and Alberta, in anticipation of planned construction activities in September 2017.”

Activists with the “Tiny House Warriors: Our Land is Home” project began constructing the tiny houses earlier this week. To minimize the environmental impact, the houses will be partly made of recycled materials and outfitted with solar power. They plan to complete all 10 houses this month, just as construction on the pipeline is slated to start.

“As Kinder Morgan tries to force through a pipeline without our consent—risking polluting the land and poisoning our rivers—we are rising up to create a resistance rooted in family, community, and hope,” Kanahus Manuel, a leader in the build and member of the Secwepemc Women’s Warrior Society, said in a statement.

“It’s going to take everyone to protect our lands and waters. We have the whole world watching because of Standing Rock,” said Manuel, who participated in the North Dakota protests. “Many people from Standing Rock want to come and help fight this—we have a lot of support. And we have a new generation that wants change. It’s coming from the youth and the young people. It’s their future.”

Manuel is not the first indigenous protester who has drawn comparisons to the months-long protests against the Dakota Access Pipeline.

“It is our Standing Rock,” said Coldwater Indian Band Chief Lee Spahan, when three First Nations filed a lawsuit in January to challenge the Canadian government’s approval of the expansion. “It is about our drinking water.”

In addition to ongoing legal battles and the tiny house project, environmentalists and First Nations people have planned a march for Saturday titled “Kinder Morgan, We Still Say No!” But despite mounting opposition to the project, the federal government is standing by its decision to approve the project last year.

Mike Hudema, a climate campaigner with Greenpeace Canada—which is backing the first house project—told the Calgary Herald the federal government’s support of Trans Mountain conflicts with its commitment to the Paris climate agreement.

“These homes are about creativity,” Hudema said. “They’re about hope. They’re about resistance and they’re about a more sustainable vision for the future.”

And rather than merely serving as powerful symbols of protest, Manuel said these tiny houses will also serve as homes for Secwepemc people.

“People will be living there,” she said. “We plan to utilize the spaces for language camps, traditional tattooing.”

“The Secwepemc Tiny House Warriors are creating community and building homes for their people,” Hudema said in a statement. “This is why we stand with them—the rightful defenders of their lands and waters—in this peaceful and courageous act of defiance.”

The project has garnered support from other high-profile green groups and environmentalists, including Canadian author and journalist Naomi Klein:

Members of Secwepemc First Nation are building Tiny Homes along the path of #KinderMorgan pipeline. Stand with them. #TinyHouseWarriors pic.twitter.com/KDIfEqxtLl

Had a great weekend with the #TinyHouseWarriors building homes to put on the KM pipeline route! These Secwepemc women will #stopKM! #cdnpoli pic.twitter.com/2NkKlSxMHN