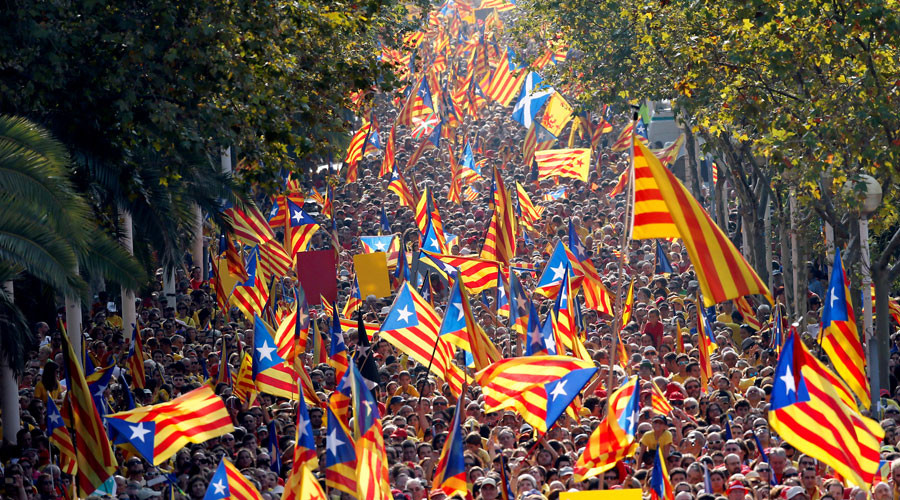 Catalans did not take the news that Spanish Prime Minister will move to impose direct rule on their region quietly on Saturday. Nearly half a million people marched in Barcelona soon after the prime minister’s press conference.

Carles Puigdemont, president of Catalonia, joined the demonstration before a planned speech responding to Mariano Rajoy’s statement that pending the approval of the senate, which his party controls, he would remove the Catalan government from power and call for a special election in the coming months.

The protesters chanted, “Freedom!” and “Rajoy, Rajoy, so you know we are leaving!”

People off to protest here in #Barcelona #Catalonia pic.twitter.com/rqCl6xvGkg

Thousands of Catalans were expected to protest Saturday afternoon after Spanish Prime Minister Mariano Rajoy announced he would take control of Catalonia by invoking Article 155 of the Spanish constitution, weeks after the region’s independence referendum.

Defying the majority of Catalan voters who approved of a split from Spain in Catalonia’s independence referendum this month, Rajoy spoke at a press conference about his plans to transfer the power of the region’s president, Carles Puigdemont, to the central government, and hold early elections in the next six months.

Forty percent of Catalonia’s 5.5 eligible voters cast ballots in the referendum, despite a show of force by Spanish police that left nearly 900 people injured ahead of the October 1 vote.

Ninety percent of those who voted approved of independence, according to the regional government. Officials said that in addition to police violence, Spanish law enforcement raided polling stations, resulting in the loss of 770,000 ballots.

Following the vote, large crowds in Barcelona last weekend called for peaceful negotiations to determine the next step, but Rajoy has rejected dialogue on the grounds that the Spanish government sees Catalonia’s referendum as illegal.

#Catalonia will be governed from Madrid by ministers of a party that got 8.5% of the vote at last Catalan elections. pic.twitter.com/W6avedq3ZS

Editorial note: You might wonder why the EU isn’t weighing in on this. The Conversation has an excellent piece outlining how the EU’s hands are tied in this matter.