“This is an alarming proposal which raises the possibility that armed federal agents will be patrolling neighborhood precincts and vote centers,” over a dozen secretaries of state tell Senate leaders. 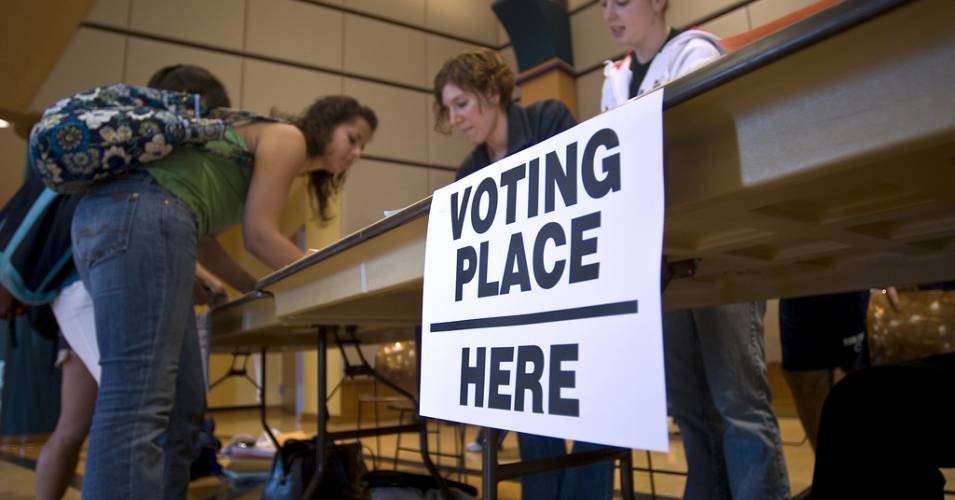 Civil rights advocates and secretaries of states are warning against a provision in a DHS reauthorization bill that would let the president dispatch Secret Service to polling places. (Photo: Penn State/flickr/cc)

Civil rights advocates and top election officials are expressing alarm over a section in the Department of Homeland Security reauthorization bill that would allow the president to send Secret Service agents to polling places.

“Who in their right mind would give this vulgar talking yam this kind of power?” quipped Charles P. Pierce at Esquire.

The House passed its version of the legislation on July 20, 2017. It includes a provision that would amend the federal law barring troops at polling sites by adding the text: “This section shall not prevent any officer or agent of the United States Secret Service from providing armed protective services authorized under section 3056 or pursuant to a presidential memorandum at any place where a general or special election is held.”

The Senate Homeland Security and Governmental Affairs Committee passed the bill on Wednesday, though Ben Voelkel, a spokesman for committee chairman Sen. Ron Johnson (R-Wis.), told the Boston Globe it didn’t include the provision in question. If the full Senate passes the bill, the House and Senate versions would need to be reconciled.

Given the potential threat, 19 bipartisan secretaries of state and elections commissioners sent a letter (pdf) to Senate Majority Leader Mitch McConnell (R-Ky.) and Minority Leader Charles Schumer, (D-N.Y) urging them to keep the provision, which they say has “unprecedented and shocking language,” out of the final version.

“This is an alarming proposal which raises the possibility that armed federal agents will be patrolling neighborhood precincts and vote centers,” the letter says.

On Friday, my colleagues from across the country and from both political parties asked the leadership of the US Senate to take a provision out of the DHS reauthorization that would allow the President to order Secret Service agents into polling places. pic.twitter.com/hxOd6UfykT

Referring to current federal code, they write: “This longstanding and carefully crafted statute ensures the right of voters to cast their ballots under the limited authority of civil officers rather than law enforcement. Secretaries of State across the country agree that there is no discernible need for federal Secret Service agents to intrude, at the discretion of the president, who may also be a candidate in that election, into the thousands of citadels where democracy is enshrined.”

Among the signatories is Ohio Secretary of State Jon Husted, who said in a statement Friday, “The fact that the U.S. Senate would even consider enacting a law that would allow a president to place Secret Service agents in polling places is shocking.”

Fellow signatory Massachusetts Secretary of State William F. Galvin told the Globe,“This is worthy of a Third World country,” adding: “I’m not going to tolerate people showing up to our polling places. I would not want to have federal agents showing up in largely Hispanic areas.”

Kristen Clarke, president and executive director of the Lawyers’ Committee for Civil Rights Under Law, said Monday that the plan “is both chilling and unprecedented,” and pointed to the administration’s efforts to suppress the vote.

“History has shown that the presence of law enforcement at the polls has the effect of chilling voter turnout, especially among minority communities. Any plans to send armed guards to polling places must be considered alongside President Trump’s recent issuance of an executive order disbanding his failed Commission on Election Integrity. It was clear from the start that President Trump launched the Commission to lay the groundwork to promote voter suppression efforts across the country,” she said.

“Two months after shuttering the Commission,” she continued, “President Trump now seeks to activate one of our federal government’s most secretive law enforcement agencies to depress and discourage minority voter participation in our midterm elections. In no uncertain terms, we condemn any plan to activate the Secret Service at our nation’s polling sites.”

Former Labor Secretary Robert Reich, for his part, said, “This is what dictators do in banana republics,” and encouraged people to “spread the word, and resist.”

A provision quietly inserted in a Homeland Security Department reauthorization bill would allow Trump to dispatch Secret Service agents to polling places. This is what dictators do in banana republics. Spread the word, and resist. https://t.co/kUb7DQIg4h