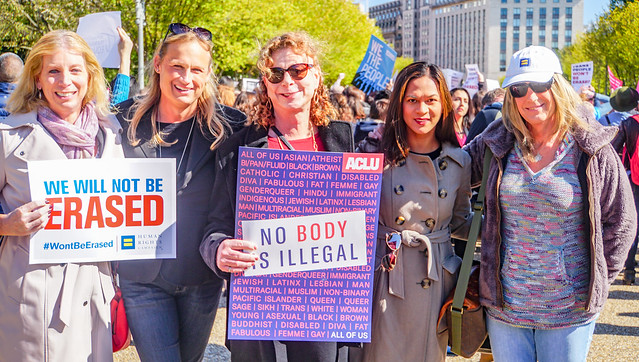 On Twitter, the ACLU said the proposal “aims to let government contractors fire workers who are LGBTQ, or who are pregnant and unmarried, based on the employers’ religious views.”

“This is taxpayer-funded discrimination in the name of religion. Period,” said the ACLU. “Nearly one-quarter of employees in the United States work for an employer that has a contract with the federal government. This rule seeks to undermine our civil rights protections and encourages discrimination in the workplace—and we will work to stop it.”

BREAKING: The Department of Labor just proposed a rule that aims to let government contractors fire workers who are LGBTQ, or who are pregnant and unmarried, based on the employers’ religious views.

This is taxpayer-funded discrimination in the name of religion. Period.

The rule is expected to be published in the Federal Register on Thursday, at which point the public will have 60 days to submit comments on the proposal.

As Bloomberg Law reported Wednesday, the rule “would cement current exemptions that ‘religion-exercising organizations’ can use to shield themselves from bias claims for hiring decisions and other actions motivated by religious belief. That includes religious entities as well as ‘closely held’ companies acting in accordance with an owner’s religious belief.”

Buzzfeed‘s Dominic Holden noted that the proposal would permit companies with federal contracts to discriminate on the basis of ethnicity, national origin, race, sex, and other characteristics, provided that the business presents a religious justification.

“The policy, for example, could apparently allow a company that supplies machinery to the federal government to fire a woman simply because she’s a lesbian if they obtain a religious exemption,” Holden reported. “The new rule would not eliminate longstanding nondiscrimination orders, but rather expand exemptions to them.”

Vanita Gupta, former head of the DOJ’s civil rights division and now president and CEO of the Leadership Conference on Civil and Human Rights, called the Trump administration’s proposal “unconscionable” on Twitter.

“This will not stand,” Gupta said.

The Labor Department’s rule comes less than 24 hours after reports that the Trump Justice Department is pushing for the Supreme Court to rule that businesses are legally permitted to discriminate against transgender employees.

→ Under Obama, the EEOC solidified that businesses can’t discriminate against LGBTQ people

→ Trump’s Justice Dept is trying to reverse this stance

→ Trump and his cronies want to destroy our well-being.

Mara Keisling, executive director of the National Center for Transgender Equality, said in response to the Labor Department’s rule that religious freedom “must be a shield to protect the marginalized, not a sword to attack them.”