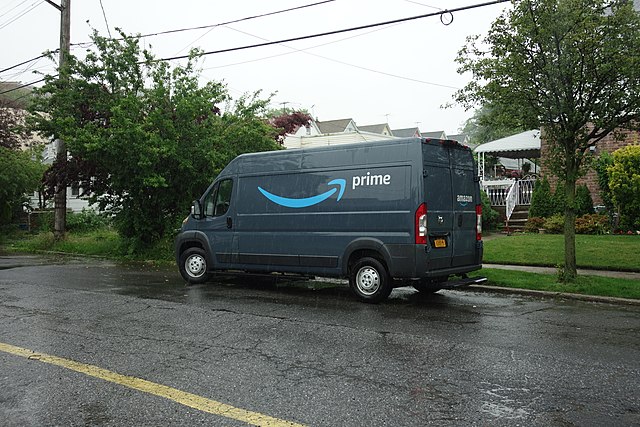 CNBC reported Wednesday that Amazon’s AI-powered, four-lens cameras—called Driveri—are being tested in a handful of contracted delivery vehicles. The cameras are manufactured by Netradyne, a San Diego-based startup, and record 100% of the time while vans are operating. They watch and record not only the drivers, but also the road and what’s happening around the vehicles.

“Safety is our top priority at Amazon and it’s our hope that this new system will give drivers and DSPs [delivery service partners] peace of mind while out delivering smiles to our customers,” Karolina Haraldsdottir, a senior Amazon manager for last-mile safety, says in an instructional video sent to DSPs.

Before they take it down, here’s the video Amazon circulated internally to roll out what amounts to the largest expansion of corporate surveillance in human history: using artificial intelligence enabled cameras on their fleet of thousands of delivery vans https://t.co/CJy1jPj134 pic.twitter.com/TFIdScGoUV

However, many drivers—who must agree to have the cameras installed—labor unions, and privacy advocates expressed alarm over the intrusive technology.

In an online petition, the digital rights group Fight For the Future warns that “Amazon will have roaming eyes in every neighborhood, shopping center, and intersection in our communities.” The petition continues:

[Amazon] will be watching everyone including your kids. Along with the millions of Ring doorbell cams, floodlight cams, and mailbox cams, Amazon will have the perfect panopticon in place to sweep up unprecedented amounts of data en masse. They already have 2,000+ partnerships with law enforcement and it seems super likely that they’ll start sharing footage from their vehicles the same way they share from Ring cameras—giving them access to license plates, biometric data, and enabling them to use facial recognition to track anyone’s movements across neighborhoods and cities.

“Beyond fueling the expansion of the police surveillance state, this means even if you don’t use Amazon you’re going to be in their system, being monitored, and targeted,” the petition states.

In a statement, Fight for the Future deputy director Evan Greer said that “this amounts to the largest expansion of corporate surveillance in human history.”

Greer says the Amazon cameras will “violate everyone’s basic rights by constantly collecting and analyzing footage of our neighborhoods, our homes, and our children,” data she says “can and will” be shared with law enforcement, including U.S. Immigration and Customs Enforcement (ICE).

“There are essentially no laws in place to limit what commercial purposes Amazon can use this enormous trove of video footage for,” said Greer, who added that Fight for the Future is “demanding that Amazon immediately stop the roll out of this unsafe program” and urging Congress “to launch a full investigation into Amazon’s surveillance empire.”

That “empire” includes Rekognition, a cloud-based software as a service (SaaS) facial recognition technology sold to police and government agencies including ICE. Last June, Amazon announced a one-year moratorium on police use of Rekognition over concerns about algorithmic bias.

The move came at a time of increased public scrutiny of tech companies’ relationships with law enforcement in the wake of police killings of unarmed Black people including George Floyd and Breonna Taylor.

“When you layer a surveillance technology on top of a system that’s already discriminatory, it sort of automates, amplifies, exacerbates that discrimination, without rules in place to protect workers,” Greer told CNBC.

The Driveri controversy comes the same week that Amazon CEO Jeff Bezos—who has become the world’s first multicentibillionaire from selling products and services including surveillance technology—announced he is stepping down from the position to serve as executive chairman. His successor, longtime Amazon Web Services chief Andy Jassy, has been a staunch defender of the company’s surveillance products.