“The American model of health reform—throwing money at private insurers—cannot solve it.” 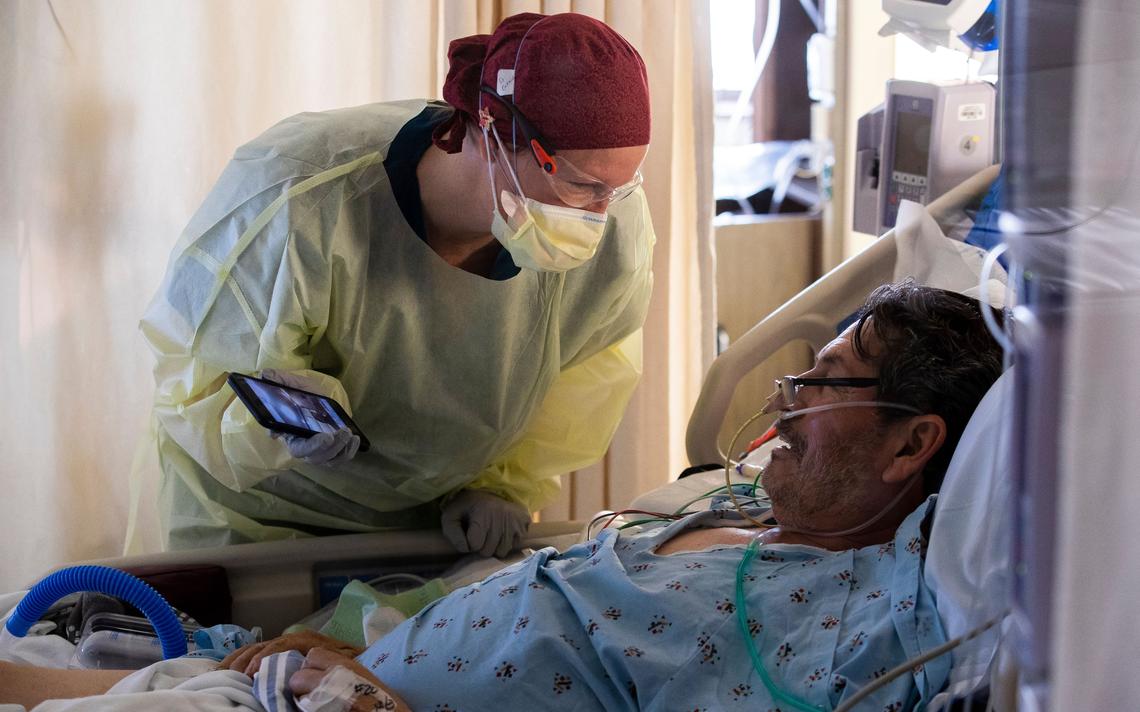 Dr. Christina Bastin De Jong, a critical care physician at Essentia Health-St. Mary’s Medical Center in Duluth, shares a light moment with Jimmy Porter, who was on the mend following a serious bout with COVID-19, on Thursday, Dec. 10. (Photo by Derek Montgomery for Essentia Health)

A new study released Wednesday morning shows that nearly 50 million Americans would be unable to afford quality healthcare should the need for treatment suddenly arise, a finding seen as further evidence of the immorality of a for-profit insurance system that grants or denies coverage based on a person’s ability to pay.

“People can’t afford their goddamn healthcare,” Tim Faust, a proponent of single-payer healthcare, tweeted in response to the new report. “Families spend less on food so they can make insurance payments. This problem is felt by all, but concentrated among poor people and black people. The American model of health reform—throwing money at private insurers—can not solve it.”

“The rot is pervasive and it runs deep,” Faust added. “People who can’t afford healthcare just don’t get healthcare. Wealthy men get to live fifteen years longer than poor men. We have condemned poor children to die from things which do not kill rich children. In America, sickness makes you poor; poorness makes you sick; then you die.”

According to the report by Gallup and West Health, 18% of U.S. adults—around 46 million people—say that if they needed access to quality healthcare today, they would not be able to cover the costs. The same percentage of adults report that, amid a deadly pandemic, someone in their household has opted to skip needed care over the past year due to inability to pay.

“The chances of any given household suffering from this form of healthcare insecurity are inversely related to annual household income, with 35% of respondents from low-income households—those earning under $24,000 per year—reporting forgoing care in the prior 12 months,” Gallup’s Dan Witters notes in a summary of the study’s findings. “That is five times the rate reported by those from high-income households (7%), defined as earning at least $180,000.”

“It is, however, shocking and kind of outrageous,” Saini added. “Our system has been structured for many years on the basis of private health plans and very deep dysfunction politically and within the medical industry. Americans have been facing this mammoth problem. It was there during, and looks like it’s going to be after, the pandemic…  Americans want, and need I’d say, a radically better healthcare system.”

The study comes two weeks after a group of House Democrats led by Reps. Pramila Jayapal (D-Wash.) and Debbie Dingell (D-Mich.) unveiled the Medicare for All Act of 2021, sweeping legislation that would transition the U.S. to a single-payer healthcare system over a two-year period. The new system would guarantee comprehensive medical care to every person in the U.S. for free at the point of service, eliminating premiums, co-pays, and deductibles.

According to an analysis released by consumer advocacy group Public Citizen earlier this month, a Medicare for All system likely would have prevented hundreds of thousands of coronavirus deaths in the United States, which has the highest Covid-19 death toll in the world.

“There is a solution to this health crisis—a popular one that guarantees healthcare to every person as a human right and finally puts people over profits and care over corporations,” said Jayapal, chair of the Congressional Progressive Caucus. “That solution is Medicare for All—everyone in, nobody out.”

In their new study, Gallup and West Health show that over 80% of Americans support “setting caps on out-of-pocket costs for both prescription drugs and general healthcare services for those who are insured by Medicare.” Sixty percent of Americans support “making Medicare available to everyone,” according to the report.

The study also finds that 65% of U.S. adults support lowering the Medicare eligibility age from 65 to 60, a proposal that congressional Democrats are reportedly planning to include in a forthcoming legislative package.