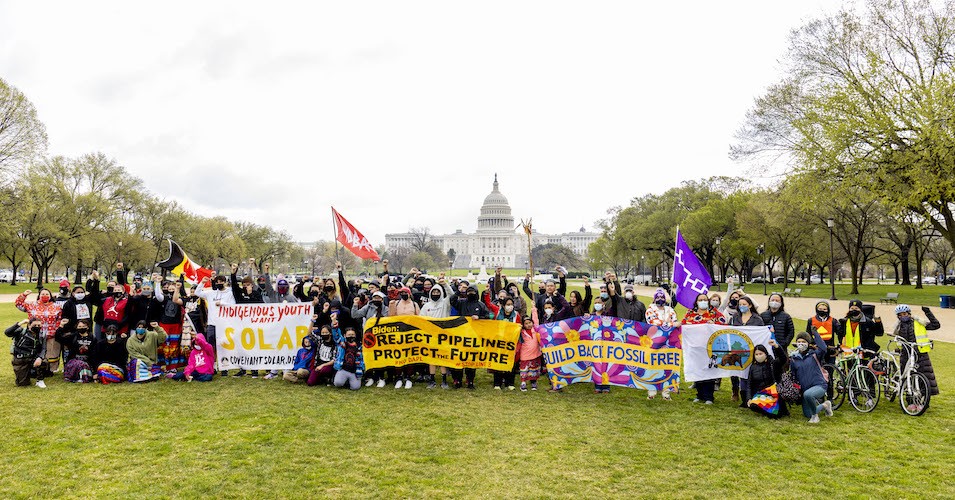 “We came to D.C. to give the fossil fuel snake back to the U.S. We don’t want the pipelines you snaked through our communities without our consent,” said organizers.

“Climate chaos is here. We cannot wait,” they said, and urged Biden to #BuildBackFossilFree.

.@IENearth’s @dallasgoldtooth closing out the rally at the US Army Corps of Engineers and starting the march to the @WhiteHouse to deliver the message to @POTUS: #BuildBackFossilFree pic.twitter.com/1bdOI2FtVm

There’s a 250 foot black snake here in front of the Army Corps of Engineers which the frontline youth will kill later in front of the White House. #NoDAPL #StopLine3 #BuildBackFossilFree pic.twitter.com/fM7riTsT6e

The two pipelines at the heart of the day of action are Enbridge’s Line 3, an under-construction pipeline that would bring roughly 760,000 barrels of tar sands oil per day from Alberta, Canada to Wisconsin, via North Dakota and Minnesota, and the Dakota Access (DAPL), which carries oil from North Dakota to Illinois, along its way crossing under the Missouri River near the Standing Rock Sioux Reservation. Both pipelines have been met with sustained protest from Indigenous groups and their allies, as well as fierce crackdown by law enforcement. Dakota Access is completed, but is facing a court-ordered environmental review.

Actions on Thursday included delivering over 400,000 petitions to the U.S. Army Corps of Engineers demanding it shut down DAPL and stop the Line 3 pipeline; the symbolic killing of a 200-foot “black snake”; and the erection of tripods outside the White House.

TODAY: We stand in solidarity with the Indigenous Youth in Washington, DC demanding #StopLine3 and #BuildBackFossilFree @IENearth pic.twitter.com/iypz7Rp1kh

“We are here to tell the Biden administration we do not want the Dakota Access pipeline flowing under our rivers and to stop Enbridge’s Line 3,” said Danny Grassrope of the Cheyenne Rivers Grassroots Collective, who was chained to a tripod with a bike lock.

“Water is not an accessory,” said Grassrope, “it’s a necessity and giver of life.”

The Indigenous Environmental Network is encouraging supporters not involved in the live action to flood the White House with calls to revoke the pipeline permits.