“We will bring undocumented people out of the shadows and provide them with a pathway to citizenship, including those who courageously kept our economy running in the middle of a deadly pandemic,” said Sen. Bernie Sanders. 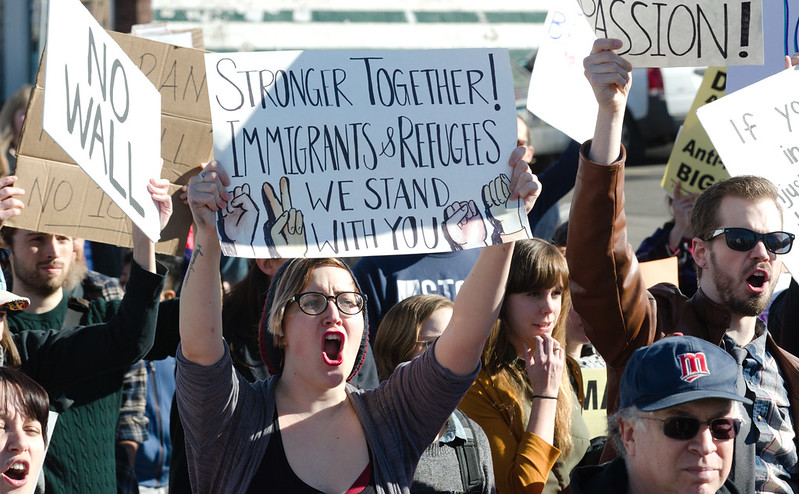 About 3000 people gathered at Powderhorn Park in Minneapolis to stand in solidarity with immigrants and refugees in February 2017. Photo: Fibonacci Blue/flickr/CC

The $3.5 trillion budget resolution introduced Monday by Senate Democrats and Sen. Bernie Sanders includes billions of dollars for Congress to establish a pathway to citizenship for millions of undocumented immigrants, giving progressives a reason to cheer.

“We will bring undocumented people out of the shadows and provide them with a pathway to citizenship, including those who courageously kept our economy running in the middle of a deadly pandemic,” said Sanders (I-Vt.), chair of the Senate Budget Committee and key architect of what he called “the most consequential piece of legislation for working people, the elderly, the children, the sick, and the poor since FDR and the New Deal of the 1930s.

The Senate Judiciary Committee has been given $107 billion and a “soft deadline” of September 15, The Hill reported. While “the package does not specify how many people or which groups would be covered by the legislation,” it instructs the committee to provide “lawful permanent status for qualified immigrants” as well as green cards “to millions of immigrant workers and families,” the news outlet noted. Lawmakers are also expected to allocate a portion of the funds for “border security.”

According to The Hill, “Democrats could make around 10 million people eligible for a path to citizenship—just shy of the 11 million people who would be affected by a bill from [President Joe] Biden that has stalled in Congress.”

Immigrant rights groups argued that the budget resolution’s inclusion of funding to facilitate citizenship for millions of undocumented people is the direct result of longstanding organizing efforts across the country.

The National Immigration Law Center celebrated Monday’s news, declaring that “this is our moment to win citizenship.”

🚨BREAKING: The Senate’s budget resolution text is out & it includes $107 billion to create a pathway to citizenship for millions of DACA recipients, TPS holders, farm workers & essential workers.

This is our moment to win CITIZENSHIP. NOW.#WeAreHomehttps://t.co/weMbxhx2tP

“This is a historic moment,” said Frank Sharry, executive director of America’s Voice. “The full weight of the Democratic Party is on board to legalize millions of hardworking immigrants who have helped America in our hour of need and who are deeply interwoven into our families and neighborhoods. It is not only a validation of the broad support by the American people for pathways to citizenship, but a recognition that to build our way out of this pandemic—to Build Back Better—we cannot afford to leave anyone behind.”

“Citizenship for America’s workforce is an investment in the American economy,” Sharry continued. “Immigrant youth, TPS holders, farmworkers, and essential workers are a key component of our labor force and our economy and are indispensable to our communities throughout the country. By allowing them to apply for a path to citizenship, we will reap the benefits of higher wages, reduced deficits, and accelerated GDP growth.”

“We anticipate that Republicans will do everything they can to knock citizenship out of the budget resolution,” he added. “They will deploy their fear-mongering and border-first talking points. But the overwhelming bipartisan support of the American people for citizenship for immigrants should prevail. Democrats should keep their eyes on what America wants, not what Republicans want Americans to fear.”

Good reminder from @AmericasVoice as Senate Dems unveil budget resolution that includes key immigration provisions: public support for a path to citizenship is overwhelming and broad (75% of Independents and majority of Republicans, too!). #WeAreHome pic.twitter.com/7Ejo4FOftK

According to a Data for Progress survey (pdf) conducted last month, 70% of likely voters—including 82% of Democrats, 75% of Independents, and 53% of Republicans—support establishing a path to citizenship for Dreamers, farmworkers, essential workers, and immigrants with TPS.

The Congressional Hispanic Caucus (CHC) also applauded “the inclusion of immigration reform provisions in the budget resolution,” while urging senators “to oppose anti-immigrant amendments that could threaten the package’s prospects in the House of Representatives.”

“Providing a pathway to citizenship for the millions of Dreamers, TPS holders, farmworkers, and essential workers will be monumental for our economic recovery and is clearly pertinent to the budget reconciliation process,” Democratic Reps. Raul Ruiz (Calif.), Veronica Escobar (Texas), and Adriano Espaillat (N.Y.), said in a statement. “As the Senate undergoes the budget reconciliation process, we call on our colleagues to oppose provisions that would undermine immigration reform efforts.”

“The CHC remains a strong advocate for immigrant communities across our country and will continue working to ensure immigration is part of the budget reconciliation process, which will benefit our economy and our recovery,” added CHC Chair Ruiz and CHC Immigration Executive Orders and Budget Reconciliation Sub-Task Force Co-Chairs Escobar and Espaillat.

Although several people, including Rep. Joaquin Castro (D-Texas), argued Monday that granting citizenship to millions of undocumented workers will have a “major budgetary impact” and therefore should qualify for the reconciliation process, the move will be reviewed by Senate parliamentarian Elizabeth MacDonough, an unelected official.

MacDonough provoked outrage in February when she recommended—and Vice President Kamala Harris chose to accept—that a $15 minimum wage provision not be included in Democrats’ Covid-19 relief bill because she viewed it as a violation of the so-called Byrd Rule, which requires that all provisions of a reconciliation package have a direct, rather than “merely incidental,” impact on the federal budget.

Last month, Biden was denounced for saying that he would defer to the advice of MacDonough as to whether Democratic lawmakers can use budget reconciliation to approve a pathway to citizenship.

Biden’s comments came just three days after a federal judge ruled that the DACA program—which has shielded hundreds of thousands of young undocumented immigrants from deportation since it was implemented in 2012—is illegal.

“Are we going to let an unelected person decide on the lives of folks with DACA?” asked immigrant rights organizer Cristina Jiménez in response to Biden’s deference to the parliamentarian.