“We’re on strike for safe and stable schools and systemic change,” said the leader of the local teachers union. 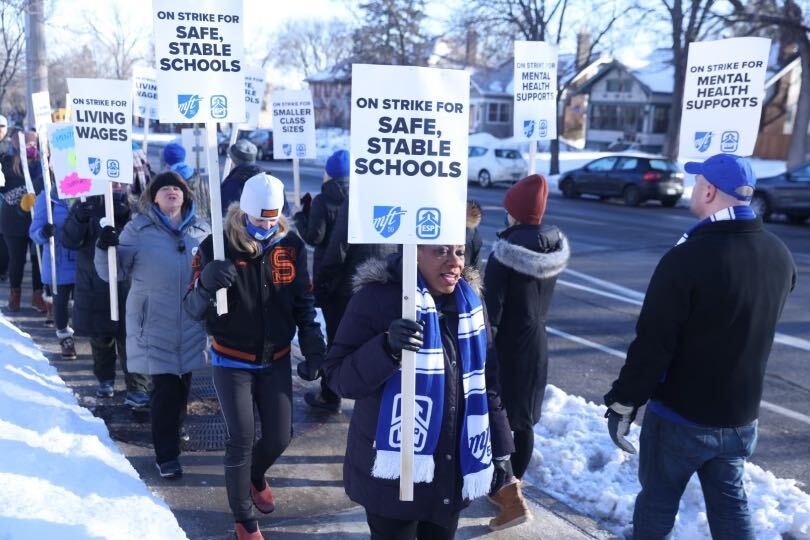 In addition to demanding caps on class sizes and counselors in every school, the union is seeking higher starting salaries for educational support professionals (ESPs) as well as “a 12% salary increase for first-year educators and 5% increase for second-year teachers,” the Star Tribune reported.

Minneapolis Public Schools (MPS) Superintendent Ed Graff, meanwhile, said Tuesday that “the union and district were ‘still very far apart’ and that while both sides have made concessions—union bargainers initially asked for a 20% salary increase for first-year teachers—the price tag for the union’s current ask is about $166 million over the district’s budget,” according to the newspaper.

However, Shaun Laden, president of the ESP chapter of the Minneapolis Federation of Teachers (MFT), countered district leaders’ claims that the union’s demands cannot be met due to a growing gap between revenue and expenses caused by decades of underfunding and made worse by rising costs and declining enrollment.

“We don’t believe we have a budget crisis in Minneapolis Public Schools,” he said Wednesday. “We have a values and priorities crisis.”

The Star Tribune reported that “union leaders are also taking aim at the state Legislature, which this year must decide how to spend a historic $9.3 billion surplus.”

During a picket in front of the state Capitol, Laden called for lawmakers to “release the dough!”

Minneapolis teachers rally at the state Capitol on Day 2 of their strike.

“We have 9 billion reasons to keep doing what we’re doing,” says union president Greta Callahan, a reference to the state budget surplus that teachers want a piece of. #mnleg pic.twitter.com/G8GROtAVhV

Ahead of a 90-minute bargaining session at MPS headquarters, district officials said Wednesday morning that they remained “committed to meeting and negotiating with MFT in order to reach a contract agreement in order to get our students back in their classrooms as quickly as possible.”

Classes for the district’s 28,700 students are canceled for the duration of the strike.

One MPS parent, whose family joined the picket line in support of “teachers and ESPs striking for the schools our educators and students deserve,” said that his kids’ teacher is “great” but overburdened with 41 students in her class.

We stand with our Justice Page teachers and ESPs striking for the schools our educators and students deserve! #SafeAndStableMPS #MFT4Kids pic.twitter.com/OLJkGb23Pj

Education Minnesota—a statewide affiliate of the American Federation of Teachers (AFT), the National Education Association (NEA), and the AFL-CIO that has roughly 90,000 members from 463 local unions—said that MFT Local 59 “won’t stop until they get the resources and supports their students need!”

DAY 2: Hand warmers, coffee and solidarity help ward off 0-degree windchills on the strike line at Sheridan and schools across Minneapolis. @MFT59 members won’t stop until they get the resources and supports their students need! #MFT4Kids #SafeAndStableMPS pic.twitter.com/uIXkB46Q5E

The Minneapolis teachers’ strike—the first educational work stoppage in the city since 1970—began Tuesday morning after union leaders and district officials failed to reach a resolution by a Monday night deadline.

Following 13 months of negotiations, “the district has failed to deliver a contract that makes vital investments in our students, our educators, and our community,” MFT said in a statement. A whopping 97% of teachers and 98% of ESPs voted to authorize the strike.

Greta Callahan, president of the teachers’ chapter of MFT, told the New York Times on the eve of the strike that MPS continues “to look at our proposals and say, ‘These are add-ons that we can’t afford.’ And we’re saying, ‘No, you need to rewrite the whole system and do things differently.'”

“We’re ready to get back to the table,” she added. “We want this to be the shortest strike possible.”

According to MFT Local 59, bargaining priorities include:

“The federal government has provided an unprecedented amount of recovery funding to school districts to address problems related to the pandemic, including student recovery, staff shortages, and school safety,” Weingarten said in a statement. “There is no excuse for districts to make cuts in light of this historic infusion of funds.”

Pringle echoed that sentiment, saying that “with over $250 million in pandemic relief funds, the time is now to invest in the safe and stable schools that Minneapolis students need now more than ever.”

“The last two years have demonstrated that the status quo is not good enough,” said Pringle. “Minneapolis students and their families have weathered a pandemic, continued police violence, and an economic system that has left students, their families, and educators behind. These students deserve class sizes small enough for one-to-one attention as well as investments in mental health services and social-emotional learning.”

“MPS has the resources to make these investments,” she added. “The question is whether they value Minneapolis students as much as their educators do.”

Denise Specht, president of Education Minnesota, said that “nearly 90,000 educators across Minnesota are standing with our union family in Minneapolis because what they’re fighting for is what we’re all fighting for: Schools that will give every student the chance to pursue their dreams.”

“The same issues are being negotiated all over the state, from living wages for ESPs, to more mental health supports for students, to managing the crushing caseload for SpEd teachers, to recruiting and retaining more teachers of color, to creating time for educators to give their students enough individual attention,” said Specht. “We’re in a rich state with a $9.25 billion surplus. No educator should have to fight this hard for the schools our students deserve, but if that’s what it takes, we’re with you.”

Writing in The Nation, he argued that the stakes of the Minneapolis teachers’ strike extend far beyond Minnesota, given that the pandemic “has pushed public education to a breaking point across the country” and put its future in “unprecedented limbo.”

“No matter what happens in this struggle, its political impact will certainly reverberate well beyond Minnesota,” wrote Blanc. “A demoralizing defeat for teachers and ESPs will embolden pro-privatization, anti-union forces across the country to ramp up their efforts to dismantle public schools.”

“A victory, in contrast, will infuse fights against K-12 with a much-needed jolt of hope,” he added, “and enable organized educators to reshape the political narrative over the future of our schools.”